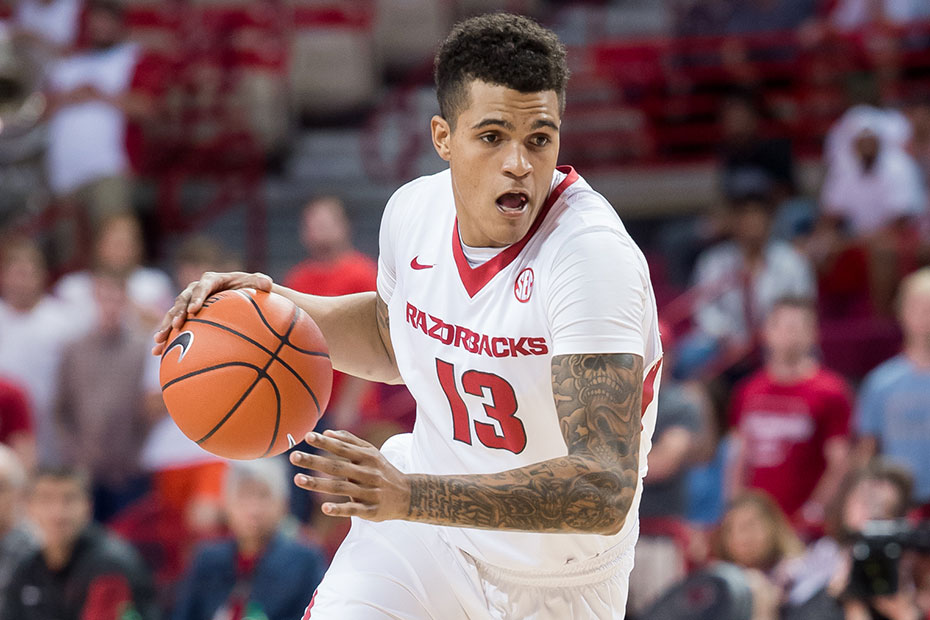 The win is the first after trailing by more than 10 points at the half since beating Georgia 72-68 on the road on Feb. 3, 2010. The Razorbacks improved to 49-2 against non-conference opponents inside Bud Walton Arena under Anderson.

UT Arlington used an 11-0 run to start the game to get ahead of Arkansas early. Down 17 with 12:37 left in the opening half, Arkansas went on a 15-3 run of its own, including 10 free throws, to bring the game within four. The Mavs sank a trio of three pointers late in the half to extend their lead and eventually take an 11-point lead to the locker room.

The Razorbacks responded fast in the second half, using a 20-2 run to take a 52-45 lead. Junior guard Jaylen Barford used a steal and one-handed slam to bring Bud Walton alive and give Arkansas its first lead of the contest.

Barford finished 6-of-12 from the field, scoring a career-high 17 points to go with six boards and two assists. Despite shooting 2-of-10 from the field, Dusty Hannahs scored 11 points to extend his streak of double figure scoring games to 11 dating back to last season.

Junior guard Anton Beard was big off the bench, scoring all 12 of his points in the second half, including a late jumper with the shot clock winding down to extend the Arkansas lead to five with less than a minute to go. Through three games this season, Beard has recorded 11 assists against only one turnover.

Arkansas finished 24-of-32 from the free throw line and forced UT Arlington into a season-high 18 turnovers.

QUOTABLES
“This was a good test for our basketball team and I thought they responded well because they did it with their defense. In the end, we made free throws and we had guys make plays down the stretch.” – head coach Mike Anderson

“I think the steals helped out a lot because it picked up our whole energy. We fed off of defense and emphasized it the whole time. Every timeout and dead ball, we were talking about defense.” – junior guard Jaylen Barford

UP NEXT
Arkansas will go on the road for the first time this season, as the Razorbacks will face the Minnesota Golden Gophers on Tuesday, Nov. 22 at 7 p.m. inside Williams Arena in Minneapolis.