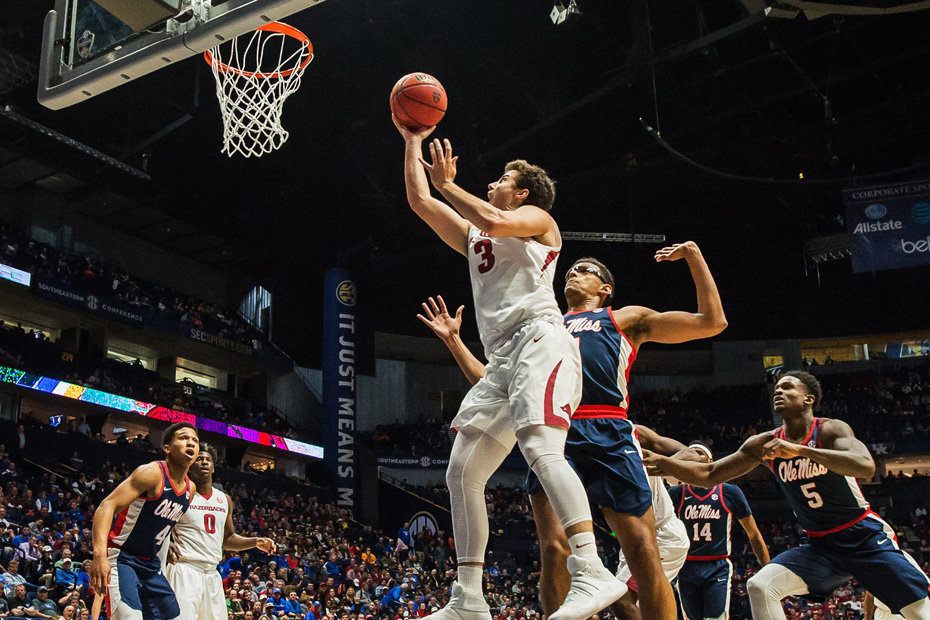 Hogs Hold Off Rebels To Advance To Semifinals

Arkansas (24-8)  improves to 6-0 in its last six contests decided by one possession and has won seven straight games decided by four points or less, including five of those coming away from Bud Walton Arena.

Arkansas moves on to the semifinals of the SEC Tournament for the second time in the last three seasons and will play 7th-seeded Vanderbilt Saturday afternoon at approximately 2:30 p.m. on ESPN.

The Razorbacks and Rebels (20-13) went back and forth the entire game. In a game that saw 12 lead changes and 13 ties, Arkansas was as opportunistic as one could be. The Razorbacks turned 13 Rebel turnovers into 22 points and outscored Ole Miss by 16 in points off turnovers.

The game was tied at 67 with 2:20 left but Ole Miss left the door open for the Razorbacks, missing five of its next seven shots. Four Macon free throws, a lay-up by Manuale Watkins and a huge blocked shot by Moses Kingsley with less than 30 seconds left was all the Razorbacks needed.

Kingsley started with Arkansas’ first six points of the contest thanks to two old-fashioned three-point plays, but the Rebels jumped to an early 17-8 lead. Being the last team to take the court in the tournament, the Razorbacks finally settled in and turned up the pace of play. Forcing a few turnovers and a couple bad shots, Arkansas turned defense into offense, scoring 16 points off nine Rebel first-half turnovers to knot the game up 40-40 at half.

UP NEXT
Arkansas will have a quick turnaround and face the Vanderbilt Commodores Saturday afternoon on ESPN. Tip-off is set for 25 minutes following the Kentucky-Alabama showdown that starts at 12 p.m. CT from Bridgestone Arena.