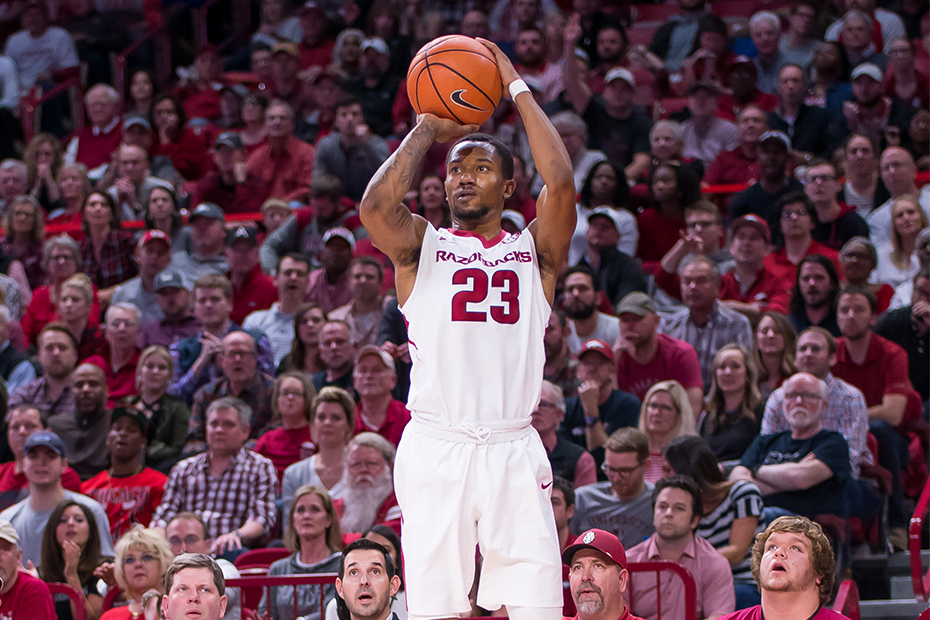 TUSCALOOSA, Ala. –  Victors of five of the last six games, the Arkansas men’s basketball team knocked off the Alabama Crimson Tide 76-73 Saturday night, as the Razorbacks picked up their third SEC road win of the season.

The win improves Arkansas to 20-9 overall, 9-7 in the SEC. It marks the fourth 20-win season in the last five years for the Razorbacks and solidifies that Arkansas will finish at or above .500 in conference play for the sixth-straight season.

For the second straight game, Arkansas got out quickly on its opponent, this time, taking an 11-4 lead against the Tide. The Razorbacks would eventually stretch its lead to 16-7 after a C.J. Jones three.

Early on, Arkansas worked inside out, moving the ball through big man Daniel Gafford. Gafford would check out of the game for a break and the Tide took advantage. Alabama would go on a 9-0 to tie the game at 16-16, after Arkansas failed to score for a span of four minutes, 50 seconds.

Bama would end the half on an 8-2 run, scoring the last six to cut the Arkansas lead to four at the break at 35-31.

Coming out of the locker room, Arkansas missed its first seven shot attempts, as the Tide hit four of its first six to take its first lead of the game at 41-37.

Arkansas’ bench production was big in the second half. Jones and sophomore forward Adrio Bailey combined for 20 of Arkansas’ 22 bench points, as Jones went 5-of-7 from the floor, including 3-of-3 from deep, as the Alabama native finished with 13 points. Bailey added seven points of his own. All of Bailey’s points came on his own 7-0, as the Razorbacks regained the lead with a little over eight minutes left in the game.

Bama would hit four straight free throws to take a one-point lead, before Arkansas would score nine straight to take its largest lead of the second half at 65-57. The Tide would make it interesting late, hitting a couple big three’s but Arkansas would take care of business at the free throw line to hold off Alabama.

Macon would lead Arkansas with 17 points, going 5-of-12 from the field. Gafford had a productive game, posting 11 points and seven rebounds, while Dustin Thomas matched Gafford with 11 points of his own. Jaylen Barford was the fifth Razorback to finish in double figures, adding 10 points.

Trey Thompson did not contribute in the score column but still had a big game, pulling down seven rebounds and recording five assists.

Arkansas returns home on Tuesday, as the Razorbacks host the No. 12 Auburn Tigers at 8 p.m. on SEC Network.

Game Notes
• The win gives the Razorbacks back-to-back wins in Tuscaloosa for the first time in 21 years.

• It is Arkansas’ second four-game winning streak (06-08) against Alabama in the all-time series that dates back to 1948.

• The win is the Razorbacks’ ninth SEC road victory during the last two seasons.

• During the last five years, the Razorbacks have posted a 34-15 (.694) regular season record in the months of February and March.

• Arkansas has won 37 consecutive games in which it has led at halftime. During Mike Anderson era, the Razorbacks are 122-7 when leading at the intermission.