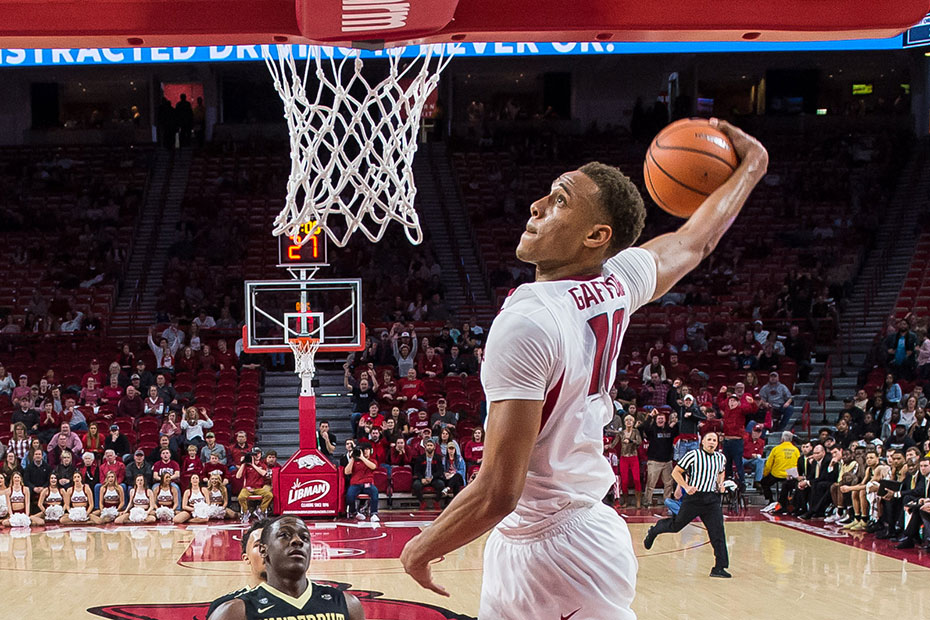 Hogs Turn Up Defense Against Commodores

FAYETTEVILLE, Ark. – The Arkansas men’s basketball team held the Vanderbilt Commodores to the lowest scoring output of the season by a Razorback opponent Saturday, defeating the Commodores 72-54.

The Razorbacks get back to .500 in SEC play, improving to 17-8 this season, 6-6 in conference action, after beating Vanderbilt for the fifth time in the last six meetings.

Arkansas’ defense was big, holding the Commodores to 25.0 percent from the floor on 14-of-56 shooting. No Commodore finished in double figures in scoring. Fifty-four points is the second-lowest scoring output by Vanderbilt Commodores, after scoring just 42 against No. 2 Virginia.

The Razorbacks struggled early on the offensive end, uncharacteristically turning the ball over five straight times to start the game. Despite the slow start, Arkansas weathered the storm and used an 19-2 run midway through the half to take a 26-15 lead. A big part of Arkansas’ run was the ability to make Vandy uncomfortable. The Razorbacks scored nine points off of nine turnovers in the first half.

The Razorbacks forced Vanderbilt to go a span of 10 minutes, 20 seconds without a made basket. The Commodores combined to shoot 4-of-26 in the opening half, a mark of 15.4 percent. They missed 15 of their last 16 shots in the half, including a streak of 12 straight, allowing Arkansas to take a 28-21 lead into the locker room.

In the second half, the Razorbacks poured it on. Arkansas went 17-of-32 (.531) from the floor, thanks in large part to creating easy baskets.

Senior guard Daryl Macon would lead the Razorbacks with his seventh straight 20-point game, scoring 21 on 7-of-17 shooting, going 4-of-6 from behind the arc. He would also pull down four rebounds and assist on four baskets. Macon is one 20-point game shy of tying Corliss Williamson for eight straight 20-point efforts in 1993-94.

Barford was the third Razorback to score in double figures, tying Gafford with 16 points on 6-of-12 shooting, including 4-of-6 from behind the arc. It marks the eighth time in the last 11 games that Barford has connected on three or more triples.

Game Notes
• The win gives the Razorbacks 13-plus victories in Bud Walton Arena for the eighth consecutive year and improves Arkansas to 33-6 in its last 39 games inside Bud Walton Arena.

• The Razorbacks are tied for the fourth-most home wins in the country during the Mike Anderson era at 108.

• During the Mike Anderson era, Arkansas is 119-7 in games it led at the half, including 34 consecutive victories.

• Arkansas is 13-1 in Bud Walton Arena this season with a +17.1 average margin of victory, including a +119 scoring margin in the first half.

• Daryl Macon is the first Arkansas player since Corliss Williamson in 1993-94 to score 20-plus points in seven consecutive games. “Big Nasty” had eight straight.

Tickets
Single-game tickets for the 2017-18 season are available now at the Razorback Ticket Center by calling at 1-800-982-HOGS (4647) and online by clicking here.