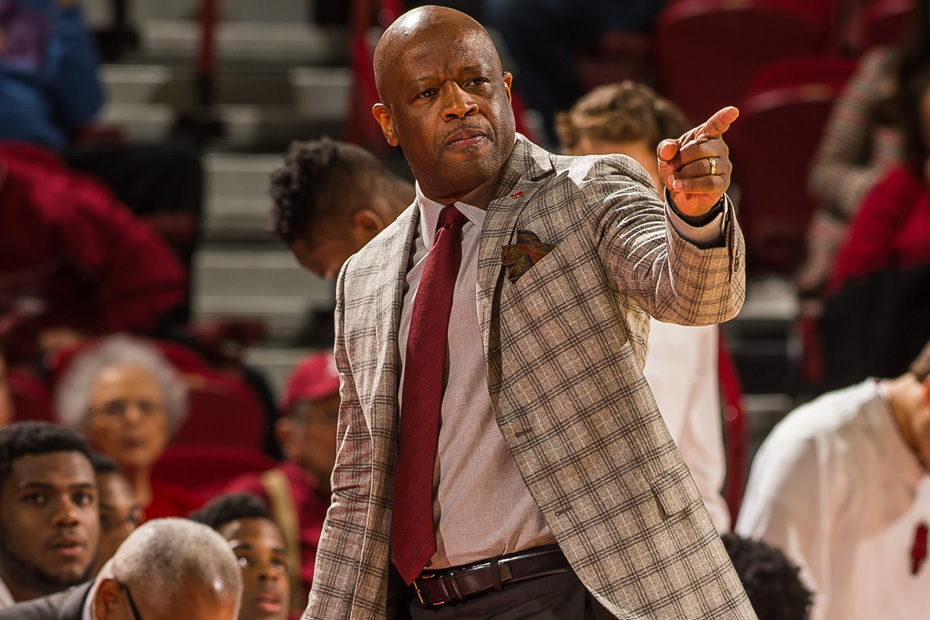 Hogs Use Defense To Stay Perfect At Home

FAYETTEVILLE, Ark. — The Arkansas men’s basketball team used a 78-62 victory over Stephen F. Austin Thursday evening in Bud Walton Arena to improve to 5-1 on the season.

The victory marks the 16th time since joining the Southeastern Conference that Arkansas has won at least five of its first six games to open the year.

Down a bucket early, Arkansas went on a 21-5 run to go up 23-9 with 9:15 left in the first half. The Razorbacks forced eight turnovers on SFA’s first 14 possessions, but the Lumberjacks were able to chop the Razorback lead to 34-28 before the break.

The Razorbacks forced 11 second-half turnovers and a season-high 21 miscues in the game to move to 27-2 under head coach Mike Anderson when forcing 20-plus turnovers. Arkansas’ pressure has forced 17-plus turnovers in three of the six games this season, after only doing so seven times a year ago.

SFA finished with 18 made field goals, making it the 20th time Arkansas has forced more turnovers than field goals allowed under Anderson.

The Hogs were led by senior Dusty Hannahs who finished with 15 points and two assists. Hannahs has scored in double figures in 14 straight contests and led the team in scoring in four of six games this season. Moses Kingsley put up 12 points to along with six boards and two assists.

Arkansas outscored SFA 20-4 on fast break points and has outscored its opponents in transition this season by a combined 98-27 margin.

QUOTABLES
“I thought our defense was the difference in this game, especially in the second half.  We always have a motto of getting multiple stops. When you get stops, it gives you a cushion. In the second half, we went up and down but we had some plays that were momentum changers. What we have to learn how to do is when we get a team down, to keep them down, no matter who we put in the game.  We need to get more guys playing at a high level.” – head coach Mike Anderson

“He is taking what the defense gives him. They are playing him hard so he’s getting to the free throw line, and I think that shows his versatility. He is scoring in a different way. He got some baskets in transitions and some nice assists as well. Those kind of plays do not go unnoticed. If you look at his development since he has been here I think he has become a more versatile scorer.” – head coach Mike Anderson on Dusty Hannahs

UP NEXT
The Razorbacks will have a day off before returning to Bud Walton Arena on Saturday, Dec. 3 to face Austin Peay at 7 p.m.