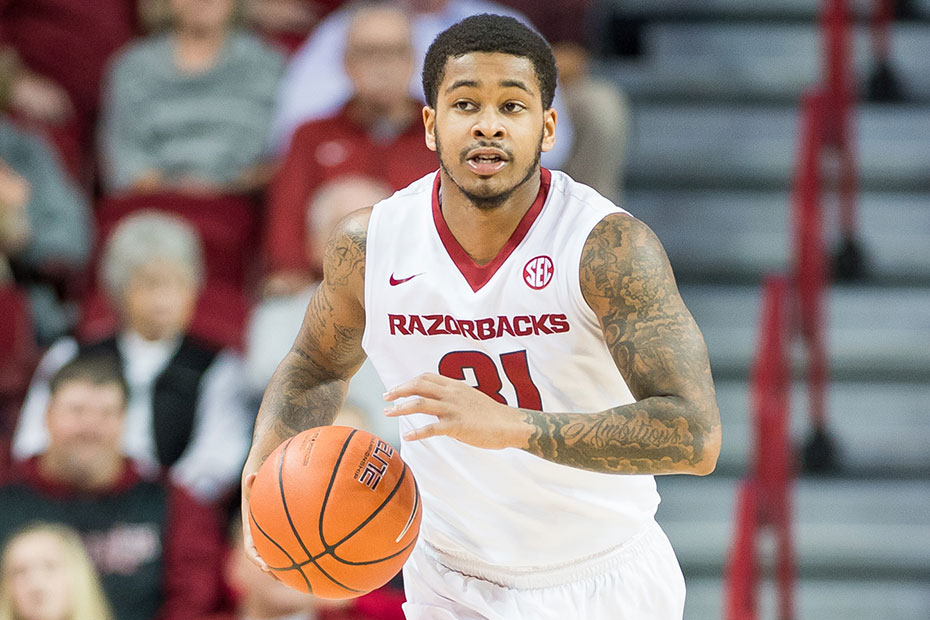 Hogs Use Depth To Top Vols In Knoxville

KNOXVILLE, Tenn. – The Arkansas men’s basketball team continued its winning ways on the road Tuesday evening, as Jaylen Barford and Anton Beard combined for 30 points off the bench to top the Tennessee Volunteers 82-78 inside Thompson-Boling Arena.

The Razorbacks (12-2, 1-1) win their third straight conference road game dating back to last year, with two of those coming at Tennessee.

Down four with 25 seconds remaining, Tennessee’s Detrick Mostella hit a floater in the lane and drew the foul to create a 3-point play and cut the Arkansas lead to just one point.

Daryl Macon took over from there, nailing six of his 12 free throws in the final 18 seconds to seal the 4-point road victory.

The first half was a seesaw affair with seven lead changes until Arkansas went scoreless for five minutes and 20 seconds and Tennessee went on a 14-0 run to a build a 13-point lead.

The Razorbacks fought back however, closing the first half on an 11-0 run, thanks to seven points from Barford and four more from Beard to cut the Tennessee lead to just two at the half.

Arkansas picked up right where it left off the second period, opening the half on a 16-7 run to create its largest lead of the game at seven points with 16:06 remaining.

Beard finished two points shy of tying his career-high, scoring a team and season-high 16 points to go along with three rebounds. He has now scored in double figures in four straight games. Macon scored 15 points, going 12-of-13 from the free throw line, his second 10-plus free throw performance of the year. Barford and Hannahs finished with 14 and 13 points, respectively.

UP NEXT
The Razorbacks will remain on the road as they travel to Lexington, Kentucky, on Saturday, Jan. 7 to face the No. 6 Kentucky Wildcats on the SEC Network at 7:30 p.m. CT inside Rupp Arena.