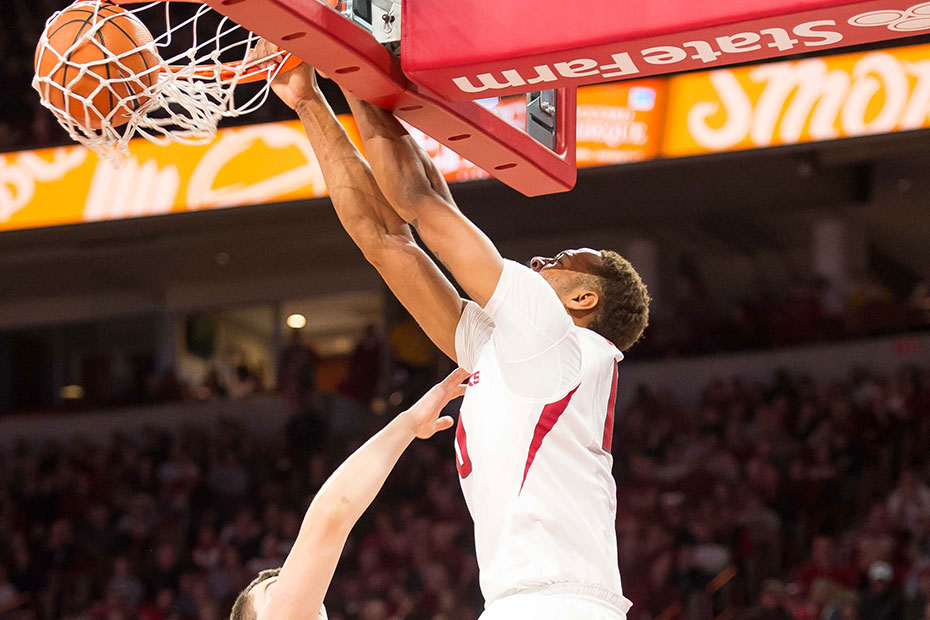 The Razorbacks found themselves down by six with less than five minutes in the contest, after once holding an 18-point advantage in the first half. Arkansas used a 12-4 run to close the game out and record the two-point win. Arkansas is 8-1 in its last nine contests decided by one possession, the best mark since the 1994-95 season.

Getting his first career start, freshman guard Darious Hall was all over the place early. After being on the receiving end of two low-post passes from senior forward Trey Thompson that resulted lay-ups, Hall slammed home his first dunk of the game, thanks to senior guard Daryl Macon, who cut through the Missouri defense and dished it off to Hall.

Arkansas had it in its mind to go inside early and the Razorbacks did and did so often. The Razorbacks would outscore the Tigers 20-4 in the paint in the first half. Hall scored eight straight points for Arkansas, all in the paint, as part of an 11-0 run that gave the Razorbacks their first double-digit lead in the game. Following a Missouri three-pointer, Arkansas would go on another 10-point run, combining for a 21-3 over a seven-minute span to go up 28-10.

Missouri would close the half on a 16-5 run, hitting six of its last nine shots, including four three’s to narrow the margin at the break, as Arkansas would lead 35-28.

Senior guard Jaylen Barford scored the first eight points for the Razorbacks in the second half, including five-straight to open the period, as Arkansas stretched its lead back out to double-figures.

Missouri would sneak back in the game, cutting it to two with 8:57 left in the second half, as Arkansas struggled to find its groove on offense. The Tigers would eventually retake the lead at the lead on two made free throws with a little over seven minutes remaining. Missouri would stretch its lead to six, before Arkansas would fight back to tie the game at 63-63.

Freshman forward Daniel Gafford scored seven of Arkansas’ last 10 points, but none more bigger than the two that gave Arkansas the lead and win.

Missouri would go to the other end of the floor and launch a desperate three that rattled out, as the Hogs went on to hold off the Tigers 65-63.

Gafford led Arkansas with a team-high 15 points, six rebounds and one block. Barford would add 13 of his own to go along with four rebounds. Hall had the most complete game of his young career, as the Little Rock native scored 10 points, five rebounds and two steals.

Macon may have only finished with eight points but he matched that total in the assist column, tying his career high for the third time this season.

•  Arkansas is 8-1 in its last nine contests decided by one possession, the best mark since the 1994-95 season.

•  The win gave the Razorbacks six victories in the last seven meetings against Missouri.

•  Arkansas improved to 7-4 against Missouri since the Tigers joined the SEC.

•  Arkansas has the fourth-most home wins in the country during the Mike Anderson era at 104. In 10 games in Bud Walton Arena this year, the Razorbacks are 9-1 with a +162 scoring margin.

•  During the last five seasons, Arkansas is tied for second in the SEC in league wins with 36. Missouri ranks 14th in the conference with 10 victories.

•  In games decided by four points or less, Arkansas has won nine of the last 10.