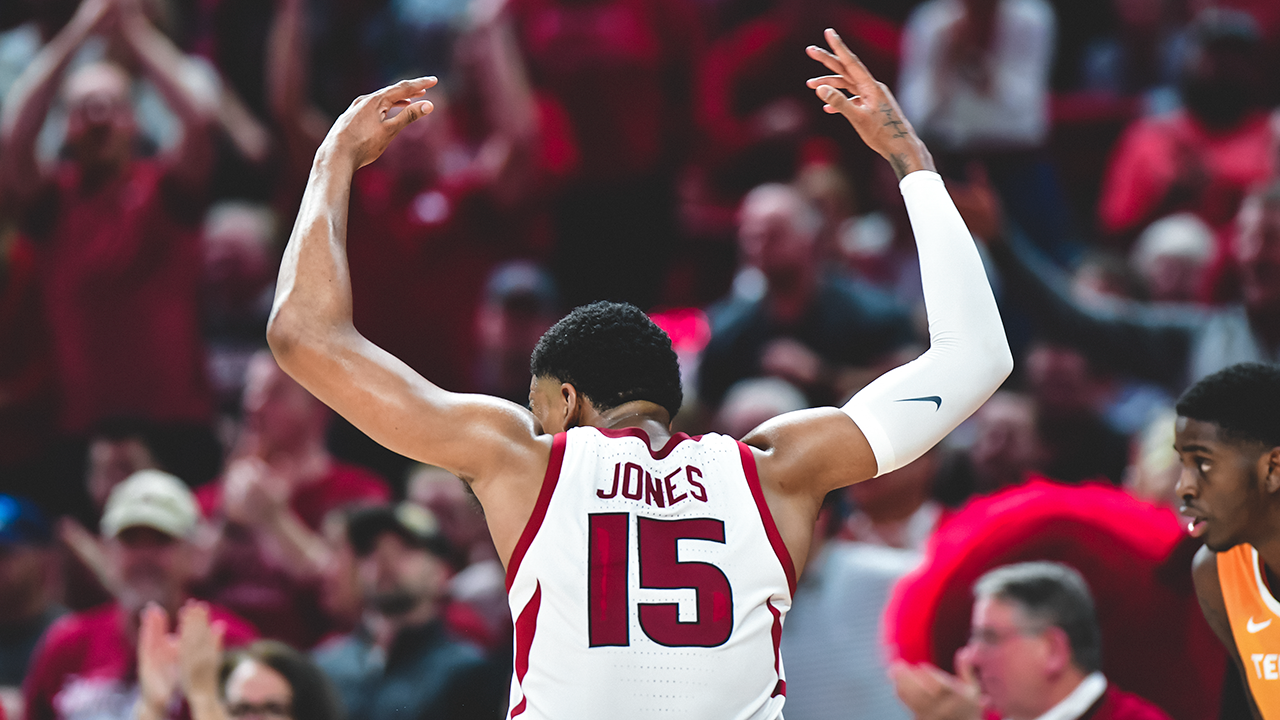 Jones Scores 37 in Win Over Tennessee

FAYETTEVILLE – Mason Jones scored 37 points and topped 1,000 for his career as a Razorback to lead Arkansas to an 86-69 victory over Tennessee Wednesday night at Bud Walton Arena.

Jones regained the scoring lead in the SEC with his ninth career 30-point game – seventh this season – while becoming the 44th Razorback to reach the 1,000-point plateau – now with 1,032. He is just the eighth Razorback to score at least 1,000 points in his first two seasons with the program. The junior was 11-of-19 from the field, making three 3-pointers, and 12-of-15 from the free throw line. He is the only Razorback to make at least 10 field goals and 10 free throws in an SEC game, a feat he has now accomplished twice (also versus Auburn this year).

In addition to Jones, Arkansas was able to avenge its 82-61 loss to the Volunteers on Feb. 11 thanks to the efforts of Isaiah Joe, Ethan Henderson, Jimmy Whitt Jr., and Desi Sills.

Joe, playing in his second game since having knee surgery on Feb. 4, scored 22 points, making 12-of-12 from the free throw line. He is the first Razorback since Daryl Macon (14-of-14 vs. Texas Dec. 17, 2016) and ninth Razorback to go perfect at the line with at least 11 attempts. Joe’s 12-of-12 is the best by a Razorback in an SEC game, becoming the fourth player with at least 10 attempts to be perfect at the line.

Whitt scored six points, had six rebounds and dished out four assists. However, his biggest contribution came on the defensive end. In the last meeting, Tennessee guard Santiago Vescovi scored 20 points, making 3-of-4 from 3-point range and 5-of-6 at the line, with eight assists. Wednesday, Whitt held Vescovi to six points (3-of-8 from the field and 0-of-4 from 3-point range) with zero assists and five turnovers.

Sills came off the bench for the second straight game and pumped in 13 points, making 3-of-5 from 3-point range, with four rebounds.

Arkansas will play at Georgia on Saturday (Feb. 29) before return home to host LSU for the final home game of the 2019-20 season. Arkansas will honor its seniors prior to the LSU game. Tipoff is set for 6:00 pm.