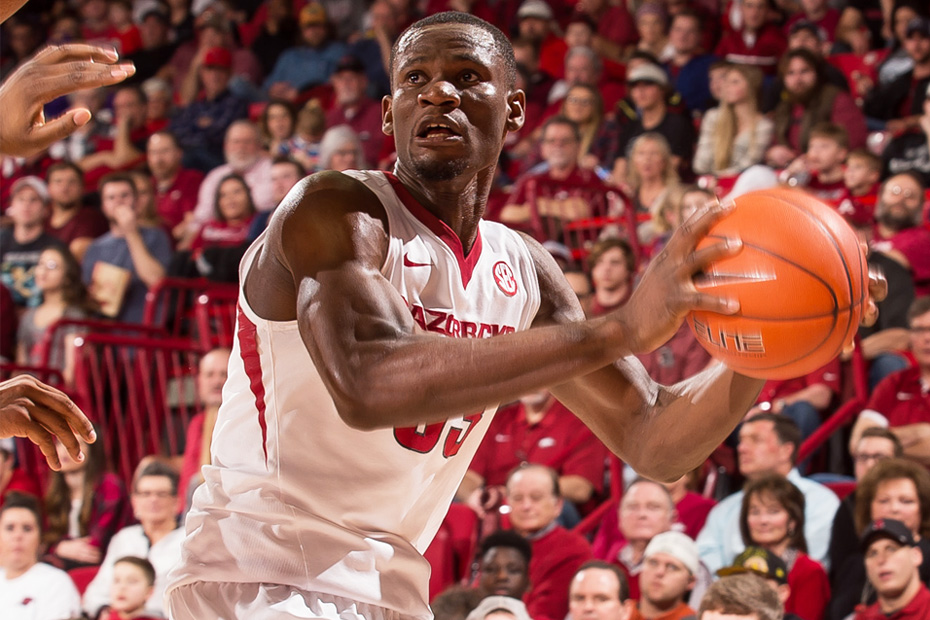 Coming into the game 23 points shy of becoming the 40th player in Razorback history to hit the century mark in career scoring, Kingsley had his best outing of the season, hitting 10 baskets, the most by a Razorback this season. The big man now sits at 1,001 career points and joins Oliver Miller as the only two Razorbacks in program history to reach 1,000 points, 600 rebounds and 200 blocks in a career.

Arkansas (15-4, 4-3 SEC) used an 8-0 run and a three minute, 16 second scoring drought by the Tigers to race out to an early 15-4 lead over LSU. The Tigers (9-9, 1-5 SEC) lingered around in the first half, keeping the Razorback lead within striking distance as Arkansas led 47-37 at the break. Three Razorbacks were in double figures at intermission with Kingsley leading all Razorbacks with 14 points. Anton Beard put up 12 points, while Dusty Hannahs sank all six of his first-half free throws to record 11 points. Arkansas went a perfect 11-of-11 from the free throw line in the first period.

Arkansas opened the second half on a 6-0 run to extend the lead to 16 points, but LSU kept fighting. The Tigers cut it to single digits with less than four minutes remaining, after hitting 16-of-19 shots in a nine-minute span. Arkansas held off LSU, scoring the games’ final six points to get the wire-to-wire victory.

The Razorbacks shared the ball well, tallying 20 assists for the sixth time this season. Arkansas is now 38-3 under head coach Mike Anderson when recording 20-plus assists, including 6-0 this season.

A big part portion of the assists came from Beard, who had a career-high seven dimes, the most by any Razorback player this season. He also tied a season-high in scoring with 16 points.

Daryl Macon scored in double figures for the 11th time in the last 12 games, putting up 15 points and seven rebounds. Jaylen Barford and Hannahs had 14 points each.

WHAT COACH ANDERSON IS SAYING
“Kudos to the greatest fans in the country. They showed up tonight and there was energy in the building. I was proud of our guys for finding a way. It was a game where fatigue became a factor, especially on the free throw line. It was one of those games we outscored them especially in the second half.”

UP NEXT
The Razorbacks hit the road next week, traveling to Nashville, Tennessee, on Tuesday to square off against the Vanderbilt Commodores. Tip-off is set for 7:30 p.m. on SEC Network.