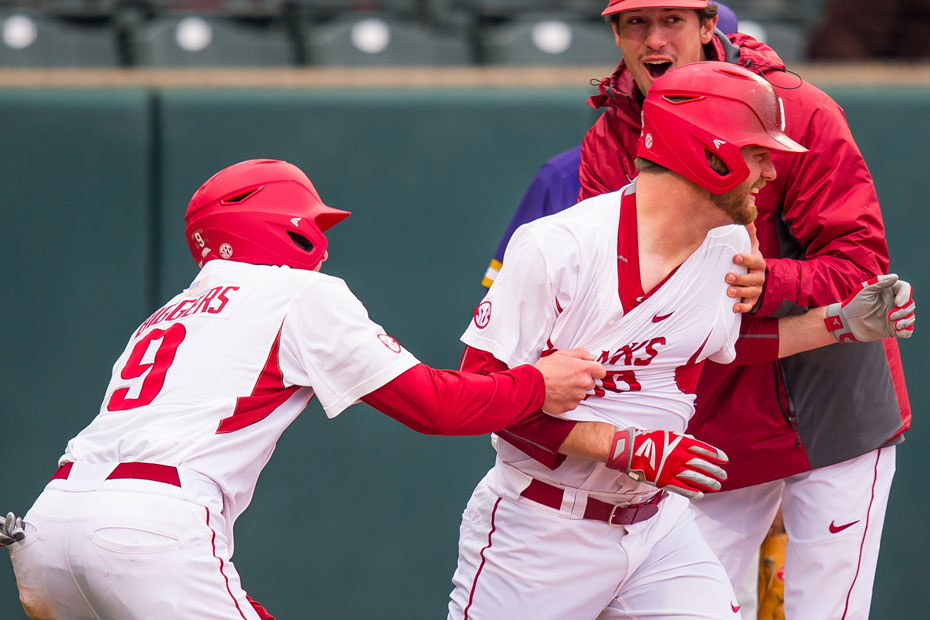 FAYETTEVILLE, Ark. – Senior Jake Arledge provided the bottom of the ninth walk-off single Tuesday afternoon, scoring pitcher Cannon Chadwick to defeat Alcorn State, 3-2, at Baum Stadium. Chadwick, who had entered the game in the seventh inning, batted for himself in the ninth, drawing a walk. Two batters later, Arledge singled through the right side for his second hit of the game, scoring Chadwick from second to win the game.

The walk-off victory is Arkansas’ second walk-off win in the last three games and gives Arkansas (13-4) its 11th victory at home this year. As for Chadwick, the right-hander had not batted in a game since his days in junior college when he hit .361 with 30 RBIs in 2012.

Four different Razorbacks recorded two hits in the game, while Arledge knocked in two of Arkansas’ three runs. The senior has hit safely in 13-straight games, the longest active streak on the team and the longest of his career. Matt Burch, Jaxon Williams, and Jax Biggers combined for six of the Razorbacks’ nine hits in the game.

Dominic Taccolini got the start Tuesday and looked strong for four innings, scattering five hits, while allowing just one earned run and no walks. Chadwick earned his second win of the season after holding the Braves scoreless at the end of the eighth and through the ninth.

Moments That Mattered
The Hogs got their first run of the game in an interesting way when an infield fly was called on Alex Gosser with one out and the bases loaded in the second. Both the right fielder and the second baseman for Alcorn converged on the pop fly, but could not make the catch. The umpire called an infield fly anyway, making Gosser the second out of the inning. Heads up baserunning by Jordan McFarland brought a run home for Arkansas, giving them the 1-0 lead.

Alcorn State’s bullpen kept the majority of the Razorback offense at bay through the middle innings, meanwhile, its offense took a 2-1 lead after the sixth inning with some timely hits. Arkansas was able to tie the game in the seventh inning on a sacrifice fly to centerfield by Arledge, his first of two RBIs in the game.

Including the game-winning single in the ninth, Arledge has nine hits in his last 17 at-bats and is hitting .377 for the year, while is leading the team. His 13-game hitting streak goes back to Feb. 25 when he went 3-for-4 against Bryant in game two of that series. Since then, he has recorded four multi-hit games and driven in 10 runs.

At the start of the eighth inning, head coach Dave Van Horn decided to move Grant Koch from the designated hitter to the catcher position. With that move, Arkansas lost its designated hitter, forcing the pitcher to move into the eighth spot in the lineup. By the time the lineup had turned over for Chadwick, Van Horn decided to leave Chadwick in and hit for himself in case the game went into extra innings. The move paid off as Chadwick drew the walk to put the winning run on base and allow Arledge to drive him in for the win.

Razorback Quotables
“We ended up winning the game but our defense did a great job. We throw a runner out at the plate in the first. We throw another runner out because our center fielder (Jake) Arledge makes a perfect throw to the cut-off man and he makes a perfect throw to the plate. Our third baseman (Matt Burch) makes a diving play with two outs and a runner on third, gets up and we throw another runner out. That’s three runs right there.”– Head coach Dave Van Horn on the team’s strong defense

“I was thinking ‘Hurry’. He’s not a sprinter. Cannon (Chadwick) acted like he had done it before. It’s like I told the boys after the game ‘It’s just baseball.’ Sometimes you put so much pressure on yourselves, you try to hit three-run homers when there’s one on or nobody on. Cannon just played the game. He hasn’t had an at-bat since he has been here and hasn’t really had one since high school. He lay off some borderline pitches that were balls and took a good aggressive swing because he wasn’t worried about it. That’s the way you play the game.” – Head coach Dave Van Horn on pitcher Cannon Chadwick batting and scoring the winning run

“Going to second wasn’t that bad. It was just a single and I just coasted in there. On the ball that Jake (Arledge) hit, I guess the second baseman was toying with me or something, so he was out of position. (Coach) Vitello was windmilling me so when I got to the plate—it crept on me pretty quick—and I knew I wasn’t going to slide so I just had to go in standing up.”– Cannon Chadwick on scoring the winning run

“When he got up to bat, the whole team just stopped what they were doing and was focused in on him. It was something special. You never see that with a pitcher that’s never hit before getting an at-bat, especially in a crucial situation at 2-2 in the ninth. The dugout went nuts when he walked. It was pretty cool.” – Jake Arledge on Cannon Chadwick hitting in the bottom of the ninth

Up Next
The Razorbacks and Braves will finish their two-game midweek series on Wednesday at 3 p.m. at Baum Stadium. The game will be broadcast on SEC Network+ and on the radio on the Razorback Sports Network.