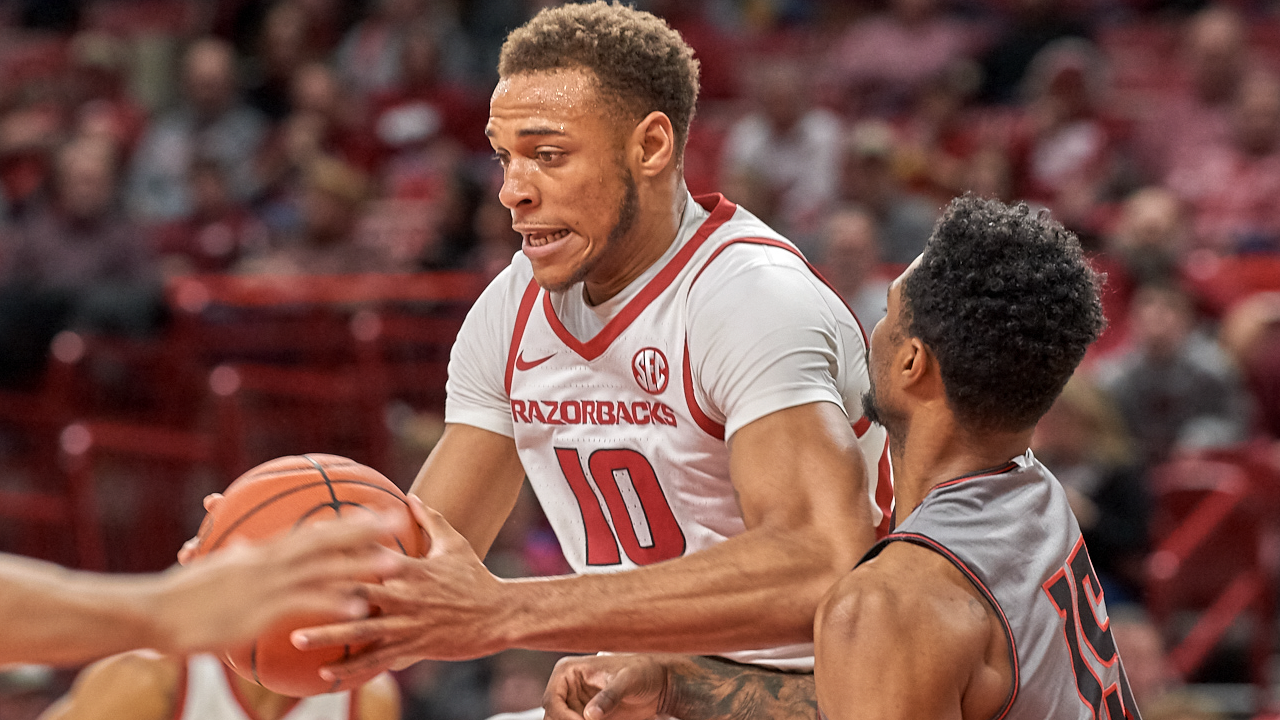 FAYETTEVILLE – Keyshawn Embery-Simpson tied his career high with 14 points – all in the second half – to help Arkansas rally past Austin Peay, 76-65, on Friday night at Bud Walton Arena in the final non-conference game of the season for both teams.

Embery-Simpson fueled a 20-5 Arkansas run that turned a 52-48 deficit into a 68-57 Razorback advantage. Embery-Simpson scored 12 during the run, including seven straight Arkansas points, and capped the rally with a 3-pointer with 4:12 left in the game. Embery-Simpson finished with all 14 of his points in the second half (nine minutes of playing time).

The Razorbacks (9-3) battled through foul trouble and a scrappy Austin Peay (8-5) team that outrebounded Arkansas 42-34.

The Governors, who entered with a six-game winning streak, led 50-46 midway through the second half when Arkansas’ leading scorer, Daniel Gafford, landed awkwardly in the lane and hit the floor with a right leg injury. Gafford was helped to the bench and went to the locker room for a brief period before returning to the game. His dunk off a Reggie Chaney feed gave the Razorbacks the lead for good at 54-52 with 8:22 left in the game.

Gafford recorded his sixth double-double in 12 games this season as he scored 16 points and pulled down 10 rebounds while adding four blocked shots.

Jabari McGee helped the Governors rally to pull within six, 68-62, scoring five of his 10 points, but the Razorbacks locked down the win on Jalen Harris’ 3-pointer from the left wing, just his third 3-pointer of the season in 27 attempts, giving Arkansas a 71-62 lead with 1:48 left.

Arkansas led 34-33 at halftime as Isaiah Joe scored 12 of his 15 points including four 3-pointers. Joe, who sat out the final 4:34 of the first half after picking up two fouls in the span of 21 seconds, hit his first three 3-point attempts, then later drilled his fourth to give the Razorbacks a 26-23 lead with 7:08 left in the first half. Joe added a career-high five steals on the defensive end.

Austin Peay took a 29-28 lead on a pair of free throws by Terry Taylor and could have extended the lead further but missed the front end of three straight one-and-ones in the final minutes of the half.

The Governors took their last lead of the half on Chris Porter-Bunton’s 3-pointer from the top of the key that gave them a 33-32 lead.

Jordan Phillips gave Arkansas back the lead with a pair of free throws with 48 seconds left in the half.

Arkansas will return to action Jan. 5 as the Razorbacks will open Southeastern Conference play at Texas A&M. Tip-off in College Station is set for 5 pm and the game will be broadcast on the SEC Network. This is Arkansas’ 28th season in the SEC and the Razorbacks are 15-12 when opening league play.

SECOND HALF: Arkansas went on 20-5 run with Embery-Simpson scoring 12 in the run.