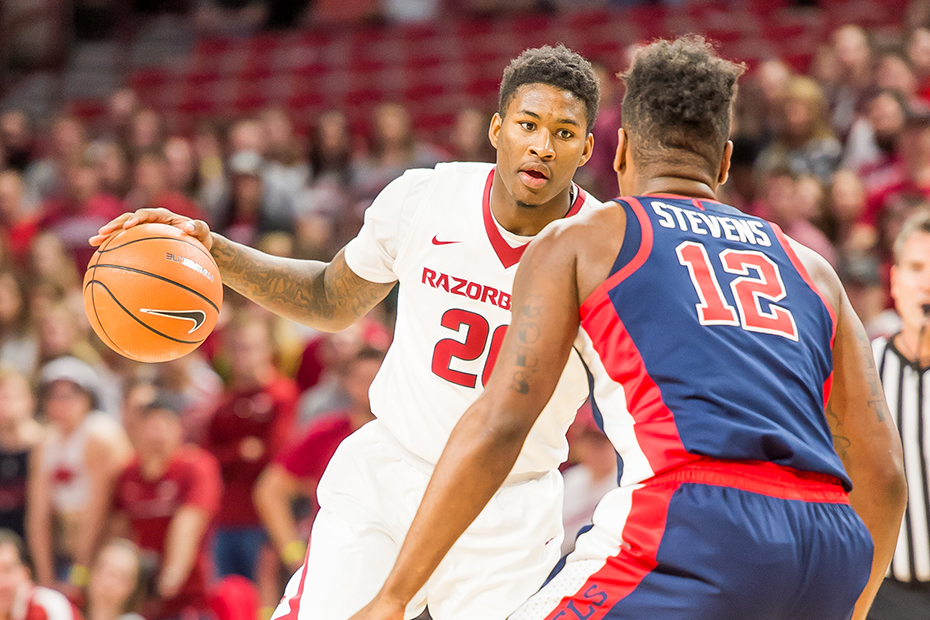 OXFORD, Miss. – Using an 18-1 run with less than eight minutes to play Tuesday night, the Arkansas men’s basketball team picked up its second road win of the season with a 75-64 victory over the Ole Miss Rebels.

The win is Arkansas’ eighth SEC road win in the last two seasons, as the Razorbacks are currently riding a three-game winning streak, after winning six of the last eight contests.

Tuesday night’s game did not start at a pace similar to the first meeting between the two teams in Fayetteville in late January. In a game that was expected to be a track meet, the Hogs trailed 18-14 a little under halfway through the first half, after missing 11 straight shot attempts.

The Razorbacks would soon figure out their shot, going on a 15-2 run to build an eight-point lead.

Senior Anton Beard was a big spark for Arkansas on the offensive end of the court, sinking both of his three-point attempts in the first half to led the Hogs at the break with eight points.

At one point in the first half, Ole Miss missed 13 straight shot attempts. The Rebels made just two of their final 26 attempts from the field to head into the locker room, trailing Arkansas 34-23. While the Rebels struggled to find their shot, Arkansas hit seven of its last 14 attempts to take a nine-point lead into the break.

After Arkansas made its first basket of the second half and stretch its lead to 13, Ole Miss ran off an 13-1 run, hitting four consecutive shots to pull within one.

Arkansas’ plan to start the first half was to go inside to Gafford and it worked. Gafford scored the first seven points of the half for Arkansas and would finish with 19 points and six rebounds, hitting seven of his 10 free throw attempts.

The Razorbacks got big minutes from freshman guard Darious Hall. Up one, the Little Rock native was the catalyst for a 18-1 Arkansas run to stretch Arkansas’ lead to 18. Hall and Beard would combine for 11 of Arkansas’ points in that run to open the game, as Arkansas would cruise to a 75-64 win.

Hall picked up his first career double-double, recording 14 points, a career-high 11 rebounds and tied a career high with three assists, after going 3-of-4 from behind the arc.

Game Notes
• During the Mike Anderson era, Arkansas is 120-7 in games it led at the half, including 35 consecutive victories.

• It is Arkansas’ fourth straight win against Ole Miss for the first time since the 1994 National Title season.

Tickets
Single-game tickets for the 2017-18 season are available now at the Razorback Ticket Center by calling at 1-800-982-HOGS (4647) and online by clicking here.