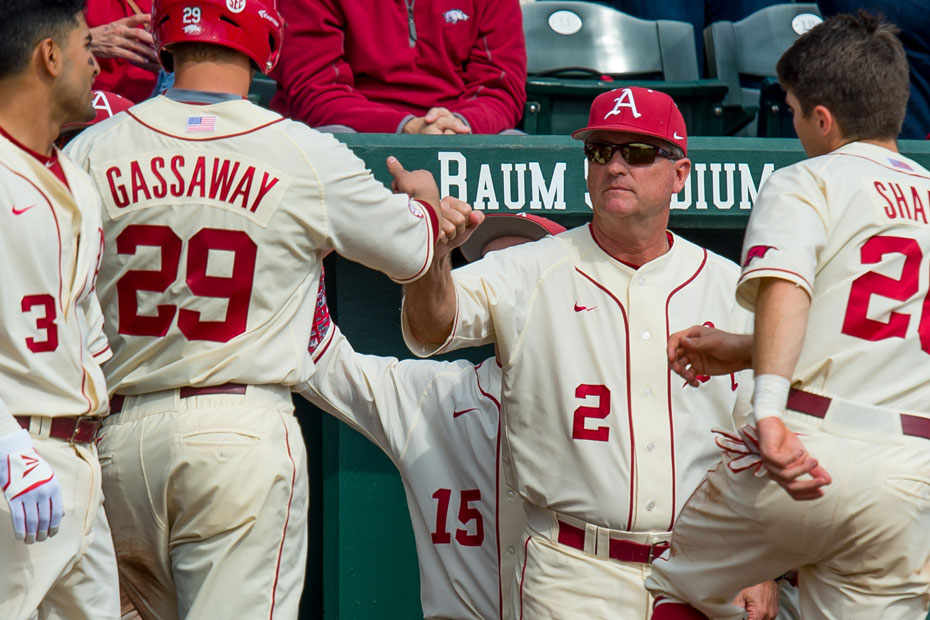 FAYETTEVILLE, Ark. – No. 12 Arkansas is back home for an 11-game homestand starting on Wednesday when it faces Louisiana Tech at Baum Stadium with first pitch slated for 3 p.m. The Razorbacks (8-0) are coming off a 3-0 weekend at the Houston Shriners College Classic after beating three-straight nationally ranked teams and look to stay perfect on the young season in Wednesday’s date with the Bulldogs (5-2).

Follow Live
Fans can catch tomorrow’s game on SEC Network+ and WatchESPN app with Alex Perlman (PXP) and Troy Eklund (Analyst) on the call as well as on the radio on the IMG Sports Network.

Leading Off
•  No. 12 Arkansas is back at Baum Stadium starting on Wednesday vs. Louisiana Tech for an 11-game homestand. The next 11 games will carry the Razorbacks into SEC opening weekend at South Carolina in March and will be the longest homestand for the Hogs this season.
• Arkansas is coming off a three-game roadtrip in Houston, Texas, where the Hogs won three games against ranked opponents (No. 24 Rice, No. 9 Houston, No. 23 Texas Tech) by a combined margin of 16 runs.
•  The Razorbacks are off to an 8-0 start in 2016, their third-best start under current head coach Dave Van Horn and fourth-best start in school history. It’s the best start since 2006, when the Hogs started 9-0 under Van Horn.
•  Freshman Weston Rogers gets the call Wednesday for his second start of his collegiate career. Last week against Mississippi Valley State, Rogers went 2.0 innings in a planned short start, giving up only one hit with no runs and striking out four. Overall this season, Rogers has two appearances as he recently got called in relief on Sunday against #23 Texas Tech, pitching 0.1 innings, while only allowing two hits.
•  Redshirt senior Michael Bernal was named SEC Co-Player of the Week on Monday by the SEC after a 8-for-20 (.400) week with nine runs scored, four home runs and 11 RBI. Of his eight hits last week, six were for extra-bases. Bernal’s four home runs currently lead the SEC. He was also named as one Collegiate Baseball’s National Player of the Wee for his great week at the plate and was named the Most Outstanding Player of the Houston Shriners College Classic.
•  The Hogs haven’t made a single error in four-straight games going into Wednesday’s matchup with Louisiana Tech. The last time Arkansas didn’t commit an error in four-straight games was last season that stretched from the last game of the Kentucky series (April 12) to the first game of the Texas A&M series (April 18), with two games against Stephen F. Austin in between.
•  Arkansas relief pitchers saw a lot of work in its 10-6 win over Texas Tech. The Hog relievers pitched 8.1 innings Sunday, giving up only one run on seven hits. In those final 8.1 innings, the Red Raiders had the bases loaded four times and never got a run home.

Arkansas will face Louisiana Tech for the first time since 2012 on Wednesday and it will be the first time the two teams have faced off at Baum Stadium since 2006. The Hogs and Bulldogs battled at Dickey-Stephens Park in North Little Rock, Ark., for a single midweek game in 2010 and 2012, with the Hogs winning both games in 10 innings. Arkansas has won the last four games against La. Tech, dating back to 2007.

Overall, the Hogs hold the series advantage at 22-3 and are a perfect 11-0 at Baum Stadium.