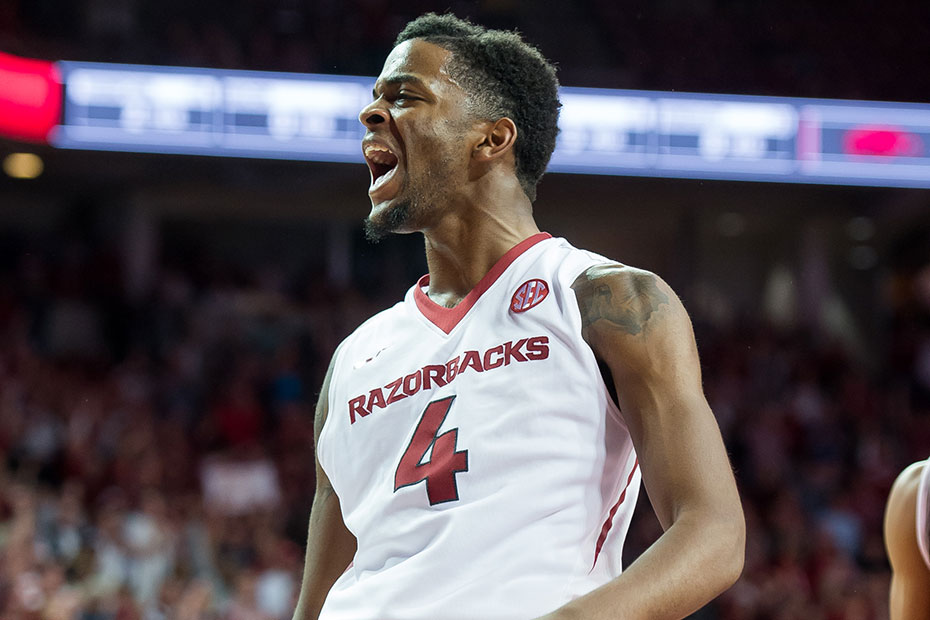 FAYETTEVILLE, Ark. – Senior guard duo Jaylen Barford and Daryl Macon led Arkansas over the Georgia Bulldogs 80-77 in a double-overtime thriller to give the Razorbacks their first road win of the season on Tuesday.

In a game that saw 17 lead changes, all in the second half and overtime, Arkansas found itself down by as many as 16 early. Going against the best scoring defense in the SEC, Arkansas struggled early to find any offense. The Hogs got behind the Bulldogs 29-13, before the Razorbacks found their groove, using defense to create offense, going on an 15-2 run to cut the Georgia lead to three. Senior forward Dustin Thomas came off the bench for Arkansas, after not playing in the last game, becoming an immediate spark on both ends of the floor, scoring six of the next eight points for the Razorbacks.

After forcing just two turnovers in the first 14-plus minutes of the game, Arkansas forced four in the last five and half minutes of the half, scoring five points off of Georgia miscues to spark its run. Making 11 of its first 22 shot attempts, Georgia missed six of its last seven in the half, as Arkansas extended its defense, creating some havoc for the Bulldogs.

A big reason for Arkansas’ comeback was senior guard Jaylen Barford, who had a game-high 10 at the break. Barford and the Razorbacks would continue their hot shooting to open the second half, as the Razorbacks hit five of their first six attempts, including Barford who hit his first three baskets to give him 18 points and Arkansas its first lead of the game at 40-39.

Opening the game going just 3-of-17 from the field, Arkansas would make 20 of its next 26 attempts, thanks in large part to the Razorbacks creating easy shots. Arkansas would build its largest lead of the game at 56-50 with 7:45 left. Georgia would go on an 11-2 run over the next five minutes to regain the lead at 61-58.

Down three with the shot clock running down, senior guard Anton Beard found Macon for a clutch three to tie the game back at 61-61.

Arkansas and Georgia would head to overtime tied at 63-63. Three of the last four meetings in Athens have went to extra time.

Tied at 66 in the first extra frame, Macon hit another big three to give Arkansas the three-point advantage. Georgia would go down the floor and respond, eventually tying the contest at 69-69, where it would go to double overtime.

In double overtime, Macon’s hot hand would continue. Down one, he would nail a deep three to give the Razorbacks the two-point lead. In the two overtimes combined, Macon scored 16 of Arkansas’ 17 points, hitting each of his last three three-point attempts.

Down one, Georgia would have one last chance.

Macon would finish with a team-high 25 points, all coming in the second half and overtime, going 7-of-14 from the field and 5-of-10 from behind the arc. Barford finished just behind Macon with 24 points, shooting 10-of-20 from the field, hitting three three’s. It marks the fourth time this season two Razorbacks scored 20 or more; all four times were by Macon and Barford, including each of the last two outings.

Game Notes
• The win give Arkansas its first road win of the season and the fourth victory away from Bud Walton Arena this year.

• It is the sixth victory in Stegeman Coliseum, including the second win in the last three trips to Athens.

• Mike Anderson is 8-3 all-time against Georgia as a head coach.

• In games decided by four points or less, Arkansas has won 11 of the last 12, including a 6-1 mark away from Bud Walton Arena.

• During the last four seasons, Arkansas has the second-most wins in the SEC with 38.