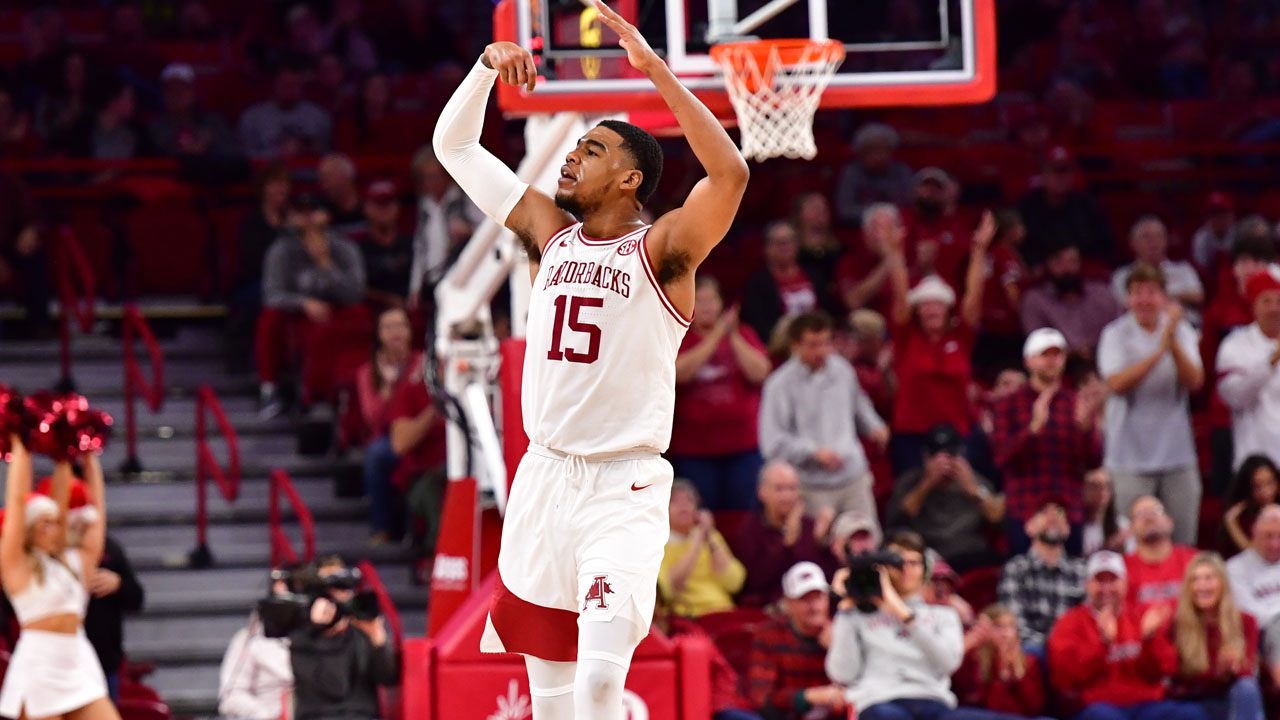 FAYETTEVILLE – Mason Jones scored a career-high 41 points – the second-best total by a Razorback in Bud Walton Arena history – and Isaiah Joe added 20 to lead Arkansas to a 98-79 victory over Tulsa Saturday afternoon. The Razorbacks improve to 9-1 while the Golden Hurricane falls to 8-3.

Jones was 12-of-18 from the field (including 5-of-11 from 3-point range) and sank 12-of-13 free throw attempts for his second 30-plus point game of the season – getting 32 in the season opener versus Rice – and the fourth of his career. The 41 points ties for the seventh-most, single-game effort in school history. The last time a Razorback scored 41 points was Joe Kleine versus Iowa State (Dec. 27, 1984). Jones’ 41 was the most by a Razorback overs since Rotnei Clarke’s school-record 51 versus Alcorn State (Nov. 13, 2009).

Jones made his first 12 free throws versus Tulsa before missing his last attempt to snap a streak of 24 consecutive makes at the charity stripe. Jones started the year by making his first 27 free throws (and 36 dating back to last season).

In the first half, Arkansas was down 4-3 early before the Razorbacks went on an 18-2 run to take a 16-point lead (21-5) with 12:34 left. The Razorbacks maintained a double-digit lead the rest of the first half, including a 3-pointer by Jones as the buzzer sounded for a 50-34 lead at the break.

Joe made four 3-pointers in scoring his 20 points and the sophomore, with 147 career treys, is just six triples shy of 10 on the Arkansas all-time list.

Arkansas will make its annual trip to North Little Rock next Saturday (Dec. 21) to face Valparaiso. Tip-off in Simmons Bank Arena is set for 7 pm.

SECOND HALF: Arkansas used a 13-2 run to pull away midway through the period to secure the win.