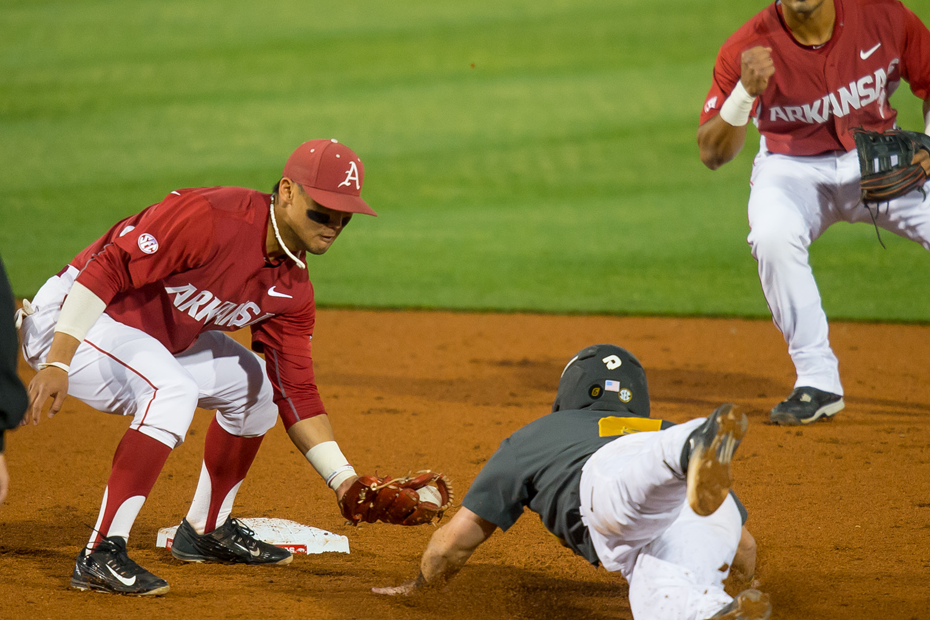 MEMPHIS, Tenn. – The No. 21 Arkansas baseball team will attempt to get back on the winning track Wednesday when it faces Memphis at AutoZone Park.

The Razorbacks, winners of two of their last five games, will try to snap a two-game losing streak and earn their 20th victory of the year before heading to Ole Miss for the fourth weekend of SEC play.

First pitch between the Razorbacks (19-9) and the Tigers (10-17) is set for 6:30 p.m. CDT at AutoZone Park, home of the St. Louis Cardinals’ Triple-A affiliate Memphis Redbirds. According to Baseball America, the park is also rated as one of the best minor league ballparks in the country.

Arkansas is coming off a 2-1 series loss to Missouri last week, its first home weekend series loss in over a year. The Hogs are hoping to bounce back by capitalizing on the continued offensive performance of Michael Bernal and Austin Catron.

Last week, Bernal hit .385 with two RBI and three runs scored. The three runs all came on Friday against Missouri when Bernal set a new season-high with three hits in the game, his eighth multi-hit game of the year.

As for Catron, he fell just a double short of the first-ever cycle by a Razorback on Saturday. The Oklahoma native finished with three RBI and two runs scored in the game, part of a 3-for-3 night. The three hits tied his season-high and was his fourth multi-hit game of the season.

Catron broke up a no-hitter in the fifth inning by hitting his second home run of the year off Missouri starting pitcher Tanner Houck. During his next at-bat, Catron delivered a two RBI triple, his first of the season.

The pitching staff has been anchored by the bullpen, specifically the arms of Doug Willey and Josh Alberius. Willey earned the win for the Hogs on Friday against the Tigers, his second of the year, after tossing three scoreless innings out of the bullpen, giving up just one hit. Willey has yet to give up an earned run in 15.2 innings of work this season. He is also the only Razorback pitcher on staff with a 0.00 ERA.

For Alberius, the redshirt junior has been a spark out of the bullpen, giving up just two earned runs through 19 innings this season. Along with his 25 strikeouts, Alberius has the second-most strikeouts on the team and is holding opponents to a .197 batting average. Alberius has also not given up an earned run in 14.1 straight innings.

Follow Live
Tuesday’s game with Memphis will not be televised, but the game will be live-streamed on GoTigersGo.com. There is a 24-hour fee of $6.95 to view the live stream during the game.

The game, as always, can be heard on the radio via the Razorback Sports Network from IMG with Phil Elson (PXP) on the airwaves. That stream can be found on your local RSN station or online on ArkansasRazorbacks.com and TuneIn.com.

The all-time series with Memphis goes back to the 1964 season when the first two games between the clubs were played in Little Rock. Since then, the Razorbacks and Tigers have played 35 times with Arkansas leading the all-time series, 21-13-1.

Arkansas has won seven of its last eight against Memphis, including a 7-3 win in Memphis last season. This will be the third game between Memphis and Arkansas in AutoZone Park.

The Razorbacks have claimed the only two games over Memphis in AutoZone Park, both by 7-3 scores. The only loss to Memphis in the last 21 years came last season at Dickey-Stephens Park in North Little Rock. Memphis took home the 5-4 victory in the first of a two-game midweek series in Arkansas and Memphis.