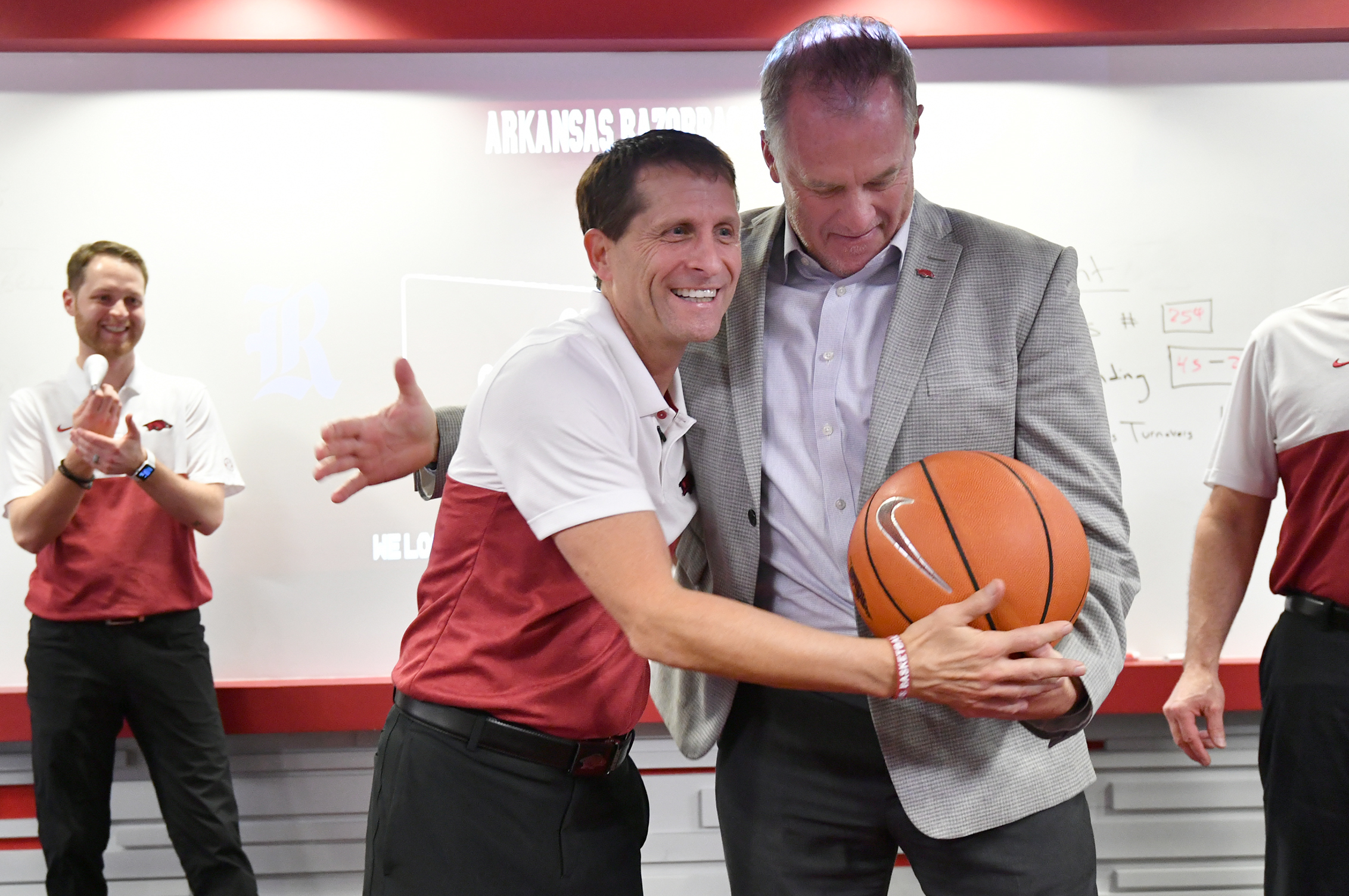 FAYETTEVILLE – The Eric Musselman era at Arkansas had a successful start as the Razorbacks handed long-time rival and former Southwest Conference foe Rice a 91-43 loss in the teams’ 2019-20 season opener at Bud Walton Arena.

Mason Jones scored a career-high 32 and Isaiah Joe added 24 to lead the Razorbacks, who shot 55.2 percent from the field while holding the Owls to just 28.6 percent shooting. Jones, who made his first four shots and was 12-of-18 for the game, additionally had seven rebounds, three assists and a career-high five steals. Adrio Bailey pulled down a career-high nine rebounds and Joe dished out a career-high seven rebounds.

Arkansas returns to action next Tuesday (Nov. 12) versus North Texas. Tipoff at Bud Walton Arena is set for 7 pm.

FIRST HALF: Arkansas 39 – Rice 19
• Mason Jones made back-to-back 3’s to start the game for the Razorbacks.
• Rice answered with an 8-0 run.
• Arkansas used 3-pointers by Mason Jones and Isaiah Joe spurred a 12-2 run and a 20-10 lead.
• A highlight reel dunk by Isaiah Joe and fastbreak dunk by Mason Jones gave Arkansas its largest lead to that point, 15 points – 31-16 – and force a Rice timeout at the 4:19 mark.
• Arkansas out-scored Rice 8-3 inside the final four minutes to give the Razorbacks a 39-19 lead at the break.
• Mason Jones led the Razorbacks with 17 first-half points and a team-best six rebounds.
• Arkansas out-rebounded Rice 22-11 in the first half and shot 48.5 percent from the field while holding the Owls to 32 percent.

GAME NOTES
• Arkansas’ starting lineup was Jimmy Whitt (G) – Isaiah Joe (G) – Desi Sills (G) – Mason Jones (G) – Adrio Bailey (F).
• Arkansas won the tip.
• Arkansas improves to 103-41 in the all-time series with Rice, including a 55-11 mark in Fayetteville and a streak of 16 consecutive wins. Rice was on Arkansas’ schedule in the Razorbacks’ first year of basketball (1923-24) but the teams have now only twice since Arkansas left the Southwest Conference. The last time the two schools met was Dec. 17, 2005 in Little Rock, a game Arkansas won 80-61.
• Arkansas opened its 97th season of basketball and is now 78-19 all-time in lid-lifters. Arkansas has won its season opener 46 of the last 49 seasons.
• Arkansas has won 45 straight home openers, including a 27-0 mark in Bud Walton Arena.
• Eric Musselman is 5-0 in both season and home openers as a collegiate head coach.
• With a win, Arkansas head coaches are 11-2 when coaching their first game as a Razorback. Musselman makes it six straight head coaches to win their debut with Arkansas, joining Mike Anderson, John Pelphrey, Stan Heath, Nolan Richardson and Eddie Sutton.
• Arkansas held Rice to 8% shooting (2-of-25) from 3-point range. It was the lowest by a Razorback opponent since Northwestern State only made 7.1 (1-of-14) from 3-point range on Dec. 29, 2012.
• The 27 turnovers forced was the most by an Arkansas opponent since Oral Roberts had 27 on Dec. 12, 2017.
• Jalen Harris scored 10 points – 3-of-4 FG including 2-of-2 3-point shooting.
• This was Mason Jones’ third, 30-point game. The junior scored 30 twice last season (Florida and Mississippi State). He has scored in double figures 21 times and has led the team in scoring 11 times.
• Sophomore Isaiah Joe has now made 117 career 3-pointers and only needs 36 more triples to enter the Arkansas career top 10. Joe reached double figures for the 29th time and made at least three, 3-pointers for the 21st time in his short career.