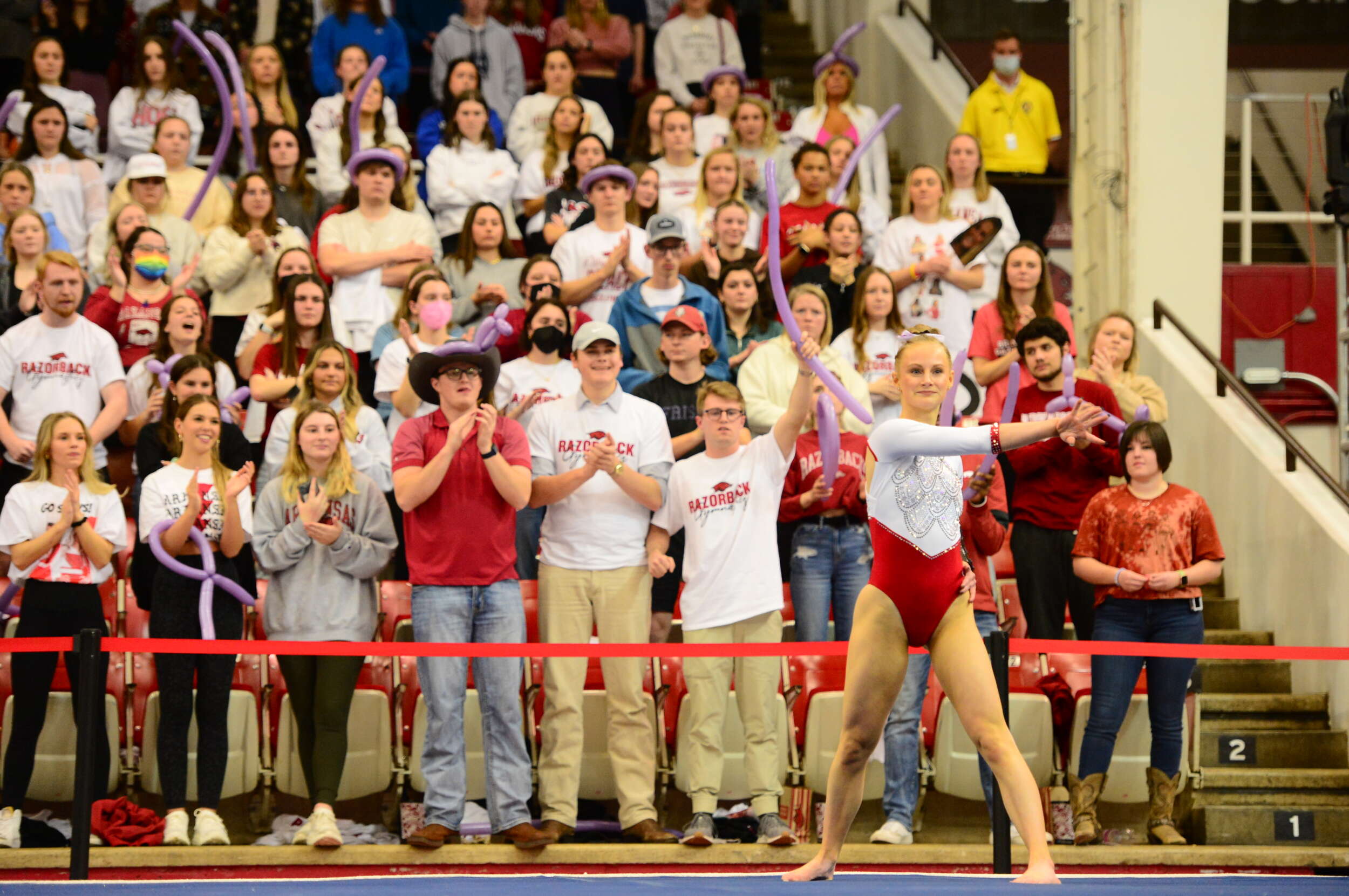 Arkansas hosted its third-annual Women’s Empowerment Night on Friday and saw its second-biggest crowd of the season, but the Gymbacks came up short to the Kentucky Wildcats by a final margin of 195.675-196.700.

Arkansas was without senior all-arounder Kennedy Hambrick on the evening, but still had plenty of bright spots on the night, especially from the team’s freshmen. Maddie Jones competed on two events and matched her career high on bars with a 9.850 and set a new one on floor with a mark of 9.900 for the event title, the first in her career as a Hog. Makenzie Sedlacek and Leah Smith also posted scores of 9.8+ on vault, and Kalyxta Gamiao made her Arkansas debut on beam and earned a 9.825.

Graduate student and All-American Maggie O’Hara bounced back in a big way after falls on bars in the last two weeks and put up a 9.925 for her second event title of the season. Senior Bailey Lovett shined again as the floor anchor and posted a 9.900 to cap the meet and share first place on the event with Jones.

“Despite some of the falls, we did have quite a few highlights. Maggie coming back on bars and changing her routine and hitting it was awesome,” head coach Jordyn Wieber said. “Vault was right where it needed to be, consistent with controlled landings … but we’ve got to stay on the equipment to put up a score, so we’re going to go back to the gym and practice and address and work on, and hopefully we’ll come back next Sunday at Mizzou a little more confident than we were tonight.”

A total of 4,139 fans were in attendance at Barnhill Arena on Friday, which included an energetic student section that helped propel the Gymbacks all night, including on floor. Arkansas posted a 49.375 on the event to extend its streak of 49+ on floor to 37 meets.

The team also recognized its alumni and celebrated women’s empowerment yet again on Friday, which included special themed warm-up leotards for Arkansas and an in-meet introduction of the Gymbacks who made the program what it is today, including first head coach and Wieber’s predecessor, Mark Cook.

Arkansas started the night on vault and heated up as the rotation wore on. Two big scores came from Smith and graduate student Sarah Shaffer midway through the lineup with a 9.825 and 9.875, respectively, a season high for Shaffer. Sedlacek followed up with a 9.800 and senior Amanda Elswick closed the rotation with a 9.825 for a total of 49.075 for the Gymbacks on the event.

The Arkansas newcomers kept the pressure on in the second rotation as Smith and Jones posted back-to-back scores of 9.825 and 9.850 to give the Hogs some momentum in the third and fourth spots. O’Hara then stepped up to anchor and redeemed herself after a tough last couple of outings. She nailed each skill and completed a textbook double layout dismount with a stick for a 9.925 that secured the bars crown for the night.

Junior Kiara Gianfagna showed poise under pressure as the beam lead-off and matched her season high of 9.850 with a stuck layout 1.5 dismount for a score of 9.850. The freshman from Honolulu, Hawaii, Kalyxta Gamiao then made her Arkansas debut with a solid routine. Her double back layout stepout series and side somi skills were executed like a veteran and she scored a 9.825. Lovett added a 9.850 in the third spot, good for Arkansas’ top score of the day.

The Gymbacks saved their best for last on floor and it all started with senior Savannah Pennese, who tied her career high of 9.875 that she set earlier in the season. Performing in front of the student section, Arkansas thrived off the energy and didn’t post a score lower than 9.850 on floor. Jones came up in the third spot and had a stellar showing that resulted in a 9.900, which ties Sedlacek as the highest floor score for a freshman this season. Lovett rounded out the competition with her crowd-pleaser of a floor routine and delivered. With excellent control on each of her passes, she scored a 9.900 to split first place and to cap Arkansas’ rotation off with a 49.375, its second-highest floor score of the season.

Arkansas heads to Columbia, Mo. on Sunday, Feb. 20 for a conference tri-meet with Missouri and Kentucky at 12 p.m. CT. The Gymbacks then return home on Friday, Feb. 25, when they host Georgia for Senior Night at 7:45 p.m.