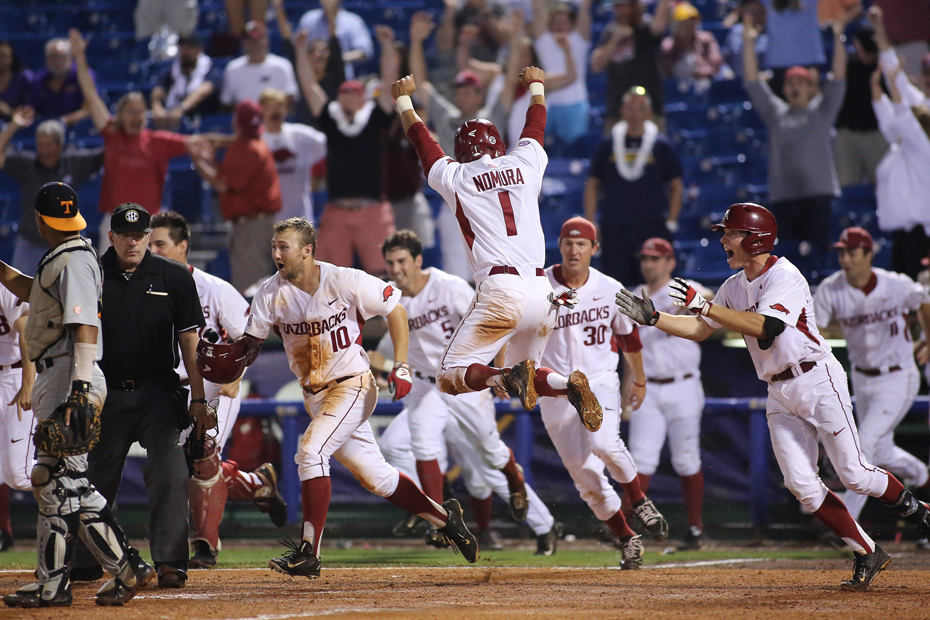 FAYETTEVILLE, Ark. – The 20th-ranked University of Arkansas baseball is set for its 28th NCAA Tournament appearance in program history this weekend, traveling to the Stillwater Regional to take on Oral Roberts in the opening game.

Leading Off
• The Razorbacks are one of just five teams nationally to advance to the NCAA Tournament each of the last 14 years. Arkansas is joined by Cal State Fullerton, Florida State, Miami (Fla.) and Rice as the only programs to accomplish the feat.

• Head coach Dave Van Horn has advanced to 17 consecutive NCAA Tournaments at Nebraska and Arkansas and has the most College World Series appearances among SEC head coaches with five.

• Arkansas enters the NCAA Tournament with the No. 35 RPI in the country. The Razorbacks have 11 wins against top 50 RPI clubs, six victories against top 25 RPI teams and enter the NCAA Regional having played the 20th toughest schedule in the country according to D1Baseball.com.

History in the Making
Andrew Benintendi is on the brink of becoming the third player in SEC history to lead the league in home runs and batting average, currently holding a two-homer lead and 16-point edge in batting average. He would join Rafael Palmeiro (Miss State in ‘84) and Jeff Abbott (UK in ‘94) as the only players in conference history to accomplish the feat.

Friday’s Probable Starter – RHP Trey Killian
Trey Killian is coming off a dominant performance in the SEC Tournament, lasting a season-long 7.2 innings and giving up just four hits and one run, while striking out five. He is tied with Dominic Taccolini for the team lead with six quality starts on the year, including three in his last four starts. Killian has worked at least 6.0 innings in seven of his 12 starts and allowed one earned run or less six times this season. Last season in the NCAA Charlottesville Regional, he worked an injury shortened 3.1 innings and gave up seven hits and two earned runs against No. 3 National Seed Virginia.

Dynamic Duo
Andrew Benintendi and Bobby Portis are one of only two baseball and men’s basketball SEC Player
of the Year combos in the same calendar year in league history. They join Florida’s Mike Zunino and
Chandler Persons in 2011 as the only other tandem to accomplish the feat.

Leading the Pack
Arkansas is the only team in the SEC to advance to each of the last 14 NCAA Regionals, and head coach Dave Van Horn is the only current head coach in the league to make five appearances in the College World Series.

Stingy Staff
The Arkansas pitching staff has held its opponents to two runs or less in 10 of the last 17 games, posting an ERA of 2.97 with 111 strikeouts and a 12-5 record.

Road Warriors
Arkansas has gone to work on the road since April 18, winning 10 of its last 13 games away from Baum Stadium. The Razorbacks have been on the road for each of their last four NCAA Regionals, posting a record of 9-6, including a perfect 3-0 record during the 2012 Houston Regional.

Double-Digit Hitting Streak
Michael Bernal is riding a career-long 10-game hitting streak since May 8, recording 13 hits and scoring seven runs along the way. He has raised his average 36 points during the stretch and has a walk-off hit against Tennessee in the opening round of the SEC Tournament.

Flyin’ Hawaiian is Soaring
Rick Nomura has five multi-hit games over the last nine contests, including a three-hit performance against No. 7 Florida with three runs scored in the SEC Tournament. The junior has 14 multi-hit games this season to rank sixth on the team.

Cruising as of Late
After posting a 13-4 record in the month of April, Arkansas has backed that up with an 8-4 mark to start the month of May to reach 30 or more wins in a season for the 38th time in the last 40 years.