As fans file into Barnhill Arena this Friday night, they will see more than lights out gymnastics, more than an amazing floor performance, more than a packed-out cheering Razorback student section. They will walk into a celebration of women who have empowered others to be strong, confident and resilient. Women who have ignited change. Women who have paved the way.

Senior Jessica Yamzon appreciates the opportunity to shine a light on women’s empowerment. “We’re excited to compete with a greater purpose in mind. It’s bigger than gymnastics. We get to have this platform because of the women who came before us.”

It’s fitting that the theme for this new era of Razorback gymnastics is RISE. Ready. Ignite. Sizzle. Explode. Under the leadership of first year head coach Jordyn Wieber, the enthusiasm for this Gymback team is palpable around campus.

“We’re excited to compete with a greater purpose in mind. It’s bigger than gymnastics. We get to have this platform because of the women who came before us.”

The excitement of having an Olympic Gold Medalist and World Champion turned Razorback cannot be denied. But on any given day, you can find Jordyn on campus quietly and consistently going about the business of building the buzz for the Gymbacks. She is passing out stickers in the student union, delivering cookies to sororities, prospecting possible gym fans, doing backflips on the football sidelines, working to “fill the Barn” and give her student-athletes that competitive home meet edge.

If you call her Coach Wieber, she’ll say, “It’s just Jordyn.” Fitting for someone who doesn’t love the spotlight. She is most at home in the gym… teaching, training and dissecting every detail of each routine. She loves the sport and is passionate about coaching this next generation of athletes.

But you can’t ignore the credentials. Jordyn Wieber has paved her own way, collecting a slew of titles and medals along the journey. She remains one of the most accomplished gymnasts in U.S. history… Olympic Gold Medalist, World Champion, U.S. National Champion, American Cup winner and the list of accolades goes on and on.

Jordyn’s love for the sport began in her home state of Michigan at just four years old. The little girl who couldn’t wait to get to practice quickly became a driven athlete with undeniable talent and big dreams.

The world watched as Jordyn and The Fierce Five took on those Olympic dreams at the 2012 London Games. Jordyn was the reigning World Champion and dubbed the favorite for the all-around title. But two-tenths of a point would keep her sidelined. Because of the two gymnast per country rule, she was left devastated in front of millions. But as her own individual dream ended, she showed the resilience of a champion. And with less than 36 hours to process, she got back up, competed with her teammates and brought home a gold medal for Team USA. She paved the way for anyone who falls short, for anyone with self-doubt, for anyone who has to come back from defeat.

Jordyn was teaching a whole new generation of athletes even then. Sophomore Gymback Amanda Elswick remembers watching that Olympics. “I always admired the way she handled herself in competition. She could’ve easily shut down but she didn’t let that disappointment stop her from helping out her team.” Having just come back from an injury, Amanda says Jordyn encouraged her to think about team before self. “She was a team manager for three years and watched everyone else compete. She knows how I’m feeling, and I realized how valuable that was. She encouraged me to come in with an open mind and figure out how to impact each teammate.”

It was that appreciation for team that led Jordyn through the next chapter of an already storied career. Because of her professional status, she was unable to compete as a collegiate student-athlete. So while she continued to train for the next Olympics, she joined UCLA gymnastics as a team manager and later transitioned into a volunteer coaching role. Former UCLA head coach Valorie Kondos Field describes Jordyn’s servant heart. “She was chalking bars, moving mats, doing laundry, setting up gear. Little girls in the stands saw an Olympic Gold Medalist showing up for her team in an incredible way. She’s the perfect combination of confidence at the highest level with no ego.”

But it was hard to balance training, school and team manager duties. In 2015, Jordyn retired from competitive gymnastics and chose to focus on her team. “I realized how much more you could accomplish with other people,” she said.

It was that strength of character that carried Jordyn through January 18, 2018, when she read her victim impact statement in a Michigan courtroom. “I thought that training for the Olympics would be the hardest thing that I would ever have to do, but in fact, the hardest thing I would ever have to do is process that I am a victim of Larry Nassar.” At that point, Jordyn decided to move forward with a new purpose as an advocate for other sexual abuse survivors. “I am a victim, but I will not live as one,” she said.

That resilience and strength is noticed by her current crop of student athletes. Yamzon said, “She showed us all that our voices matter. She’s been through so much, so she’s able to pave the way and guide us through.” 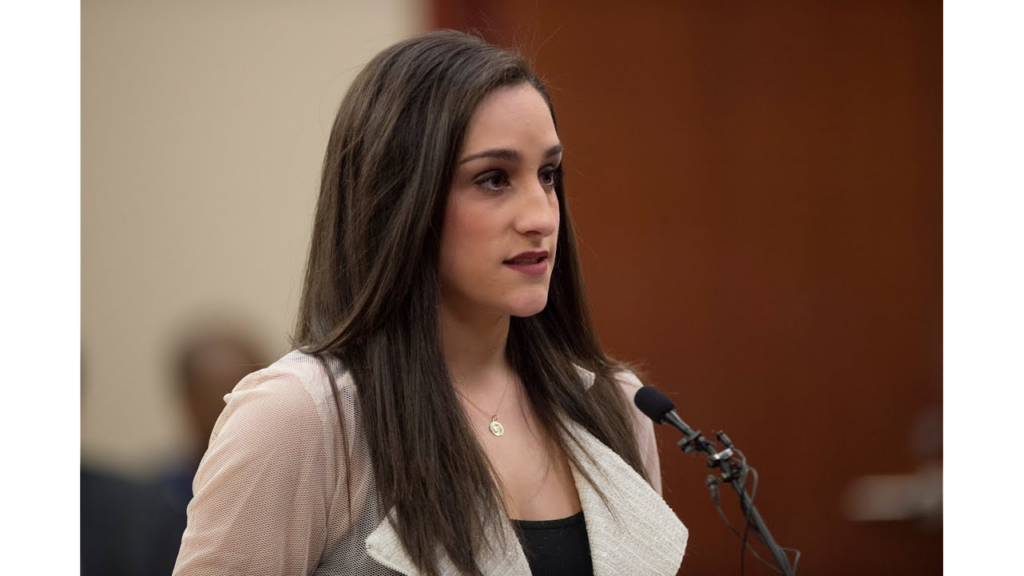 As the head coach of this Arkansas Razorback Gymnastics team, Jordyn is guiding these student-athletes to be strong and resilient, above and beyond the sport. “True champions are built when you coach the person as a whole, not just the athlete. The way they show up, the way they’re there for their teammates, the way they cheer from the sidelines.”

Label her whatever you want… Olympic Gold Medalist. Survivor. Coach Wieber. Just Jordyn… she said it best, “We are all here because someone, somewhere paved the way for us to be here. Something ignited a spark. Someone ignited a passion in us. When we come together and rise up for a greater purpose, we pave the way for those to come.” 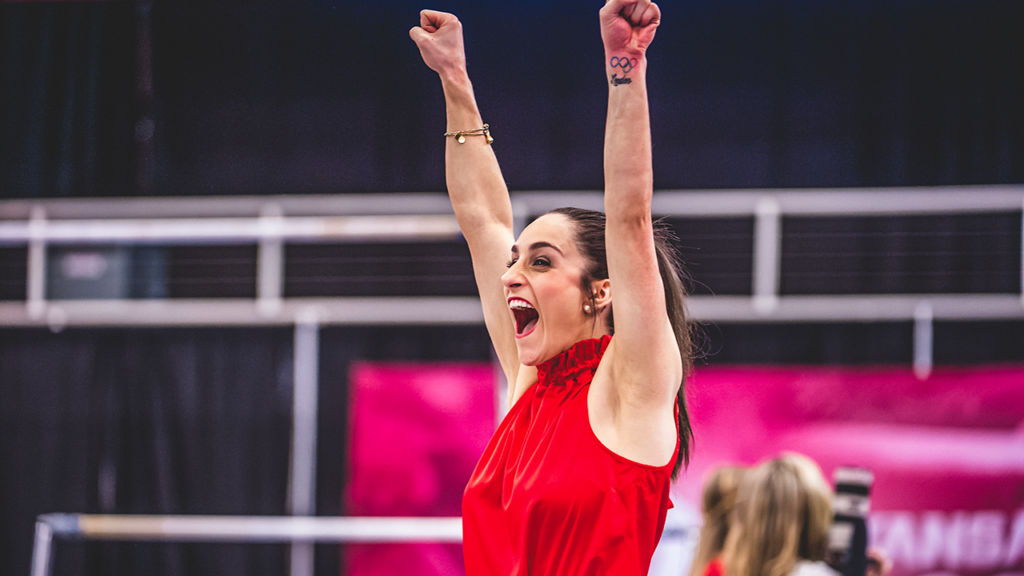