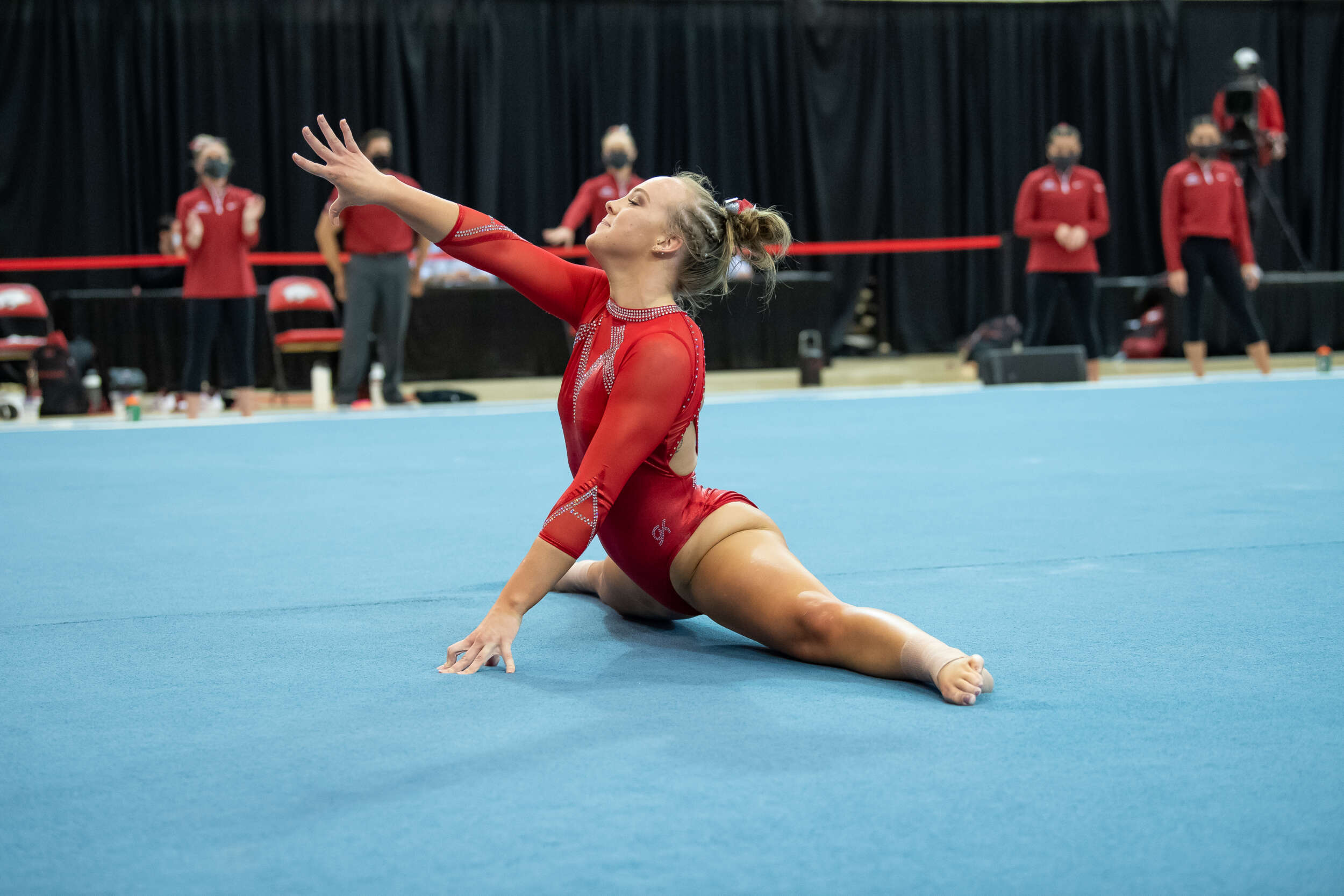 ATHENS, Ga. – It was a total team effort Friday night for the University of Arkansas gymnastics team, taking down the No. 10 Georgia Bulldogs inside Stegeman Coliseum, 196.875-195.950, for the Razorbacks’ first-ever win in Athens.

The first rotation yielded six hit routines for Arkansas but only junior Kennedy Hambrick and graduate Maggie O’Hara scored a 9.800 or higher. Hambrick’s blind-change jaeger with immediate overshoot earned her a 9.850 while O’Hara’s routine, complete with a gorgeous bail handstand, was scored a 9.825 in the anchor spot.

Headed into the second rotation closely trailing Georgia, 49.150-48.950, the Razorback vault squad came out of the gates firing with 9.875 from both Hambrick and Sarah Shaffer. Shaffer stuck her Yurchenko layout half, setting up Hambrick for success with her Yurchenko 1.5. Mid-way through the meet, the Gymbacks flipped the score in their favor for a 98.125-98.00 lead after two rotations.

Arkansas was prepared to shine on the floor, heading into the night ranked third nationally in the event. In the leadoff spot, junior transfer Abby Johnston tied her career-high 9.875 after an all-around impressive performance and memorable double-pike first pass. Sophomore Maddie Hickey followed with a 9.850, hitting a new career-high as well. The scores continued to trend upwards for the Gymbacks as Shaffer’s 1.5 front layout and double-pike last pass won her the event title behind an extraordinary season-best 9.925 routine. Arkansas added more depth to the score sheet as Bailey Lovett’s amplitude and height on each of her passes brought her routine to life. She tied her season-best of 9.900 in the event and helped Arkansas round out its second-best floor rotation of the season.

Lovett transferred her energy to the final rotation and closed out a clean routine with a stuck side ariel back-full dismount to earn a career-high 9.925 on the beam, kick-starting an overall great rotation for the Gymbacks. For the second time in as many road meets, Hambrick’s beam anchor performance brought the house down. Her back handspring layout and cartwheel gainer-full dismount topped off a 9.925 routine and finished the night in beautifully dramatic fashion.

The Gymbacks will return to Fayetteville and practice during their bye week before they compete on the road at Kentucky on Feb. 12 for their third of four road meets this season.