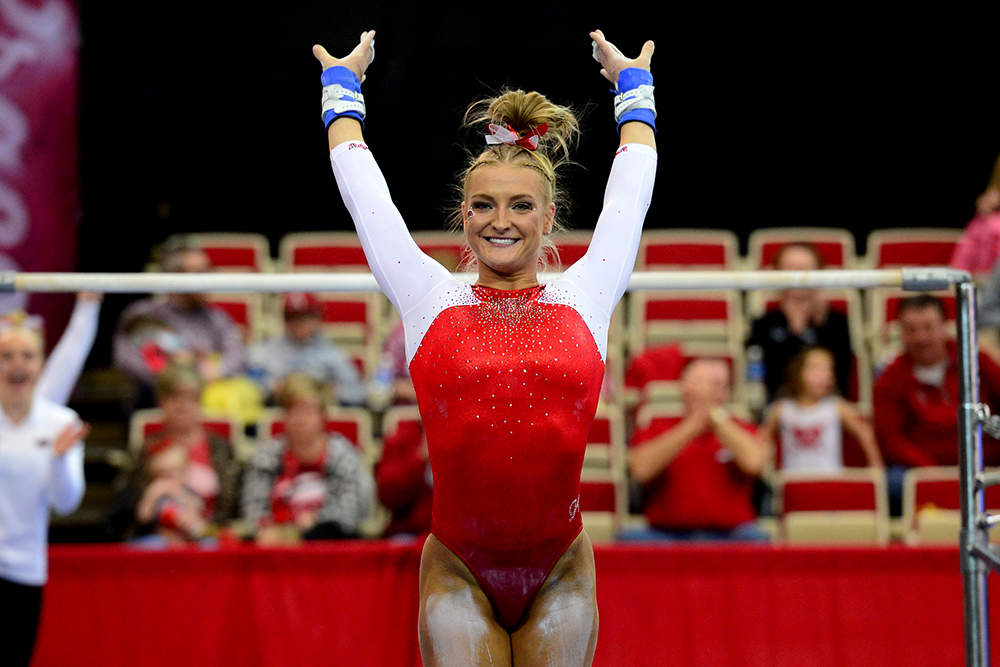 GAINESVILLE, Fla. – Arkansas recorded its highest road score of the season at No. 5 Florida as the Razorbacks fell to the Gators 197.725-196.875 in Gainesville.

First Rotation: Florida Vault: 49.525, Arkansas Bars: 49.375
Arkansas posted its highest score on bars in a road dual meet as the Razorbacks got to a fast start and five Razorbacks recorded scores of 9.850 or higher. Freshman Sarah Shaffer and senior Braie Speed led the Razorback and recorded 9.900’s each. Freshman Sydney Laird set a new career high with a 9.875 in the three spot. Senior Amanda Wellick and sophomore Jessica Yamzon each posted a 9.850 as the Razorbacks trailed by two tenths heading to the second rotation.

Second Rotation: Florida Bars: 49.525, Arkansas Vault: 49.125
Arkansas posted its second highest vault score of the season as the Razorbacks finished strong after a slow start in the second rotation, led by Speed who recorded a new career high and tallied a 9.925. Shaffer and Wellick each posted a 9.875 in the third and fourth spot to round out Arkansas’ leaders on the event.

Third Rotation: Florida Beam: 49.575, Arkansas Floor: 49.225
Shaffer posted her second score over 9.900 of the night with a 9.925 as she set a new career high on the event. Sophomore Michaela Burton tallied the Razorbacks’ second highest score with a 9.875, tying her highest score of the season on the floor. Yamzon and freshman Sophia Carter each posted 9.825’s to round out Arkansas’ best. Wellick was inserted into the lineup and had her first all-around performance of the season, tallying a 39.200.

Fourth Rotation: Arkansas Beam: 49.150, Florida Floor: 49.100
Yamzon got Arkansas off to another fast start on the beam, posting a 9.850, the first of four scores over 9.825 for the Razorbacks, leading Arkansas to its only team event title of the night. Anchor Michaela Burton posted the Razorbacks highest score with a 9.900 to give the Razorbacks a 49.150 on the event and a final score of 196.875.

Up Next
The Razorbacks return home to Barnhill Arena for the first time in three weeks as Arkansas hosts the Arizona Wildcats. The Meet is scheduled to begin at 7 p.m., with doors opening at 5:30.