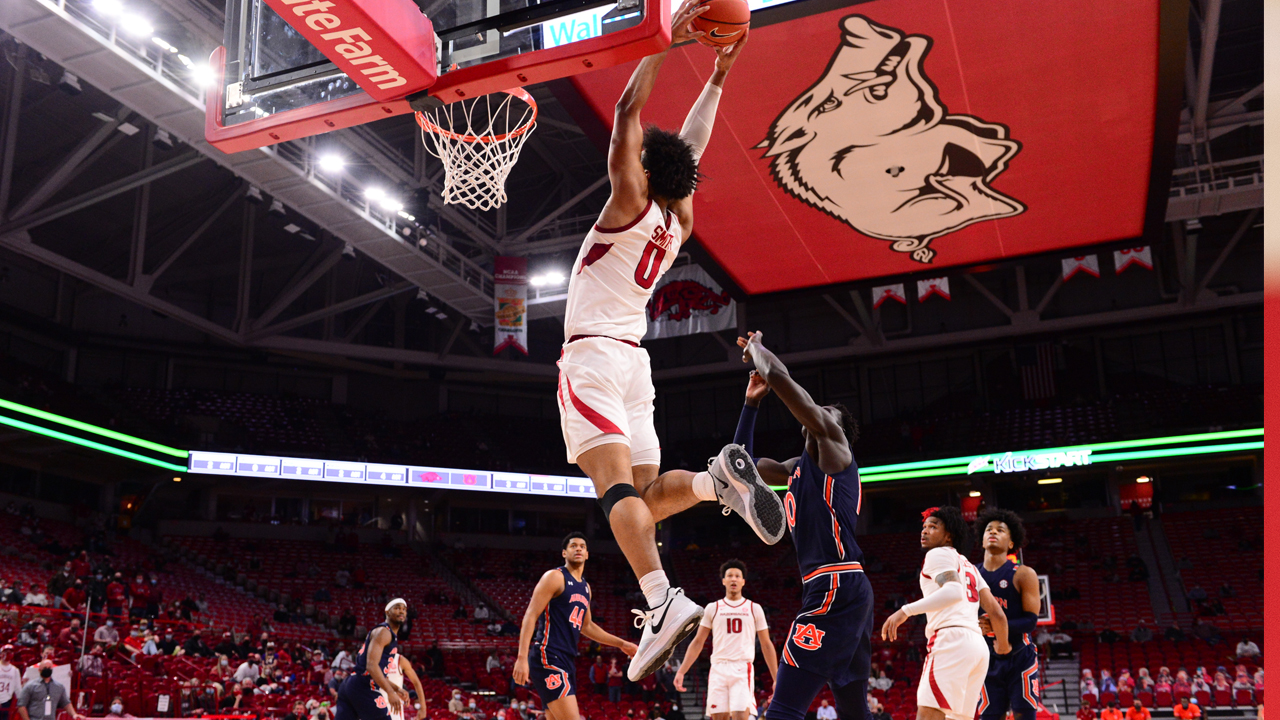 FAYETTEVILLE – For the third straight game, Arkansas got down big in the first half. However, the Razorbacks showed great resolve in the second half to pull out a 75-73 victory over Auburn Wednesday night at Bud Walton Arena.

Desi Sills, who scored a career-high 23 in the first meeting with Auburn this year, pumped in 22 Wednesday, including 14 in the second half. Jalen Tate scored 14 while Jaylin Williams and Justin Smith each scored 10.

Arkansas was down 19 (37-18) with just over four minutes left in the first half. Vance Jackson Jr., and Tate made a pair of 3-pointers and the Hogs trimmed their deficit to 12 at the break.

Smith opened the second half with a quick basket and Arkansas took its first lead of the game, 47-45 at 13:26, thanks to an 18-4 run to start the period. Williams punctuated the lead with a dunk on an offensive rebound.

Javon Franklin sank a pair of 3-pointers to give Auburn brief leads, the last being 53-51 with 11:49 left. Davonte Davis answered back-to-back baskets and Arkansas did not trail the rest of the game.

However, Auburn made it interesting down the stretch.

Arkansas took its largest lead, eight points (74-66), with 2:40 left. The Tigers made three straight trips to the free throw line but were just 3-of-6 to trail by five with 1:52 left. After an Arkansas turnover, Sharife Cooper drove to the basket for a layup to cut the Auburn deficit to three (74-71) with 1:41 left.

The Hogs came up empty on the ensuing possession and Cooper made another layup to make it a one-point game (74-73) with 1:03 remaining.

Arkansas had two shot attempts before turning the ball over and Auburn took over with 26 seconds left. Cooper worked the clock down to five seconds but was met by a wall of Razorbacks at the rim. Moses Moody pulled down the rebound and was fouled with two seconds left. He made 1-of-2 at the line to make the score 75-73 and Auburn’s final shot missed.

Cooper finished with a game-high 25 points and JT Thor added 12.

Up Next, Arkansas is scheduled to return to the road to face Vanderbilt on Saturday (Jan. 23). Tipoff is set for Noon and the game will be televised on SEC Network.