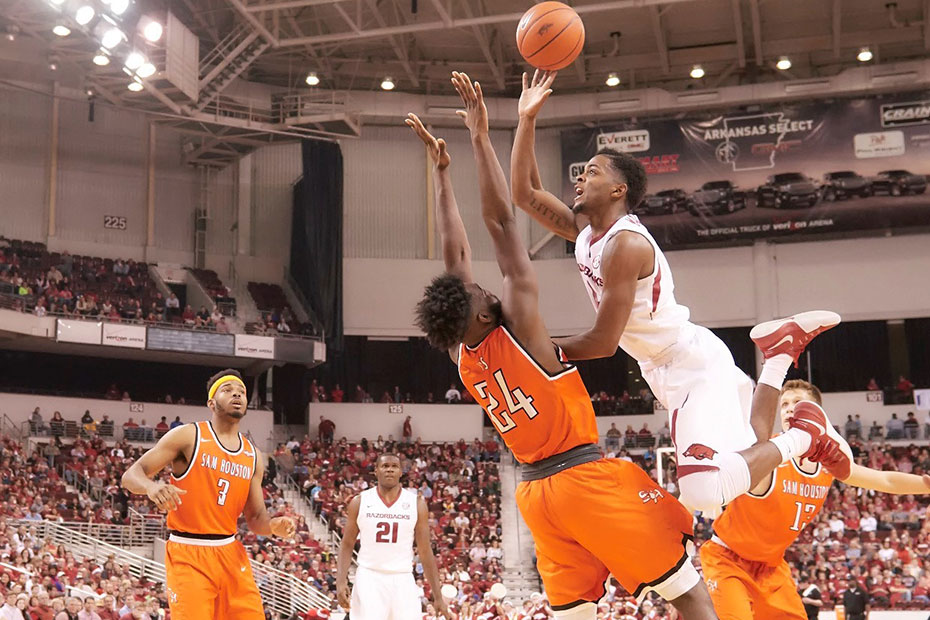 The Razorbacks (11-1) captured their eighth consecutive victory with the 34-point blowout, marking the longest winning streak in the Mike Anderson era as Arkansas eclipsed the 90-point plateau for the fifth time this season.

The Razorbacks came out aggressive on offense in the first period. Arkansas went to the free throw line 20 times in the opening half, the most all season in the first half. Sam Houston State earned a trip to the charity stripe only three times, tying for a season-low in a half by Razorback opponents.

To lead the charge, senior Moses Kingsley scored 13 of his season-high 17 points in the first half. Kingsley also brought down seven rebounds to go along with three blocks in the contest. The big man has seven games of three-plus blocks on the season.

Daryl Macon scored in double figures for the fifth straight game. After having eight points in the first half, the Little Rock native put up seven of Arkansas’ first nine points in the second half to stretch the Razorback lead to 17 with 16:59 left in the second period. Macon finished with 17 points.

Arkansas used a 23-6 run to give extend the Razorback lead to as many as 37 points with 2:49 remaining, before settling for a 34-point victory.

Junior guard Anton Beard finished with a season-high 16 points to go along with three rebounds. The six-foot junior has brought down three or more rebounds in seven of the last 10 games.

UP NEXT
Arkansas will return to Fayetteville on Thursday, Dec. 29 to open Southeastern Conference play against the Florida Gators at 8 p.m. The game will be televised on SEC Network.