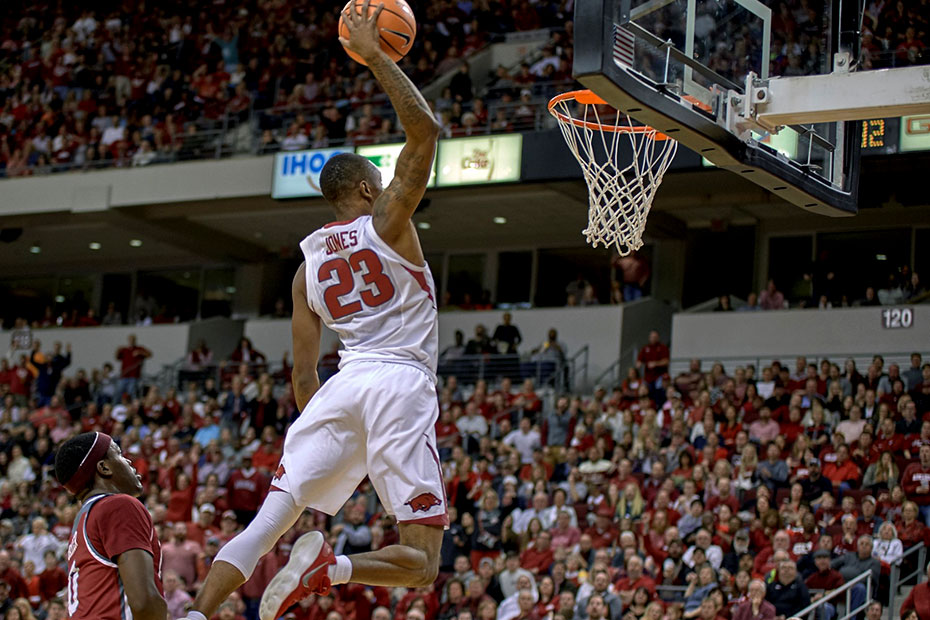 It is Arkansas’ fifth win by 20 or more points this season.

Troy came out shooting, hitting its first three shots to take an early 8-2 lead. The Razorback defense rose to the occasion, forcing six straight misses by the Trojans, to go on a 15-3 run, including 13 straight.

Macon scored eight straight part of the run that gave Arkansas the lead, with back-to-back three-point baskets and a lay-up in transition off a steal. He led the team at half with 15 points, including four off of two steals. North Little Rock native Anton Beard went 4-of-5 from the floor in the first half, scoring nine points.

After grabbing the lead, Arkansas would start to take control of the game, using runs of 13, 13 and eight. The Razorbacks took a 20-point lead into the break, up 45-25. The Razorbacks shot 62.1 percent from the field in the first half, going 19-of-28, to give Arkansas their largest lead at halftime ever in Verizon Arena.

After trailing for four minutes, 10 seconds at the beginning of the game, Arkansas went on to lead for the final 35 minutes, 38 seconds. It is the eighth time this season Arkansas led by more than 30 minutes, seventh time leading by more than 35 minutes.

A key to victory for the Razorbacks was sharing the ball well. Arkansas had 19 assists to just six turnovers. Over the last three games, Arkansas has a combined 64 assists to 20 turnovers, good for a 3.2 assist-to-turnover ratio.

Macon finished the game with a team-high 25 points to go with three rebounds and five assists. It is Macon’s eighth game this season scoring in double figures, third scoring 20 or more. Macon’s 25 points is the second most by a Razorback in Verizon Arena, after Mike Washington had 34 against North Texas in 2009.

The Razorback dominated the paint, outscoring the Trojans 50-16 down low. 14 of those points came on seven dunks, the second-most in a game this season by Arkansas.

The Razorbacks return to Fayetteville on Tuesday to host Oral Roberts at 7 p.m. in Bud Walton Arena. The game will be streamed on SEC Network Plus.

Game Notes
• Arkansas’ win improves the Razorbacks to 5-2 in North Little Rock under head coach Mike Anderson, including wins in five of the last six trips.

• For the first time in 24 years, Arkansas has scored 90+ points in seven of its first 10 games. That span dates back to the 1994 National Championship season.

• Arkansas has 24 runs of seven points or more in 10 games this season, compared to just 10 by opponents.

• The Razorbacks have multiple runs of seven points or more in eight of 10 games.