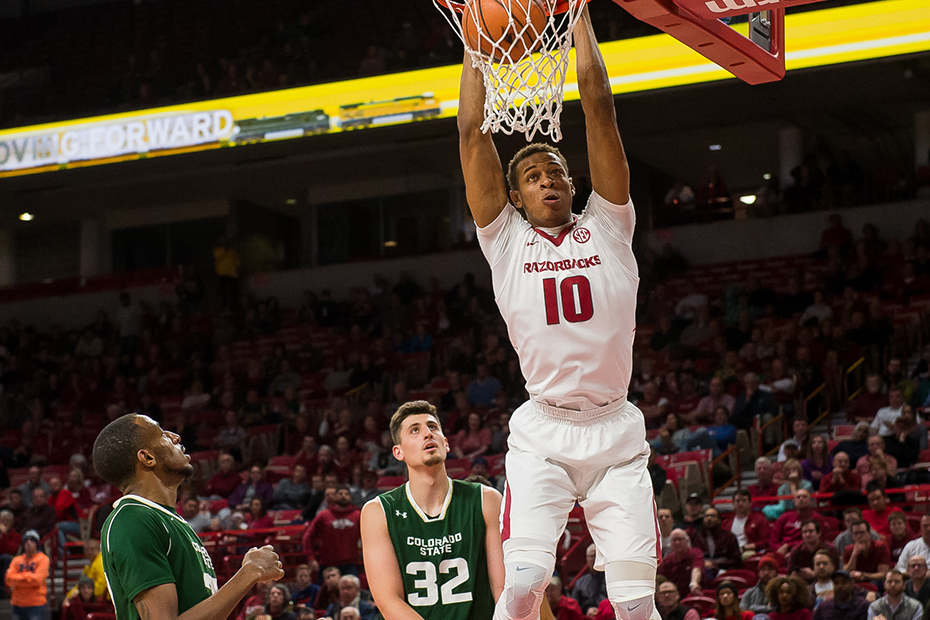 FAYETTEVILLE, Ark. – Despite its slow start, the Arkansas men’s basketball team improved to 6-2 Tuesday night, as the Razorbacks defeated the Colorado State Rams 92-66.

Arkansas got off to a slow start for the second consecutive game, spotting the Rams 10 points before the Razorbacks could figure out anything on the offensive end. Arkansas would take care of the ball, turning it over zero times in the first period, to settle in and take control of the game. Freshman Daniel Gafford would sub in and make an immediate impact. The big man recorded a block on the Razorbacks proceeding defensive possession, then scored seven of Arkansas’ next 10 points, including five straight, to assist in a 19-0 Razorback run.

During the run that lasted over six minutes, Gafford went 3-of-4 from the field with eight points, two rebounds and a block that sparked it all.

Arkansas’ entire bench would pitch in on the action to help spark the large run. Sophomore C.J. Jones and freshman Darious Hall both had six points during each of their first substitutions, going a combined 5-for-5 from the floor. At one point in the first half, the trio was outscoring Colorado State’s bench 20-0. Arkansas’ bench would finish the game outscoring the Rams’ 47-17.

After being down by as many as 11 early, the Razorbacks would take an 18-point lead into the break, after closing the half on a 10-0 run.

Arkansas continued its run, scoring five straight to open the second half, to complete at 15-0 run. The Razorbacks had four runs of seven points or more in the game, bringing the season total to 19.

The Razorbacks would control the second half and ride it out to a 26-point win, their fourth win this season of 25 points or more. Arkansas led by as many as 29 in the game.

After scoring in double digits just twice as a freshman, Jones has scored 10-plus points four straight games, tying his career high with a 19-point performance Tuesday. It is his fifth double-digit effort this season. Jones has broke or tied his career high in scoring in three of the last four games.

Senior guard Jaylen Barford finished with 19 points, as well. Barford also pulled down five rebounds for his fifth game this season with at least four boards.

Gafford would finish with 14, while senior guard Daryl Macon would have a game-high seven assists to go along with nine points.

Arkansas returns to Bud Walton Arena on Saturday, as the Razorbacks play host to the No. 14 Minnesota Golden Gophers as 5:45 p.m. on the SEC Network.

Game Notes
• Arkansas turned the ball over zero times in the first half, marking the first time since January 24, 2015 at Missouri that the Razorbacks did not turn the ball over in a half. Arkansas finished with three turnovers in a 61-60 win over the Tigers.

• Arkansas dished out 22 assists Tuesday night, marking the 44th time in the last seven years Arkansas has eclipsed the 20-assist mark. Arkansas is 41-3 during that span, including 29-1 in non-conference play.