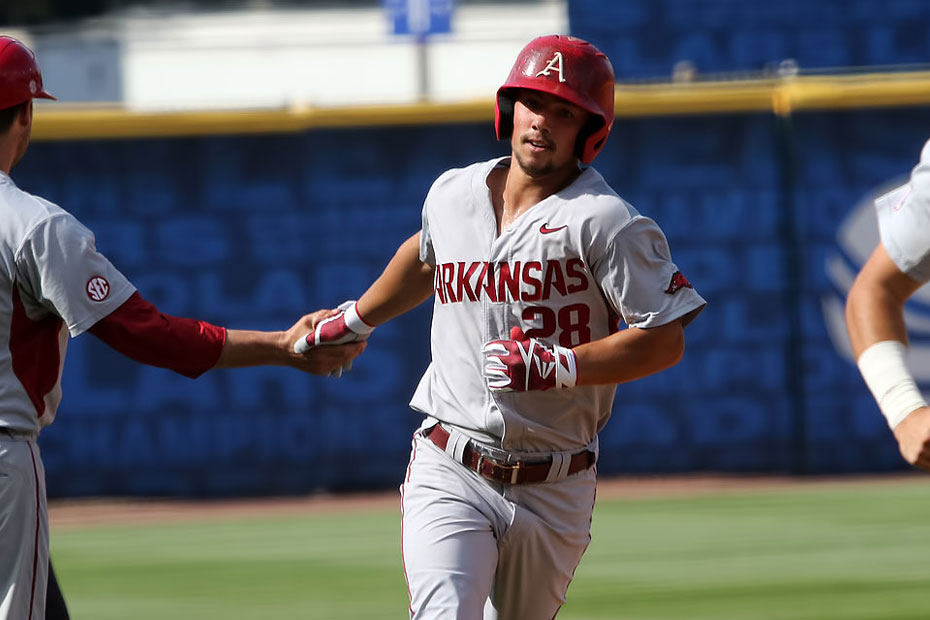 FAYETTEVILLE, Ark. – The 11th-ranked Arkansas baseball team is set for its 29th NCAA Tournament appearance in program history this weekend, as it will take on Oral Roberts in its first game of the Fayetteville Regional at 7 p.m. on ESPN3.

Friday’s Probable Starter – RHP Trevor Stephan
With it being just his first year with the Razorbacks and third year, overall, as a pitcher, junior Trevor Stephan will get the call Friday night to make his 16th start of the year. Stephan has been one of Arkansas’ strongest arms as of late, as he has gone six or more innings in each of his last five starts and has struck out 10 or more batters in three of those outings. Stephan has racked up 108 strikeouts this year to lead the Arkansas club, which is eighth-most by a Razorback in a single-season in program history.

We’re Hosting!
As the Razorbacks make their 29th NCAA Tournament appearance overall and 14th in the last 15 years, this weekend will mark the sixth time that Fayetteville has been selected as a regional host and first time since 2010. Last time Arkansas hosted a regional, the Hogs went 3-1 with wins over Washington State and Grambling State to reach the Super Regional.

All-SEC Accolades
Grant Koch, Jax Biggers, and Dominic Fletcher each were named all-conference players Monday by the Southeastern Conference office. Koch leads the trio as a first team All-SEC catcher, while Biggers was named as a second team All-SEC shortstop. Fletcher is part of the SEC All-Freshman Team in the outfield. Koch is only the second Razorback catcher to be named an All-SEC player in program history and first since Jake Wise in 2014. As for Biggers, he’s the seventh infielder to make the first or second team with Dave Van Horn as the head coach and first primary shortstop since Scott Hode made the second team in 2004. Fletcher is the third player to make the all-freshman team in the last four seasons.

Fletcher Breaks Out
Freshman Dominic Fletcher hasn’t needed long to get used to the college game. The California native has started in centerfield for 51 of Arkansas’ 59 games and is hitting .298 with 12 home runs. The long ball total is the most by a Razorback freshman since Zack Cox had 13 during the 2009 season, setting the Arkansas freshman record. Fletcher has six home runs in his last 13 games and is hitting .412 during that span with 12 RBIs and only four strikeouts.

K-zorbacks
With the introduction of pitching coach Wes Johnson, the Hog pitchers haven’t been short on strikeouts. Now at 557 strikeouts this year, it’s not only second in the SEC, but is fourth in the nation. That total is also good for second-most in a single season in program history.

Streaky Cole
Eric Cole has been swinging the hot bat since the end of the regular season. Cole is currently on an 11-game hit streak heading into the NCAA Fayetteville Regional. During the streak, he has two home runs, 16 hits, and seven RBIs. Both of his home runs came in the SEC Tournament, giving him five home runs for the season. Cole even provided both RBIs in Arkansas’ 4-2 tournament title game loss to LSU.

Hog Pitching Staff Combines For First SEC Tournament No-Hitter
In its first elimination game of this year’s SEC Tournament, Arkansas did more than just stay alive for the next day, the pitching staff no-hit the Auburn Tigers over seven innings in a 12-0 run-rule win, to throw the first no-hitter in SEC Tournament history. Dominic Taccolini, Matt Cronin, and Josh Alberius combined to throw the 13th no-hitter in Arkansas history and first since 2006.