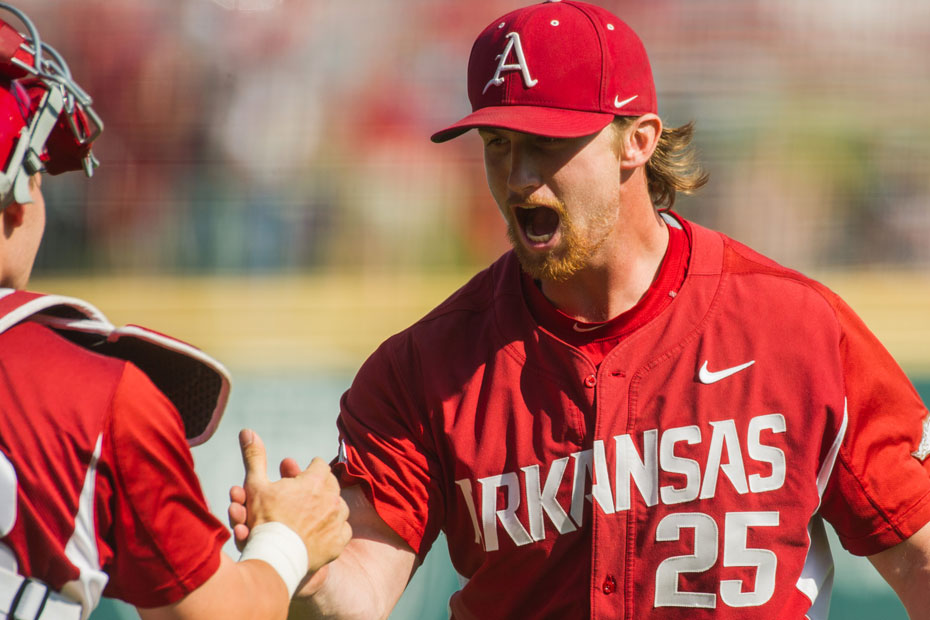 FAYETTEVILLE, Ark. – Arkansas made easy work of Mississippi State on Sunday at Baum Stadium earning a 6-1 victory in front of 7,828 fans and the three-game sweep to open Southeastern Conference play.

The win marks the first three-game sweep for Arkansas in a SEC opening series since 2012 when the Razorback took three-straight from Alabama in Fayetteville. It’s also the first three-game conference sweep since last year when Arkansas won all three games against Auburn (March 25-27, 2016).

It was also Arkansas’ first sweep of Mississippi State since 2010 when the Hogs won all three games in Starkville, Miss., by a combined score of 29-11.

The Hogs got production up and down their lineup all game forcing the Bulldogs to their bullpen in the third inning. Carson Shaddy, Jordan McFarland, and Jax Biggers all recorded two-hit games. Shaddy unloaded his fifth home run of the year in the seventh inning adding to an already big Arkansas lead. Shaddy now joins Grant Koch and Dominic Fletcher as the three Razorbacks with five or more home runs this year.

Redshirt senior Josh Alberius had his best start of the year, going four strong innings and not allowing a run to earn his first victory in four tries. Mississippi State did get five hits off the righty, but Alberius only walked one and struck out three, while only three runners reached second base.

Senior Dominic Taccolini closed out the game, garnering the four-inning save after giving up just one hit, a solo home run to Brent Rooker in the sixth. Other than the long ball, Taccolini was spotless, walking just a single batter and striking out a game-high five Bulldogs.

Moments That Mattered
Unlike its previous two games in the series, Arkansas scored early, putting up three runs on three hits in the third inning. Instead of using the home run ball to take the lead, the Razorbacks strung together three singles from Eric Cole, Jax Biggers, and Shaddy.

Mississippi State went to the bullpen for the first time after the Biggers single and a walk to Jake Arledge loaded the bases. Even with the change, Arkansas still got a run home on a sacrifice fly from Chad Spanberger. Two batters later, Biggers scored on a passed ball, followed by the RBI single from Shaddy.

Spanberger’s bat has warmed up in the last week. Even without recording a hit in Sunday’s contest, the junior has four hits and six RBIs in his last four games, including home runs against Alcorn State and yesterday against Mississippi State.

The Razorbacks went on to add single runs in the fourth, sixth, and seventh innings, while the Bulldogs never had an answer. When Taccolini came in to pitch in the sixth inning, the Rooker homer in the sixth and his walk in the ninth were the only Bulldog baserunners for the rest of the game. Including Sunday’s appearance, Taccolini has struck out four or more batters when he has pitched three or more innings.

Razorback Quotables
“We thought if we get it to a certain point we could bring Dominic (Taccolini) in and let him go. It was really good to see that. It was good for the team but good for Dominic, personally. Just happy for him and happy for the team and just happy with the way we played on a Sunday. We haven’t played very good the past two Sundays. We challenged them on that last night. Come out and give us your best game on Sunday, and today we just played a lot of baseball. We didn’t play homerun derby. We got some big two-out hits and it was just a really well-played game by everybody.” – Head coach Dave Van Horn on Dominic Taccolini and the performance of the team

“It feels great. I would be lying to you if I said I wasn’t excited about it. It’s three of thirty (games). That’s what we talk about. You just enjoy it for a few hours and then you slowly move on to the next game. We’ll start working on them tomorrow. Monday’s a day off and they need to relax. It’s a great feeling knowing we won the series last night, but the challenge was, can we come out and play on a Sunday.” – Head coach Dave Van Horn on sweeping Mississippi State

“Getting the sweep is huge. You look back at your first weekend and there’s three wins that you can sit on for a while. Mississippi State’s a good team, they’ve got some injuries but we’re really excited we came away with these three wins. It’s huge. We’re glad to get a good start.”– Carson Shaddy on the SEC opening series sweep

“We’ve all three been here and we’ve all played in SEC series. We just wanted to come out and show the young guys that the intensity does come up. I think the older guys took it to heart that we weren’t playing very well on Sunday’s and we just came out here and emptied the tank.” – Carson Shaddy on ending the series on a strong note

“They have some of the best hitters in the country on that team. You just have to pitch to them low in the zone. You can’t try and do too much. We came with that game plan today. We came into this game with a pretty solid game plan and it worked.” – Josh Alberius on why Arkansas had so much success against MSU hitters

Up Next
Arkansas will play a single game on Wednesday at Baum Stadium to close out its 11-game homestand against New Orleans. First pitch is set for 6 p.m. and will be broadcast on SEC Network+. The game can also be heard on the radio on the Razorback Sports Network.