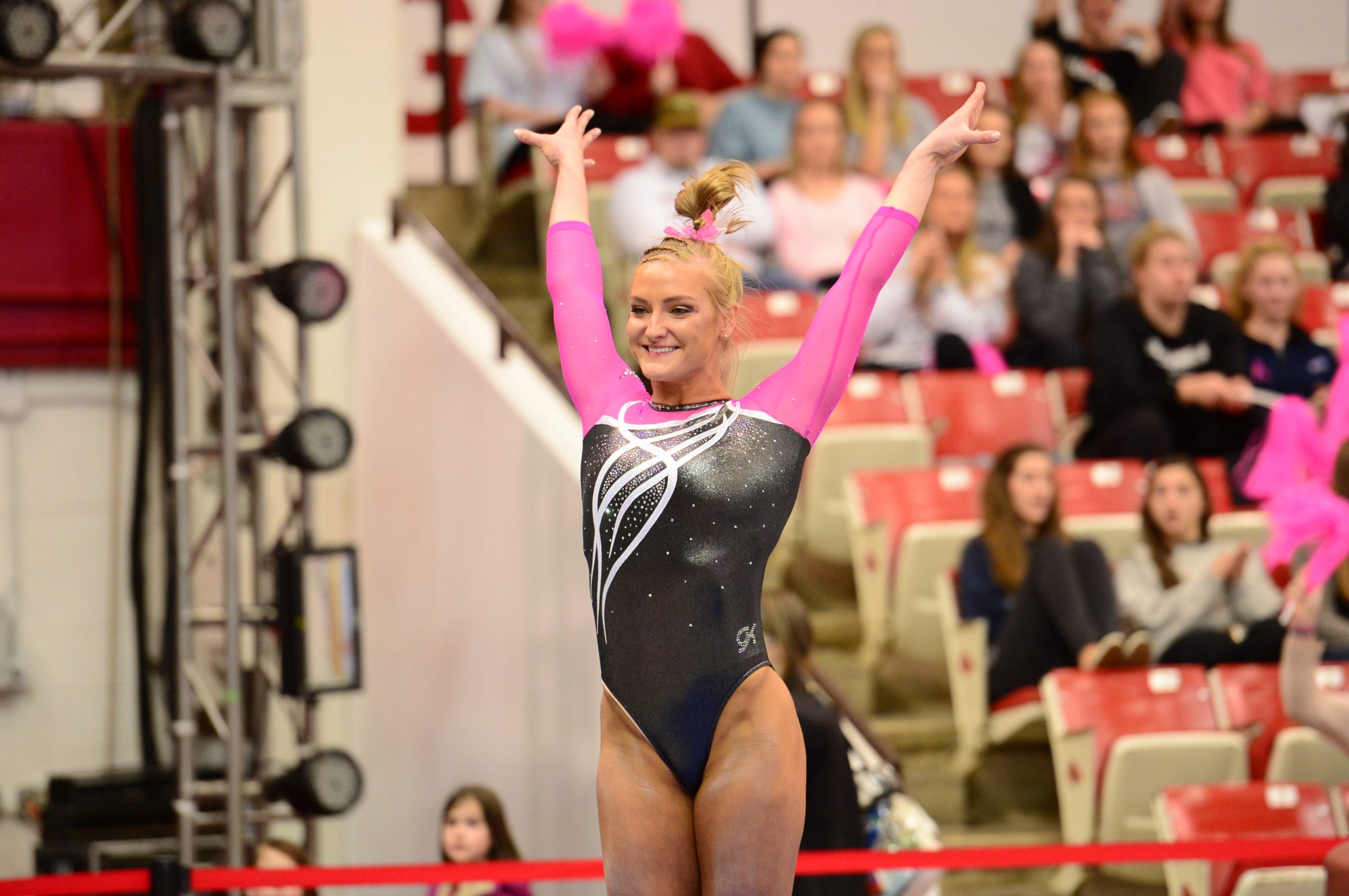 NORMAN, Okla. – The 10th-ranked Arkansas gymnastics team tied for third at the OU Quad Friday night inside the Lloyd Noble Center, recording a 195.700. The Razorbacks fell back after the second rotation, but tallied scores of 49.050 in each of the final two rotations to make up ground, and tie Arizona State for third place.

First Rotation: Arkansas Bars: 49.175
Arkansas tallied four scores over 9.800 in the first rotation. Freshman Sarah Shaffer posted a 9.825 in the two spot, her ninth-straight meet with a 9.800 or higher on bars. Senior Braie Speed followed her career high 9.950 against Arizona last week with a 9.900 to lead the Razorbacks. It’s her third meet in a row with a 9.900 or higher on the event. Fellow senior Amanda Wellick posted a 9.800 while sophomore Hailey Garner recorded a 9.875 in the six spot.

Second Rotation: Arkansas Beam: 48.425
After a 9.875 to start the rotation from sophomore Jessica Yamzon, the Razorbacks were forced to count a fall on the beam, but rebounded with two big scores in the final two spots. Garner posted a career high 9.925, while sophomore Michaela Burton posted a 9.850 as the anchor.

Third Rotation: Arkansas Floor: 49.050
A pair of freshmen anchors recorded Arkansas’ highest scores on the floor as Sarah Shaffer and Sophia Carter recorded scores of 9.875 each. Shaffer has tallied a 9.875 or higher in eight of the last nine meets, including five scores over 9.900. Yamzon scored a 9.800 to round out the Razorbacks’ best as she has tallied a 9.800 or higher in all but two meets this season.

Final Rotation: Arkansas Vault: 49.050
Speed again led the Razorbacks with a 9.900 in the final rotation. Speed has not scored below a 9.850 on vault all season as she notched her second score of 9.900 of the day. Arkansas’ first four competitors in the rotation all recorded over a 9.800, including a 9.875 from Shaffer to tie her career high. Wellick tallied a 9.825 while Yamzon posted a 9.800 to round out Arkansas’ best on the event.

Arkansas returns to the Barnhill Arena for the final time this season next Friday for a rematch against Denver and a matchup against Iowa State. The Razorbacks will honor seniors Braie Speed and Mia Bargiacchi, as well as student-assistant coach Leah MacMoyle.  The meet is scheduled to begin at 6:45 p.m. Tickets can be purchased here.