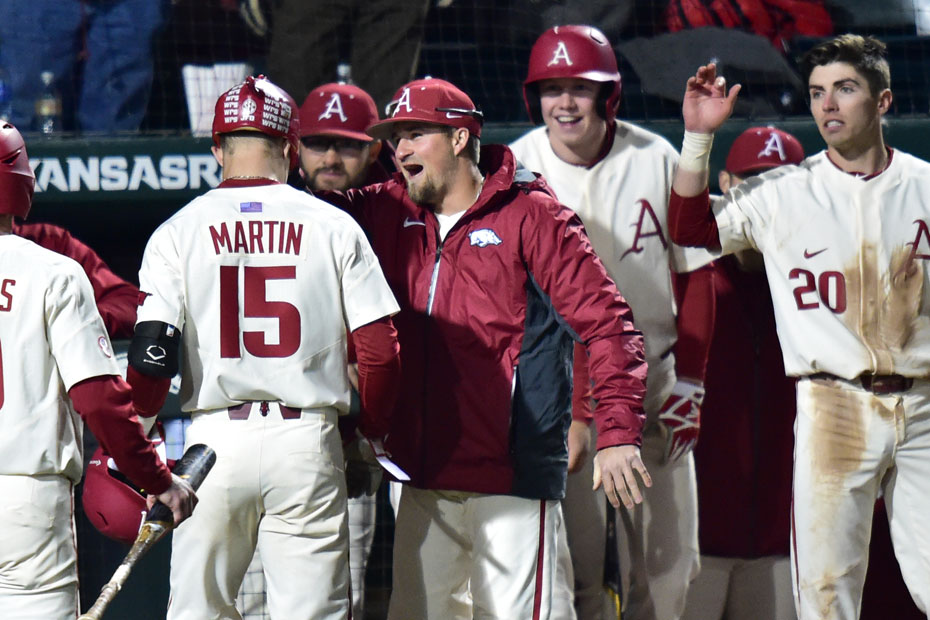 FAYETTEVILLE, Ark. – After one of its longest roadtrips in recent seasons, the No. 5 Arkansas Razorbacks will return home for 15 of their next 18 games, starting with a two-game midweek series with ULM beginning on Tuesday. First pitch with the Warhawks is set for 6:30 p.m. at Baum Stadium and the series will continue on Wednesday at 3 p.m.

FOLLOW LIVE
Both games will be streamed via SEC Network+, the online-only arm of the SEC Network on WatchESPN.com and the Watch ESPN app. Brett Dolan (PxP) and Troy Eklund (Analyst) will have the call for both games.

As always, Arkansas’ Sportscaster of the Year Phil Elson will call all three games on the radio for the Razorback Sports Network from IMG and he’ll be joined by former Razorback Bubba Carpenter. That radio broadcasts are also available on the Razorback Gameday app.

For the last eight games and roughly two weeks, Arkansas had to play away from Baum Stadium, including weekend series at No. 2 Florida and, most recently, No. 4 Ole Miss. Now, the Hogs get to return to the friendly confines of their home field, a place where they’ve thrived.

Arkansas has built up a 14-2 record in series wins over Bucknell, Dayton, USC, Kent State, Texas, and, most recently, No. 4 Kentucky at Baum Stadium this year. As a team, the Razorbacks are hitting .358, while the pitching staff has garnered a 2.71 ERA. The starting pitchers have picked up seven of the 14 victories, while the staff as a whole is holding batters to a .233 average. At the plate, the Hogs have smashed 36 of its season’s 53 homers at Baum Stadium and are slugging a combined .629.

One player that has been red hot at home and on the road is freshman outfielder Heston Kjerstad. The Amarillo, Texas native was the best hitter on the team during the eight-game road stretch hitting .455 and leading the team in all the slash categories (.970 slg%, .514 ob%), and he’s totaled 15 hits with nine going for extra bases.

He also clubbed four home runs after hitting just three in the first 20 games of the season. Over his last 10 games, the Amarillo, Texas native has hit .450 (18-for-40) with five home runs and 12 RBIs. He’s currently on a 12-game hitting streak, which is the longest active streak on the team.

RAZORBACK PRIME 9
>> Arkansas now sits at 19-9 on the year and 5-4 in the SEC, which still puts it in a tie for second in the SEC Western Division, one game behind Ole Miss.

>> In its nine conference games, the Hogs have continued to show a strong offense, hitting a combined .337 with 71 runs scored and 24 home runs.

>> Infielder Carson Shaddy led all Hog hitters over last week’s four-game stretch, hitting an even .400 with six hits in 15 at-bats. Shaddy also drove in six RBIs over that stretch with one home run and one stolen base.

>> Shaddy has at least one hit in 11 of his last 13 games and now has eight multi-hit games.

>> It’s been a strong roadtrip for Kjerstad as he’s hit .455 over the eight-game stretch, leading the team in all the slash categories (.970 slg%, .514 ob%), and he’s totaled 15 hits with nine going for extra bases. He also clubbed four home runs after hitting just three in the first 20 games of the season.

>> Kjerstad currently has the third-best batting average in the SEC .390 and is on a 12-game hitting streak, the longest active streak on the team.

>> After falling by one run in both games two and three at Ole Miss over the weekend, Arkansas has now played eight one-run games this season, winning three against Arizona, USC and Memphis.

>> The Razorbacks still rank first in the SEC and second in the nation in home runs (53) after hitting six against Ole Miss over the weekend. Before Saturday’s game two with the Rebels, the Hogs had hit at least one homer in 12-straight games.