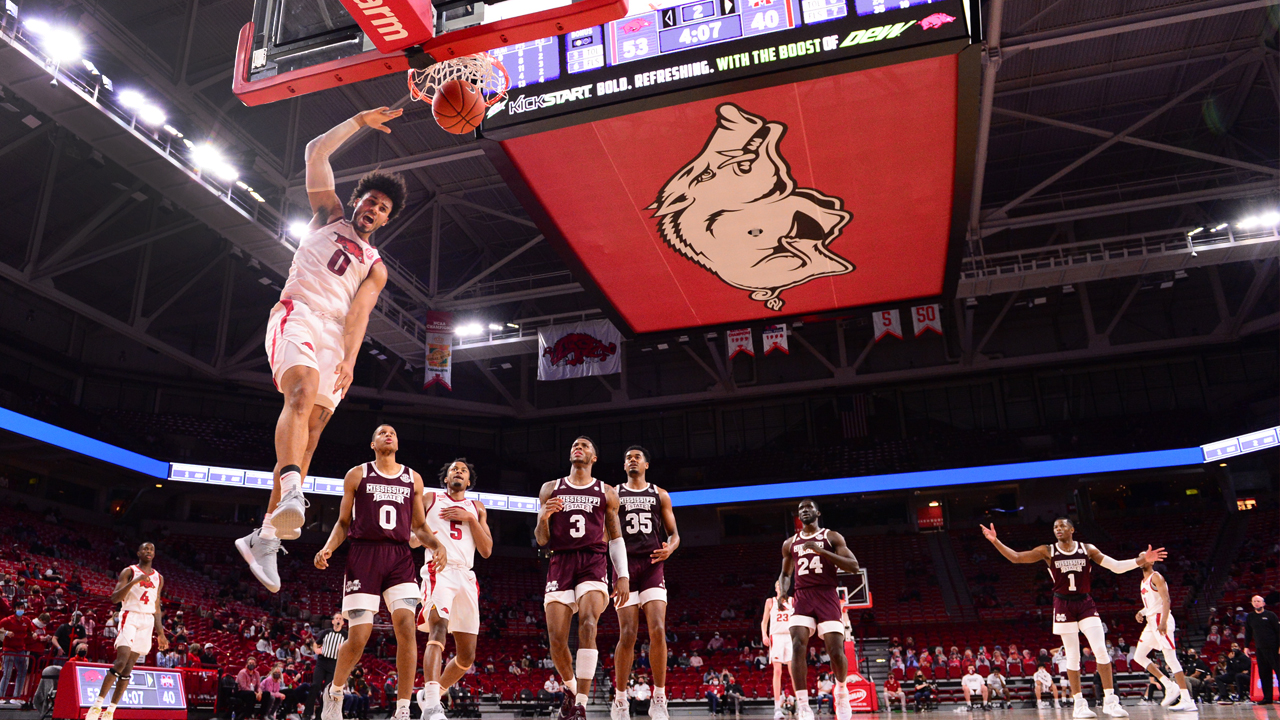 FAYETTEVILLE – Arkansas used a 21-2 run in the first half and a 10-2 run to start the second to claim its fourth-straight SEC victory with a 61-45 decision over Mississippi State Tuesday night at Bud Walton Arena.

Arkansas (14-5, 6-4 SEC) had four players with at least seven rebounds as the Razorbacks out-rebounded Mississippi State, 45-34. That total was significant in that the Bulldogs (10-9, 4-6 SEC) entered the game 15th in the NCAA in rebound margin (+8.7), 18th in offensive rebounds (13.3) and 33rd in overall rebounds (39.7). MSU only managed eight offensive rebounds as Arkansas had 30 defensive boards (Mississippi State missed 34 field goals). Also, MSU had two of the top 10 rebounders in the SEC in Tolu Smith, who was 11th in the NCAA in offensive rebounds, and Abdul Ado. The pair combined for just six rebounds and just two on the offensive end.

Justin Smith had his second double-double of the year with 10 points and 10 rebounds. Connor Vanover and Davonte Davis each had eight boards while Moses Moody grabbed seven. Vanover and Moody each scored 13 points and Davis contributed 10.

Arkansas was down 14-2 to start the game as the Razorbacks missed 16 of its first 17 shots of the game. With 7:48 left in the first half, the Hogs used a 21-2 run, making 9-of-14 shots over the span, to take a 28-20 lead with 26 seconds left before the break. Moody had nine points in the run while JD Notae contributed eight. The Bulldogs grabbed a loose ball under their basket and made a layup at the buzzer to provide the halftime score of 28-22.

Tolu Smith led Mississippi State with 10 points and five rebounds. Arkansas held Iverson Molinar and D.J. Stewart Jr,. to a combined 14 points in the game on 5-of-15 shooting. The pair ranked third and fourth in the league in scoring as each averaged 17.6 ppg.