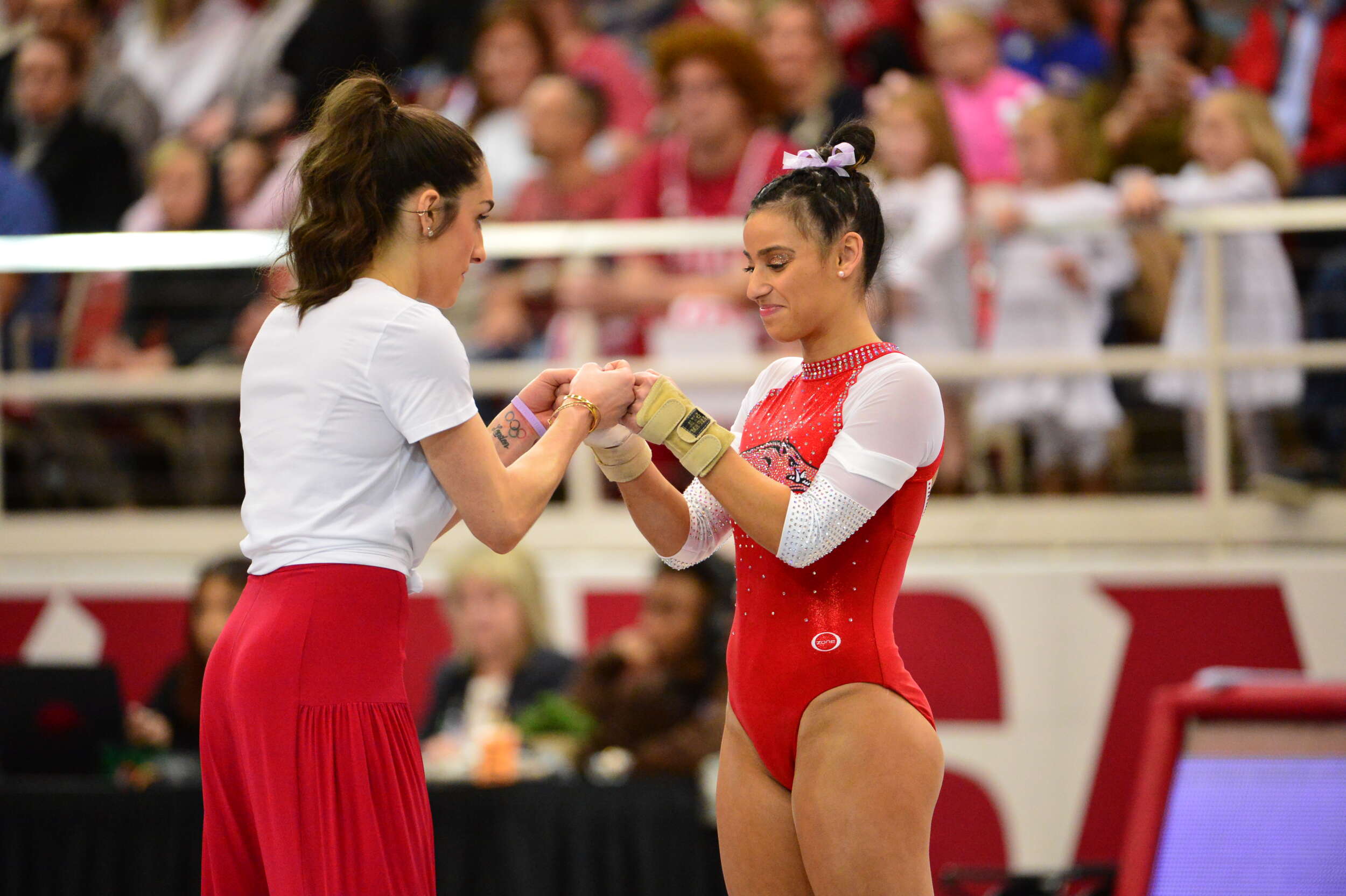 FAYETTEVILLE, Ark. – The University of Arkansas gymnastics team scored above the 196 mark for the seventh consecutive meet on Friday night and snagged six event titles, but fell short to No.20 Auburn, falling to the Tigers, 196.500-196.025.

5,224 fans flocked to Barnhill Arena for Women’s Empowerment night on Friday evening, the ninth highest in program history. Since the start of the Wieber era, the Razorbacks have hosted three, top-10 crowds.

Sophomore Kennedy Hambrick finished the night with scores of 9.900 or higher on three of four events for a 39.500 all-around score, good for her fourth-straight all-around title.

Arkansas posted a season-high 49.100 on the vault, led by three strong vaults from Hambrick, Sarah Shaffer and Amanda Elswick. Shaffer’s Yurchenko half layout scored a 9.875 in the fourth spot, making it the fifth time this season she scored a 9.800 or higher on the vault. Hambrick’s 9.900 was a season-high for the Pearland, Texas native – as she showed off a Yurchenko 1.5 for the first time this season. Elswick showed off her Yurchenko full with a 9.850 in the anchor position.

After a rough start, the Gymbacks finished extremely strong and managed four-straight impressive scores. Hailey Garner started the upward trend when she stuck her giant full double-back dismount, scoring a 9.850. Bailey Lovett’s beautiful ray earned her a 9.875 and Arkansas continued to climb. Hambrick and Shaffer went back-to-back on the bars with 9.900s tying for the beam title. It was the first time in the bars rotation for Shaffer.

Junior Sophia Carter earned her tenth career beam title, performing her back-handspring layout step-out series for the crowd. Carter’s 9.900 helped Arkansas to its score of 49.200 in the event, second highest mark for the Razorbacks this season.

Arkansas stayed confident through its final rotation, improving its overall score from last week, the Razorbacks finished with a 49.375 on the floor, led by Hambrick and Carter’s matching 9.925s. The duo each won the event title and combined, they have claimed five floor titles for Arkansas this season. It is the fourth time this year that Hambrick’s beautiful roundoff back-handspring double pike and top-of-the-line performance skills earned her a 9.925 from the judges.