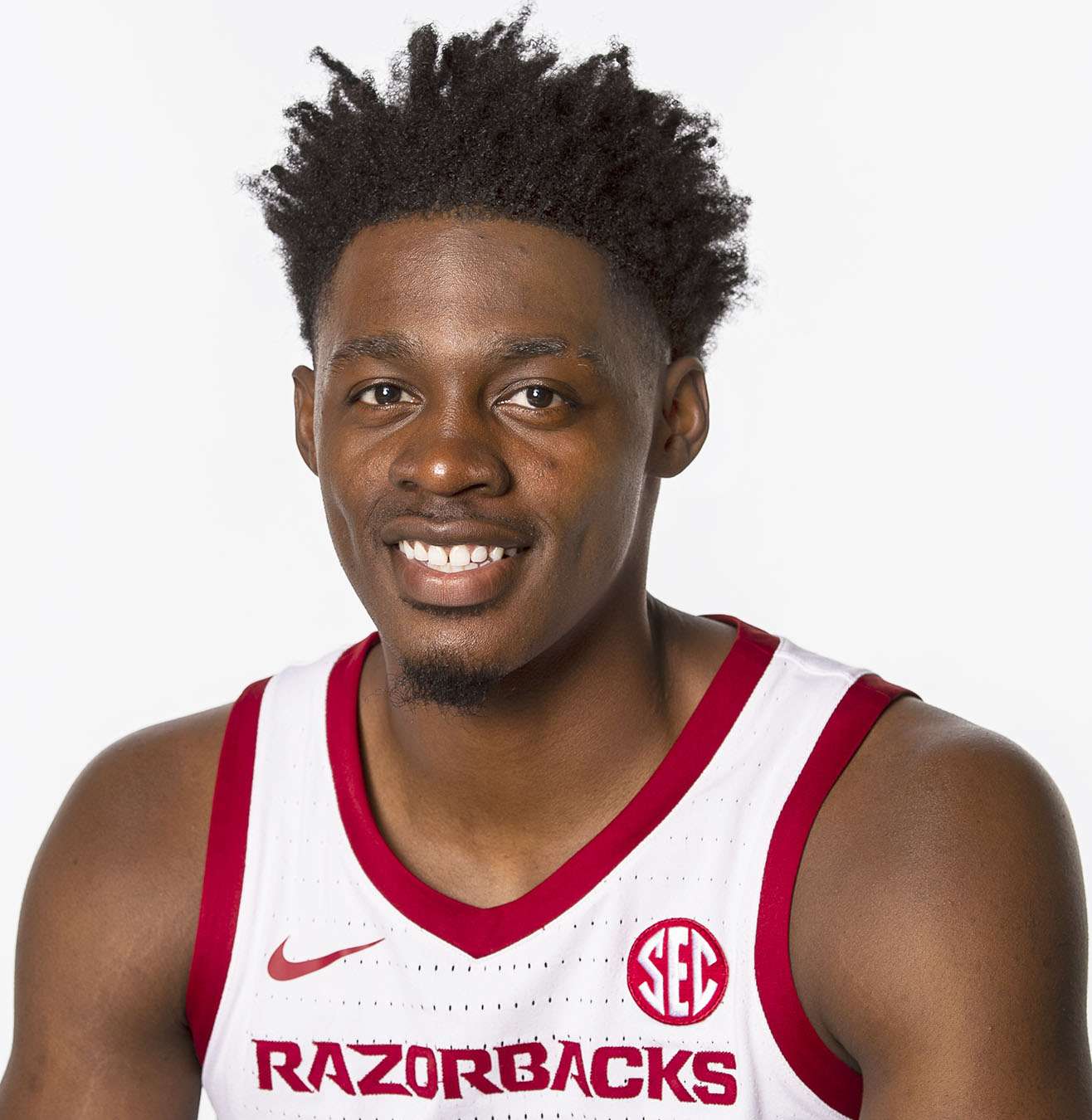 – Represented Arkansas on the SEC Men’s Basketball Leadership Council … Member of the Arkansas Student-Athlete Advisory Committee.
– Named to the 2019 AND 2020 SEC Community Service Team.
– With 100 blocks and 92 steals for his career, Bailey is 1 of 5 Razorbacks with 100+ blocks and 90+ steals, joining Steven Hill, Derek Hood, Oliver Miller and Todd Day.

2019-20 (Sr.):
Named the SEC Defensive Player of the Year by HoopsHD.com … Had 45 blocked shots to rank 88th in the NCAA/6th in the SEC … Had at least one blocked shot in 26 of 32 games this season and at least one steal 21 times … Led the team in deflections with 142 deflections (9 vs Valpo & Auburn / 8 vs South Dakota & @ LSU) … Was 2-of-12 from 3-point range last season (and career) but made a vast improvement as a senior, making 15-of-39 (.385) from deep … Pulled down a then career-high nine rebounds and tied then career-high with three steals versus Rice … Had a career-high four steals versus North Texas … Recorded first career double-double with 12 points and career-high 11 rebounds in the win over Montana • Accounted for five of Arkansas’ 10 blocked shots vs. Texas Southern … The five rejections tied a career high … For the four games of the Collegiate Hoops Roadshow, averaged 6.8 points and 5.3 rebounds … Led the team with seven blocked shots and hit two free throws with 11 seconds left versus Northern Kentucky to put the Hogs up four and seal the win … Scored 10 points vs Valpo, making 2-of-3 from 3-pt range … Had five rebounds, three steals and nine deflections … Tied a career high with five blocked shots, including a one to secure the win with 43 seconds left • Played 33 minutes at Indiana … Only scored three points, but had a team-best eight rebounds and team-best six deflections with a steal and two blocked shots … Held Hoosier big man Trayce Jackson-Davis, who scored 20 points, to just four second-half points and zero field goal attempts the final nine minutes … Had four blocked shots at LSU and played over 30 minutes — both career-highs in SEC play … Versus Kentucky, registered three steals and two blocked shots with five rebounds and an early 3-pointer … Bounced backs from a tough outing at Alabama (0 pts, 1 reb) to have perhaps his best game versus SEC competition vs Auburn … Had then SEC career highs in points (11) and rebounds (7) with an assist, blocked shot and two steals … Just missed SEC career high with 10 points at Mizzou, going 3-of-3 from the field and 1-1 for 3PT … Was 2-of-3 from 3-point range in back-to-back games (at Tennessee and vs Miss State) … At Florida, had SEC career-highs in points (16), rebounds (8), FG made (7), FG attempts (14), 3FG made (2) and 3FG attempts (5) … Scored 12 points in a 22-6 run to help Arkansas trim a 19-point deficit to two … Had 11 points and five boards vs Mizzou, adding a blocked shot and two steals … In the regular-season finale at Texas A&M, had five rebounds, three blocked shots and a steal.

2018-19 (Jr.):
• Named to the SEC Community Service Team … Voted team tri-captain for the 2018-19 season … Played in all 34 games, starting 26 … Had 25 assists, 25 blocked shots and 25 steals for the season … Was second on the team with 110 deflections, including 38 over the last 10 games … Season-high in deflections include eight at Colorado State, seven versus FIU, six versus Western Kentucky and six at Vanderbilt … Scored in double figures in five of the first seven games of the season … Set a career-highs in points (20), free throws made (9) and free throws attempted (11) in the win over UC Davis … Helped put the game out of reach, scoring eight (with six free throws) inside the final five minutes during a 22-1 run … Also attempted and later made his first career 3-pointer … Was perfect from the field (5-for-5) versus Montana State in scoring 10 points … Had season-high and tied then career high with three steals versus UTA, adding 14 points (making 6-of-8 FT) and 5 rebounds … Posted a season-high four blocked shots versus FIU … Nearly had his first career double-double as he posted a career-high eight rebounds with 10 points at Colorado State, adding three assists and two blocked shots … Only made two baskets in eight minutes versus Austin Peay, but both were dunks to start second half and set the stage for a high-energy period … Versus LSU, scored eight points and had three assists, tying a career high … Had a big two-minute spurt in the second half when LSU threatened to take complete control of the game, Bailey scored six points and had two rebounds to keep the Tigers within striking distance with 11 minutes to left in regulation … Took a career-high nine shots at #3 Tennessee, making three and scoring seven points …. Scored eight points (3-of-4 shooting from the field and 2-of-4 from FT line) at #13 Texas Tech … Hit his second career 3-pointer in the LSU win and added two steals … At South Carolina, scored six points and led the team in rebounds (6) and steals (3, tying a then career high) … Also set or tied SEC career highs in rebounds (6), steals (3), free throws made (2) and minutes (25) … Perhaps had his best all-around game versus Mississippi State, especially versus SEC competition … Was 4-of-6 from the field for eight points with four rebounds, in an SEC career-high 27 minutes played … Led the team with four rebounds in the Ole Miss win … Was 3-of-4 from the free throw line versus Alabama, marking career bests for makes versus SEC competition … Set tone early with an “and-one” to start game at Providence … Had a highlight-reel dunk versus Indiana, adding four rebounds and two blocked shots.

2017-18 (So.)
Played in 31 games, starting 16 … Opened the season with a career-high 15 points, making 7-of-8 shots from the field, in a win over Samford … Posted a career-high seven rebounds versus Oklahoma in the PK80  … Added a career-high five blocks versus North Carolina in game two of the PK80 while scoring eight points and grabbing four rebounds in the third-place win over UConn of the PK80 … In Arkansas’ first SEC Tournament game, had nine points, four rebounds, three steals and two blocks … Recorded his fourth-career, double-figure scoring game – third of the season – with 10 points at Mississippi State, his first double-digit effort of his career against SEC competition … Scored seven points and added five boards in a road win at Alabama … Slammed home a career-high four dunks against Troy to go 5-of-8 from the field for 10 points … His five blocks in 18 minutes were the first such performance by a Razorback (5+ blocks in fewer than 20 minutes of playing time) since Moses Kingsley against Mississippi State on Feb. 21, 2015 (via @HogStats).

2016-17 (Fr.)
Played 27 games, starting twice … Recorded season highs in scoring (14), rebounds (7) and assists (2) in a win over Austin Peay (Dec. 3), shooting 7-of-8 from the field … Played a season-high 19 minutes in the second round game of the NCAA Tournament against No. 1 North Carolina (March 19), recording a season-high three steals and adding four points … Went 3-of-3 from the field in a win over Alabama (Feb. 1), finishing with seven points, three rebounds, one block and one steal.