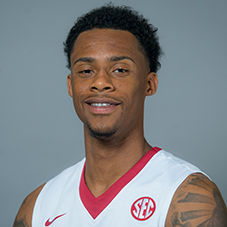 As a Senior (2015-16)
Played in all 32 games, making 30 starts and averaging 15.7 points per game … led the team with 16.1 points per contest in SEC games and shot .918 percent from the charity stripe during league play … joined Pat Bradley as the only players in program history to lead Arkansas in three-pointers made for four consecutive seasons … became the 39th Razorback to score 1,000 career points as he finished with 1,144 points, the 27th-most in program history … knocked down 237 career three-point field goals, the fourth most in school history … made 89 treys to tie for the eighth-most in school history for a single season … hit 52 three-pointers in SEC play to tie for the program record with Jannero Pargo … finished second in the SEC in three-point field goal percentage at .441 … named the SEC Player of the Week on Jan. 11 after averaging 25.5 points per game and making 11 treys … named to the NIT Tip-Off All-Tournament Team after sinking 9-of-15 threes and scoring 31 point against Georgia Tech and Stanford at the Barclays Center in Brooklyn … connected from behind the arc in the first 31 games of the year … made at least four three-pointers in 11 games … Made 45 of 49 free throws in SEC play, finishing at .918 from the charity stripe, the third best mark in program history in SEC play … did not miss a free throw over the final 10 regular season games, making 29 consecutive foul shots … hit the game-tying three-pointer at Dayton with 1.4 seconds left to force OT (Dec. 30) … hit the go-ahead three-pointer with 2.0 seconds left against Vanderbilt (Jan. 5) … went 5-for-5 from long range against Stanford (Nov. 27) in a span of six minutes and 34 seconds, taking Arkansas from a two-point deficit to a 19-point lead … scored a season-high 26 points against Vanderbilt (Jan. 5), making a season-best six three-pointers … scored 20-plus points eight times during the year.

As a Junior (2014-15)
Paced the Razorbacks in three-pointers made for the third consecutive season, with a career-best 65 treys … became the fourth player in program history to lead Arkansas in three-pointers in each of his first three seasons … played in all 36 games during the year and started 16 contests, averaging 7.9 points per game to rank fourth on the team … scored a season-best 20 points twice, against Alabama State (Nov. 16) and Iona (Nov. 30) … scored in double figures 13 times, with seven of those coming in league play … led the team with the fewest number of turnovers (32) among players averaging 11 or more minutes per game … tallied 17 points on 5-of-8 shooting from long range against South Carolina (March 5), which was his highest point total in SEC play … knocked down a season-best five three-pointers twice, against Iona (Nov. 30) and South Carolina (March 5) … recorded three or more three-pointers in 11 games … played a season-high 28 minutes against Ole Miss (Jan. 17) … shot 37 percent (95-257) from the field, 35 percent (65-185) from behind the arc and 70 percent (29-41) from the free throw line.

As a Sophomore (2013-14)
Led Arkansas in three-pointers for the second straight year with 50 … averaged 7.2 points over 32 games, including 14 starts … led the team in scoring four times (4-0), including three times over the final eight games en route to averaging 11.0 points over that span (93 points in 141 minutes) … set a new career-high three times over the final eight contests … reached double figures eight times with a pair of 20-point outings … scored a team season-high and career-best 28 points in the NIT first round win over Indiana State (March 18), hitting 11-of-13 from the field and 6-of-8 from three with a career-high six rebounds … went for double-digits in a half six times, highlighted by 18 in the opening 20 minutes vs. Indiana State … knocked down a three-pointer in 21 of 32 games, including three or more seven times … shot 33 percent (50-151) from beyond the arc and 38 percent (84-222) from the floor … added 1.3 rebounds and 23 assists … opened the season with 18 points on 5-of-6 from three against SIU Edwardsville (Nov. 8) … scored double figures in three of the first four contests, ending with 16 points against California (Nov. 25) at the EA SPORTS Maui Invitational … came off the bench for a team-high 19 points in 17 turnover-free minutes at Mississippi State (Feb. 22) … followed with 10 points in the team’s first win at Kentucky (Feb. 27) since 1994 … hit 7-of-10 from beyond the arc en route to 23 points in just 12 minutes during a 110-80 win over Ole Miss (March 5) in the home regular season finale … seven three-pointers equaled the third-most by a Razorback in an SEC game … scored 51 points over his final 43 minutes played at Bud Walton Arena.

High School
All-time leading scorer at Bartlett High School with over 2,000 points … third-ranked player in the state of Tennessee in the class of 2012, with an ESPN.com scout grade of 88 … named a top 25 shooter in the class of 2012 by ESPN.com … averaged 25 points per game as a senior and never averaged less than 18 points in a season … named to the All-State first team as a senior while leading Bartlett HS to a regional championship … two-time Best of the Preps and All-Region first team selection … four-time All-District honoree, including three stints on the first team … played for Memphis YOMCA on the AAU circuit.

Personal
Born on December 20, 1993 … son of Anthlon and Sheresa Bell … has an older brother; Chris, and three younger brothers; Aaron, Adrian and Alijah … majoring in recreation and sport management.