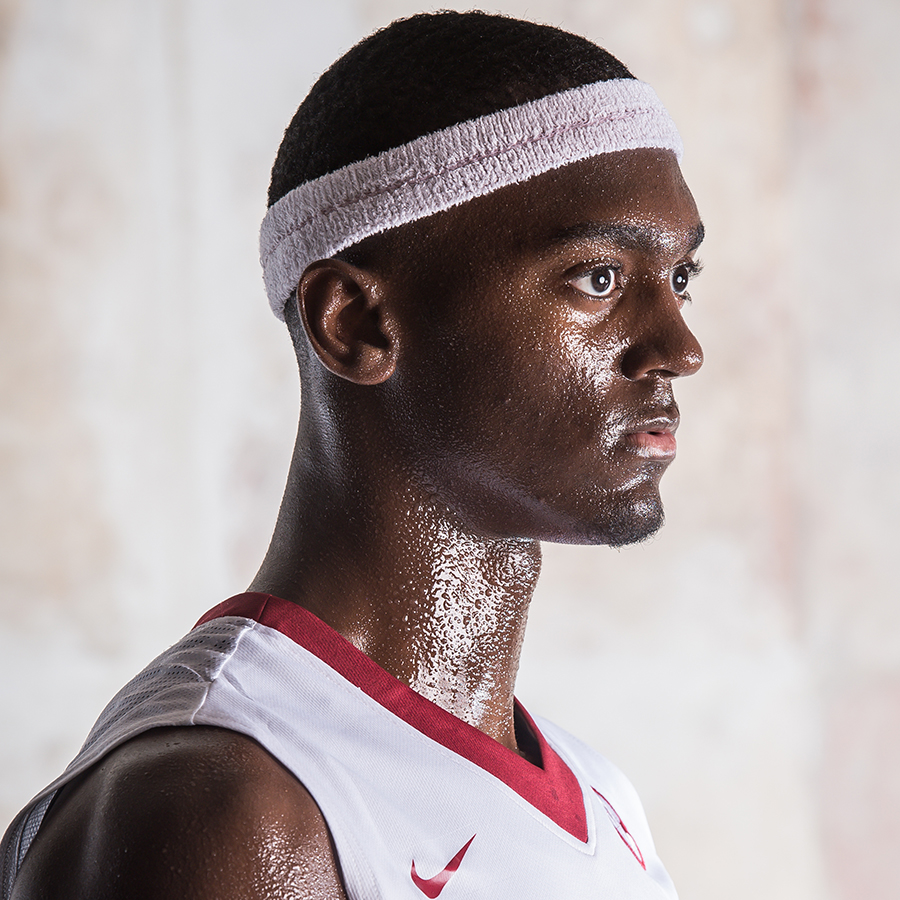 BP Mode
Currently in the top 5 of the SEC in scoring (17.5/2nd), rebounding (8.9/4th), offensive rebounds (3.7/1st), defensive rebounds (5.2/5th) and field goal percentage (.536/2nd), Portis continued to etch his name in the Arkansas record books in 2014-15.
• Second Razorback to be named SEC Player of the Year.
• Just the third sophomore to reach the 1,000-point plateau, joining TODD DAY (1990) and SCOTTY THURMAN (1994).
• First player in program history with five straight double-doubles in SEC regular season action.
• Program record nine double-doubles in SEC play.
• First player in program history with 30 points and 10 rebounds in an SEC game against Vanderbilt with 32 points and 11 boards.
• First player in program history to go for 18+ points and 7+ rebounds in six straight games since CORLISS WILLIAMSON did during his sophomore season in 1994.
• Just the fifth player to record multiple 30-point games in his career against SEC opponents, joining TODD DAY (4), JANNERO PARGO (3), SCOTTY THURMAN (3) and JONATHON MODICA (2).
• Had a 27-game double figure scoring streak that surpassed Todd Day’s 25-game streak from the end of 1990-91 into 1991-92.

Demanding The Rock
The only sophomore on the Wooden Award Final 15 list, Portis became the focal point of Arkansas’ offense and the team leader on and off the court. With 70 straight starts to open his career, Portis has been dominant his last 40 games that includes the final four of his freshman year.

Three Of A Kind
Portis is one of just three high-major players in the country that averaged or is averaging at least 17.5 points and 8.5 rebounds per game.

SEC Checklist
Taking on a league full of future NBA first round draft picks and some of the best big men in the country, Portis posted a double-double or 20-point game against 12 of the 13 SEC members in the regular season. Below is Portis’ checklist against SEC foes. Kentucky is the only opponent Portis didn’t do either, as he finished the Feb. 28 meeting in Lexington with 15 points and eight rebounds. Over his 36-game SEC career, Portis has a 20-point game or double-double against every league opponent.

As A Freshman (2013-14)
Just the sixth Arkansas player to earn All-SEC (second team) honors as a freshman … also named to the SEC All-Freshman team and USBWA All-District VII team … finalist for the Kyle Macy National Freshman of the Year … only player to start all 34 games … second on the team in scoring (12.3) and first in rebounding (6.8) while ranking tied for seventh in the SEC on the glass … broke the Arkansas freshman record with 230 rebounds … also broke the freshman single-game scoring record with 35 points, including 29 of the team’s first 35, in a win over Alabama (Feb. 5), hitting 14-of-17 from the field with nine rebounds and six blocks … made field goals vs. Alabama tied the second-most in an SEC game at Arkansas while the blocks tied for the fifth-most … three-time SEC Freshman of the Week, equaling a league-high and a program record … closed the season with two straight double-doubles to finish with a team-best five … reached double figures 23 times, highlighted by doing so in a single half in 12 games (9 second half) … led the team in scoring seven times, on the glass in a team-high 16 games and both in the same contest on five occasions … grabbed a team-best 86 offensive rebounds, including at least one in 31 of 34 games … only freshman in the nation with 50 blocks and 50 assists, finishing sixth in the SEC in rejections (1.6) … blocked 35 of his 54 shots in SEC action, good for the sixth-best total in league play at Arkansas … second on the team with 35 steals and fifth with 50 assists … went for double figure points in nine straight non-conference games – the longest streak by a Razorback that season – while adding double-doubles against UT Martin (Dec. 19) and UTSA (Jan. 4) … only double-double in SEC play came in a win over Kentucky (Jan. 14) with 11 points and 10 rebounds … scored double figures in 10 of 18 SEC games and grabbed less than five rebounds just once … season-high 35-point night against Alabama capped a four-game stretch in which he averaged 21 points and 7.5 rebounds while shooting 32-of-48 from the field … broke the freshman rebound recording during a 13-board night against Indiana State (March 18) in the NIT first round … averaged 11 points and 11.5 rebounds over 25 minutes in two NIT contests.

High School
Named the Gatorade Arkansas Boys Basketball Player of the Year … ranked as a top 16 recruit in the nation by ESPN.com, Scout.com and Rival.com … top-ranked player in the state of Arkansas in 2013, with an ESPN.com scout grade of 92 … named to USA Basketball National Junior Select Team for the 2013 Nike Hoop Summit at the Rose Garden in Portland, Ore. … first Arkansas signee since 2004, and the 13th overall, to play in the McDonald’s All-American game held at the United Center in Chicago … led the West squad to a 110-99 win as the team’s second-leading scorer with 12 points … completed the trifecta of national appearances by playing for the East squad in the Jordan Brand Classic at the Barclays Center in Brooklyn, N.Y. … one of just eight players in the country to participate in the McDonald’s All-American game, Nike Hoops Summit and the Jordan Brand Classic in 2013 … four-time state champion at Hall High School … scored 1,093 points over his final two seasons … led Hall HS to a 26-5 record and a 6A State Championship as senior, averaging 20.4 points, 10.3 rebounds, 3.8 blocks and 2.1 assists per game … named the Arkansas Democrat-Gazette Player of the Year … posted 26 double-doubles and reached the 20-point plateau 15 times … had one triple-double of 15 points, 15 rebounds and 10 blocks against Mills University Studies … won a 7A State Championship as a junior … averaged 16.0 points, 10.4 rebounds and 3.7 blocks per game … scored 20+ points 10 times and 17 double-doubles … named to the Arkansas Democrat-Gazette All-State first team … led the Arkansas Wings Elite to the AAU National Championship in the summer of 2012, playing alongside Moses Kingsley and Manuale Watkins.