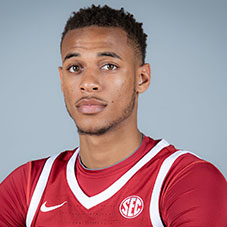 2018-19 (So.) HIGHLIGHTS:
• Voted AP All-America Honorable Mention and selected to the CollegeInsider.com Lefty Driesell Defensive All-America Team.
• Named first team All-SEC by the Coaches and Media to become just the sixth Razorback to be a consensus first team pick.
• Named SEC All-Defensive Team to become just the second Razorback to be named first team All-SEC and SEC All-Defensive in the same season.
• Named All-District by USBWA (1st Team) and NABC (2nd Team).
• Kareem Abdul-Jabbar Award top 10 finalist (top center in the nation).
• Scored in double figures 28 times and pulled down double digits in rebounds 13 times.
• Ranked sixth in the NCAA and first in the SEC in field goal percentage (.660) …. 95 percentage points better than second place (Tennessee’s Grant Williams).
• One of two players in the NCAA to shoot at least 60 percent and average at least 15.0 points, 8.0 rebounds and 2.0 blocked shots … Also, one of five players in the NCAA to shoot over 60 percent while averaging over 15 points and 8 rebounds.
• Gafford was the only player in the SEC to rank among the league’s top 5 (or top 10 for that matter) in scoring (4th, 16.9), rebounding (2nd, 8.7), blocked shots (3rd, 2.03), offensive rebounds (2nd, 2.84) and defensive rebounds (3rd, 5.81) … Was the only player to rank among the league’s top seven in both offensive and defensive rebounds.
• Twice earned SEC Player of the Week honors (Nov. 19 and Mar. 11).
– FIRST: Had a then-career high 27 points and then career-high 12 rebounds vs. Indiana … Scored 19, second-half points while grabbing seven rebounds and getting two steals … Was 9-for-10 shooting in the period while the rest of the team was just 5-of-23 and scored 16 points … Three times in within the final 11 minutes, Indiana took a one-point lead and, each time, Gafford answered to put the Razorbacks back on top.
– SECOND: (shared honor with USC’s Chris Silva) … Led the Razorbacks to 2-0 record and had perhaps his best career game … Averaged a double-double (24.5 points and 10 rebounds for the wek) … Scored a game-high 20 points at Vanderbilt, missing just three shots and blocking four shots, and game-high 29 versus Alabama … Versus Alabama, recorded his 10th double-double as he grabbed a career-high 16 rebounds and he scored 29 points, his second-best career output … Had a double-double (11 points and 12 rebounds) in the first half alone and became just the third player in the NCAA this season to have as many as 29 points, 15 rebounds, two steals and two assists in a game. Was responsible for Arkansas’ first 11 points (scored six and assisted on five) and later scored 10-straight points in the second half.
• Team-best 151 deflections, including 10 at Colorado State, nine vs. Austin Peay and seven on three occasions.
• Had a double-double in the opener versus Texas with 20 points and 12 rebounds, which tied a career high at the time.
• Was 8-for-8 from the field versus Montana State (scoring 16 points) with seven rebounds … Tied his own and others school record for best FG% in a game (8 attempts minimum),
• Registered third double-double —21 points and 12 rebounds — versus FIU, adding four blocked shots.
• Fourth double-double came versus UTSA, scoring 13 points with a then career-high 14 rebounds … Had 11 points and eight boards in the second half … Added two blocked shots.
• Fifth double-double consisted of 19 points and 10 rebounds versus Texas State … Added two blocked shots … Made nine free throws and set career high with 14 free throw attempts … Also played a career-high 35 minutes.
• For second straight game, had a double-double vs. Austin Peay (16 pts and 10 rebs) while once again playing career-high 35 minutes … Also tied carer high with three steals and added four blocked shots … Overall, had nine deflections.
• Battled foul trouble at Texas A&M< but still recorded his third straight double-double, getting 11 points and 11 rebounds.
• Scored a career-high 32 points vs. LSU on 14-of-19 shooting, including a dunk with 30 seconds left to force overtime.
• Posted eighth double-double versus Missouri (13 and 10) … Had an off-balanced shot at the buzzer to cut deficit to two at halftime that spurred second-half comeback … Played 35 minutes with zero fouls.
• Went 7-for-7 from the field at #13 Texas Tech and led the team in scoring (16)) … Battled foul trouble in the first half, played seven minutes with two points … Played 19 minutes in second half and made all six FG.
• Scored a game-high 23 points at LSU, making 11-of-15 from the field … Added eight rebounds, two blocked shots and two steals … Scored 15 in the first half to lead the Razorbacks to a 45-41 advantage at the break.
• Had game-high 28 points vs Vandy, making 9-of-14 FG and career-high 10 free throws (12 attempts) … Had three assists, career-high in SEC game … Added nine rebounds … Scored first five points of second half.
• At Missouri, scored team’s first 10 points and finished with 26 on 12-of-17 shooting … Added eight rebounds and two blocked shots.
• Posted ninth double-double with 23 points and 13 rebounds in home loss to Texas A&M … Was 5-of-5 from the field in the 2nd half … 13 rebounds is second-best career total.
• At #4 Kentucky, scored 14 points with eight rebonds and two blocked shots … Battled foul trouble in the first half and had seven rebounds in the second half, including five offensive.
• Led team with 15 points (6-of-9 shooting) and six rebounds versus Florida in the SEC Tournament.

2017-18 (Fr.) HIGHLIGHTS:
• Named to SEC All-Freshman Team by league coaches
• Was the first Arkansas freshman in program history to record 400 points, 200 rebounds and 60 blocks in a season (@HogStats).
• Ranked 22nd nationally and second in the SEC with 76 blocked shots.
• Shot 60.5 percent from the field, which would have ranked 14th nationally and tops in the SEC but he did not meet the NCAA minimum of making five shots per game (averaged 4.7).
• Named SEC Freshman of the Week three times … Was only SEC freshman to receive the weekly honor three times and became just the third Razorback to earn the honor multiple times (Bobby Portis and Patrick Beverley).
– FIRST (Dec. 11): Combined to make 13-of-17 field goals versus Colorado State (5-of-9 for 14 points) and Minnesota (8-of-8 for 16 points) with a total of 13 rebounds.
– SECOND (Jan. 22): Posted 14 points and 11 rebounds in loss at Florida, before scoring 15 points with nine rebounds, three steals and three blocks in a win over Ole Miss.
– THIRD (Feb. 19): In wins at Ole Miss (6-of-7 FG and 7-of-10 FT for 19 points and six rebounds) and versus Texas A&M (7-of-8 shooting for 18 points and six rebounds).
• Threw down 75 dunks in 35 games which were more than six other SEC teams and one shy of another league member.
• Tallied three double-doubles, including 16 and 12 versus Florida in the SEC Tournament, 21 and 10 versus No. 14 Auburn and 14 and 11 at Florida.
• Just missed a triple-double against Vanderbilt, recording 16 points, nine rebounds and seven blocked shots.
• The 21 points versus Auburn was his best output in a league game as he had season highs in both field goals made (10) and attempted (15) … Also tied his career-high seven blocks versus Auburn, which are tied for most rejections in a regular season SEC game in school history.
• Had 12 rebounds, including a season-best 10 on the defensive end, versus Cal State Bakersfield.
• Poured in a season-high 25 points (9-of-11 shooting from the field and 7-of-10 from the line) vs. Fresno State.
• Scored double digits in each of his first four collegiate games and had a total of 22 games in double digits in his rookie campaign.