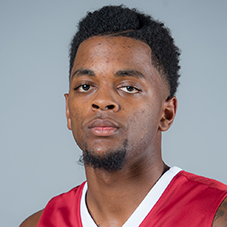 Played in all 36 games and made 21 starts … finished second on the team in scoring, averaging 13.4 points per game … scored in double figures in 27 games … averaged 15.2 points per game in the postseason, scoring 15-plus points in four of the five games … pulled down three-plus boards 18 times, including five of the last six games … lead the team with 13 three-plus assist games … recorded five games of five-plus assist, three more than any other player on the team … averaged 16.7 points per game in the conference tournament, helping the Razorbacks earn a trip championship game for the second time in the last three years … finished second on the team, seventh in the SEC and 46th in the country in free throw percentage at 86.6 percent (136-157) … scored a season-high 30 points on 10-of-13 shooting off the bench, including 6-of-9 from behind the arc, in Arkansas’ win over Ole Miss (Feb. 18) … was one of four Razorbacks in the SEC era to score 30 points in a game off the bench … went 14-for-14 from the charity stripe against Texas (Dec. 17) and 12-of-13 against at Tennessee (Jan. 3) … his 14-of-14 performance from the line against Texas was the second most makes in program history without a miss … was the only player in the last 30 years to have 13-plus points, seven-plus rebounds, five-plus assists and four-plus steals in his Razorback debut.

Played in 32 games with eight starts … helped lead Holmes CC to the NJCAA Elite Eight … averaged 23 points, 4.1 rebounds and 3.1 assists per game … 23 points per game ranked fourth in the NJCAA … shot 46.5 percent from the field and 36.9 percent from beyond the arc … shot 88.5 percent from the foul line, which was fourth in the NJCAA … ranked second in the NJCAA with 230 made foul shots (230-260) … had four 30-point efforts, including 32 three times in the first nine games of the season … reached double figures in all 32 games while scoring 20 points in 24 of 32 games.

High School
Attended Parkview High School in Little Rock, Arkansas … averaged 21.2 points per game and shot over 40 percent from three-point land as a senior … named first team 6A All-State following his senior season … was teammates with Anton Beard … played on the AAU circuit for the Arkansas Hawks.

Personal
Born on Nov. 29, 1995 … son of Deloise and Daryl Macon Sr. … has two sisters, Tiffany and Tierra … majoring in sociology.