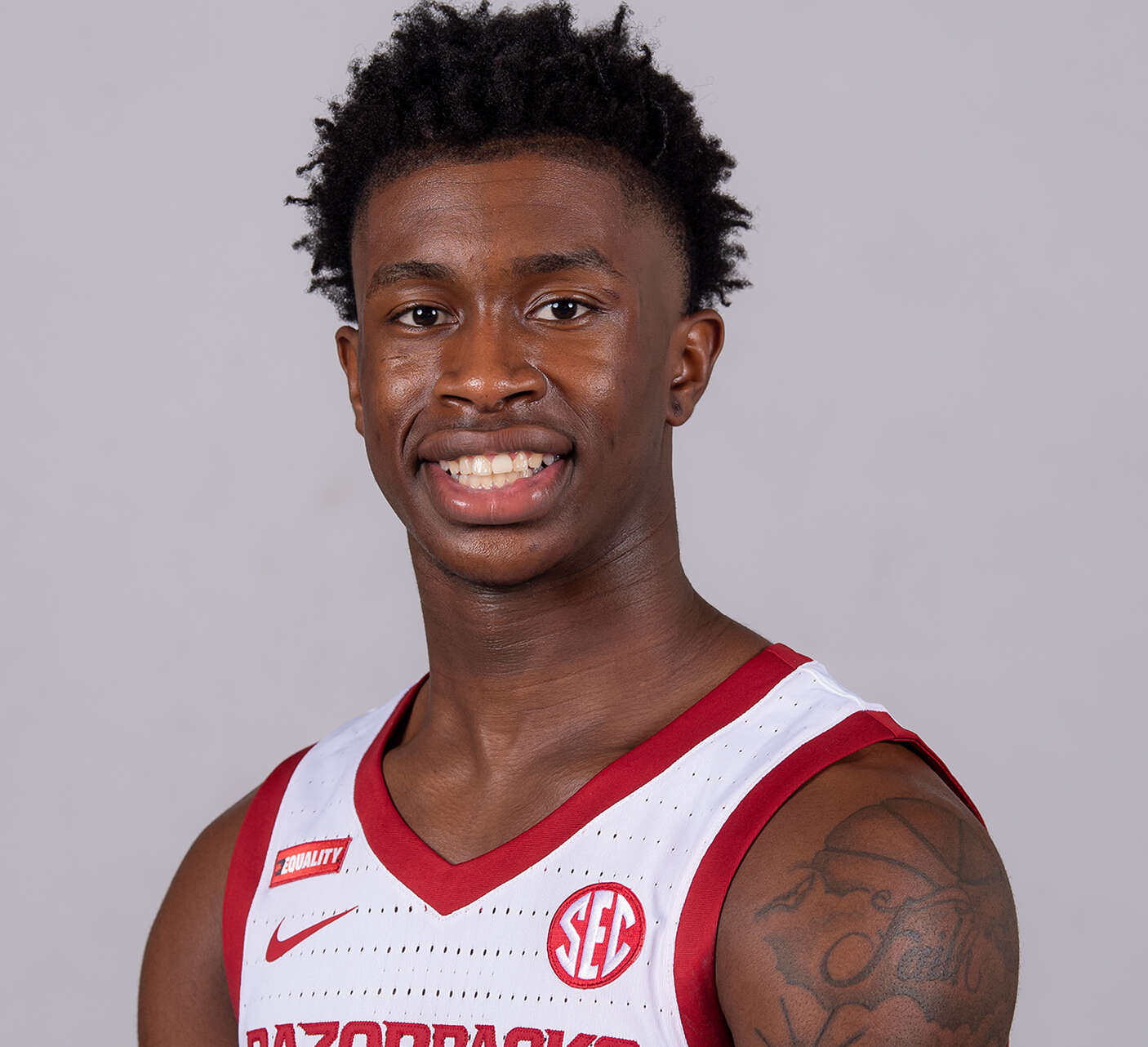 Freshman (2020-21):
• Named the SEC First-Year Academic Honor Roll … Made the Department’s Honor Roll (GPA between 3.0-3.49) for Fall 2020 and Spring of 2021
• Played in 30 games with 17 starts, including each of the last 14 … In the postseason (SEC/NCAA), averaged 12.3 points and was second on the team in rebound average (6.7) and assists (17).
• Hit the game-winning shot versus Oral Roberts with 3.1 seconds in the NCAA Sweet 16.
• Second on the team lead with deflections with 160 … Led the team with 10 deflections at Auburn, nine versus Missouri and nine at LSU … Added 10 vs Georgia.
• On a per 40 minute basis, averaged 14.2 points and 7.5 rebounds.
• I of 2 Razorback freshmen to ever have at least 15 points, 5 rebounds and 5 assists in a game and THE ONLY Razorback rookie to do it twice doing so vs UGA (01/09/21) had 20 points • 7 rebounds • 6 assists and vs LSU (2/27/21)had 15 points • 5 rebounds • 6 assists.
• Led the team with 14 points versus Southern, adding seven rebounds in just 16:20 minutes played
• Saw playing time increase at Auburn in the SEC opener due to Justin Smith injury … Made four “game-winning” plays during a decisive 10-0 run to help secure win: PLAY 1: With Arkansas up two, 76-74, tipped a loose rebound to Connor Vanover that led to two free throws by Moses Moody … PLAY 2: With Arkansas up four, 78-74, got the offensive rebound off Desi Sills FT miss that led to a JD Notae layup … PLAY 3: With Arkansas now up six, 80-74, made a steal in what ESPN analyst Jimmy Dykes called “the best defensive play of the year” at the time … The steal led to a fastbreak and two made free throws by Connor Vanover … PLAY 4: With Arkansas now up eight, 82-74, sank a jumper from the left elbow as the shot clock was winding down to cap the 10-0 run.
• In his first career start (vs Missouri Jan. 2), had four rebounds and a career-high three steals.
• Was impressive on both ends of the floor in the win over Georgia … Scored a season-high 20 points with seven rebounds, six assists and two steals … Also did a good job guarding UGA point guard Sahvir Wheeler … Had 10 deflections and tied Moses Moody with a Plus-Minus of +33 for the game.
• Scored 10 points — all in the second half — in the win over Auburn (1/20) to help Arkansas erase a 12-point halftime deficit.
• Came off the bench vs Ole Miss to provide a huge spark at the time as he made his first four shots with two steals that led to layups… Finished with 14 points (7-of-9 shooting) and six rebounds.
• Sparked Arkansas in the first half at Oklahoma State, scoring 8 of his 13 points and getting all three of his steals.
• In his fourth start, just missed a double-double with 10 points and a season-high eight rebounds with two assists versus Mississippi State.
• Only scored four points and had just two rebounds at Kentucky, but impacted the game … Led the team with +9 thanks to three assists, zero turnovers and two steals … The last steal came on the final play to seal the win.
• At Missouri, only scored eight points, but two came on a layup with 35 seconds left in overtime … Added three assists … Sealed the win with a blocked shot with 4.7 seconds left.
• Led the team with 18 points in the win over Florida … Added five rebounds and three assists … After Florida took its only lead 62-61, Devo put the Hogs back on top with a fast break layup and he added two free throws with 28 seconds left to go up eight.
• In the LSU win, had 15 points, five rebounds and a season-high six assists … Was a bright spot in the first half with seven points and four assists.
• At South Carolina, tied for the team lead and tied his career-high with eight rebounds .. Added two assists and two steals.
• Closed the regular season with a 12-point performance in the Texas A&M win, making several key baskets … Led the team in assists (5) with five rebounds … Made two critical steals down the stretch … First, with 45 seconds left and Arkansas up one, he tipped an inbounds pass and eventually made a pass to Justin Smith for a fast break dunk … Second, up five with eight seconds left, had a steal and fast break dunk to seal the win.
• Had two solid games in the SEC Tournament as he averaged 7.0 rebounds, 4.5 assists and 2.5 steals and 15 deflections … Versus Missouri, had six boards, four assists and 11 points … Versus LSU, pulled down eight boards, tying a season-high, with five assists (just one turnover) and a season-high four steals, adding 10 deflections.
• Versus Colgate, Started a 17-0 first half run with two steals and made a layup at the buzzer in the run for a 36-33 halftime lead .. Finished with 12 points, six rebounds, three assist, two steals, and career-high two blocked shots.
• In the Texas Tech win, had 15 points and six rebounds … Did not allow TTU leading scorer to get off a shot over the final 10 minutes.
• Scored the game-winner with 3.1 seconds left in the Sweet 16 win … Finished with 16 points and tied his career high with eight rebounds.
• Versus Baylor in the Elite 8, tied for the team lead in both points (14) and rebounds (6).

Personal:
Born Sept. 24, 2001, in Jacksonville, Ark. … Son of Terrie Davis and Grandson of Yvette Davis … Plans to major in recreation and sport management.