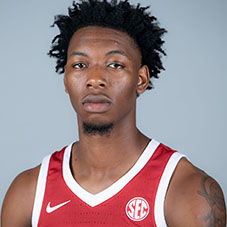 2018-19 (So.):
Earned SEC Winter Academic Honor Roll honors … Played in all 34 games, starting eight … After getting 1st career “second-half” start at Auburn, started each of the last eight games … Had 42 deflections and drew five charges in his eight starts while compiling 32 rebounds, 16 assists and 12 steals … In his first start, versus Texas A&M, was 4-of-4 from the field (8 points), adding two assists and two steals but only played 16 minutes due to foul trouble … At Kentucky, had five rebounds, four assists, a blocked shot and took a charge … Had four assists and three steals (two in the final 23 seconds to clinch victory) with six deflections in Ole Miss win … Scoreless at Vandy but led team in rebounds (7) and deflections (7) … Tied career-high with 8 boards at Providence … Led the team with five rebounds at Indiana … Had six deflections in each of the NIT games … Top deflections games included seven at Vanderbilt and six each versus Texas A&M, versus Ole Miss, at Providence and at Indiana … Took three charges in a game twice — once in the win at #19 LSU and once versus UT Arlington … Was second on the team with 24 charges taken and finished with 105 deflections, averaging just 15.1 minutes per game … First sub off the bench (solo or tied) in 17 of the first 26 games prior to becoming a starter … Hit his first career 3-pointer versus Indiana (missing the first six of his career) as the first half drew to a close to give the Razorbacks a 38-35 lead … Perhaps best all-around game came versus Texas State … In addition to drawing two charges and getting three deflections, hit his second career 3-pointer as the Hogs went on a 17-0 run … Tied then career high with five rebounds while handing out a then career-high four assists … Set or tied then career highs in points (6), rebounds (7) and steals (2) at Texas A&M … Grabbed a career-best eight boards versus Florida … Was 5-of-7 at the free throw line at #3 Tennessee, both career highs … Scored a career-high 13 points at Ole Miss while taking two charges … Hit his third career 3-pointer at #13 Texas Tech as part of 8-0 run in the first half … Despite foul trouble, had a well-rounded game in Georgia win … Drained a 3-pointer, took a charge and had three rebounds, three assists (most in SEC game) and career-high two blocked shots … Took three charges and drained a 3-pointer in the win at #19 LSU … Battled foul trouble in home win over Vanderbilt, but had a key steal late in the game that Coach Anderson said “was one of the biggest plays of the game” … Started the second half at Auburn , which would earn him his starting role over to end the season, and had a career-high three steals … In Ole Miss win, tied career high with three steals, including two in the final minute to lift Arkansas to the win … First led to jump ball and eventually Harris’ game-winning layup with 5.9 seconds left … Second steal came two seconds later to seal the win … Added four assists and six deflections … Did not score at Vandy but once impacted the game … First time in his career, led the team in rebounds (7) and had a team-best seven deflections, with three assists and two steals … At Providence, had a steal on the opening possession and finished with six deflections as part of a solid defensive effort … Finished with 11 points (4-of-6 shooting) and tied a career-high with eight rebounds … Made team’s second 3’pointer of the game as team made its first five of the night … Had team highs with five rebounds and six deflections at Indiana.

Prior to Arkansas:
Ranked as the No. 5 player in the state of Arkansas and the No. 63 small forward in the country by 247Sports.com … Played his prep career at Little Rock’s Southwest Christian Academy … Averaged 11 points, seven rebounds and four assists as a senior for a team that went 31-2 and advanced to the NACA National Championships … Averaged 12 points and eight rebounds as a junior and played AAU with Grassroots Canada, before joining Team Loaded North Carolina on the Adidas Circuit the last two seasons.

Persona:l
Born on Oct. 27, 1998, in Toronto … Son of Kingsley and Roseline Osabuohien … Has two siblings, Precious and Jessica … Majoring in communications.