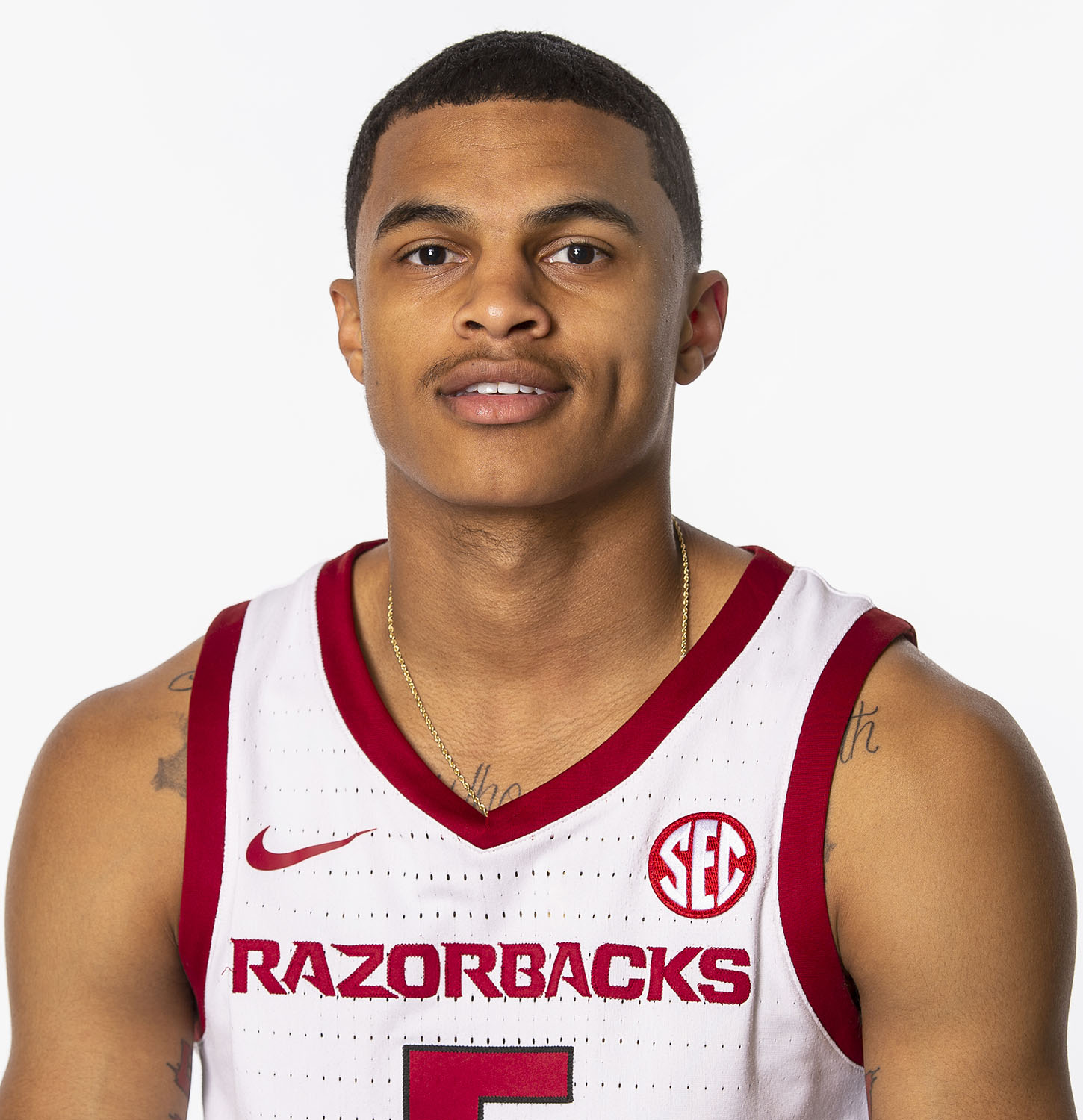 2019-20 (Jr. at Arkansas):
Did not commit a turnover in the first four SEC games (81:26 minutes with 12 assists: including 5 vs Texas A&M and 5 vs Vanderbilt … Overall, did not commit a turnover in six SEC games and logged 430 minutes in SEC play with just 21 turnovers in 18 games … Opened the season by making 2-of-2 from beyond the arc  versus Rice (only made eight triples in the previous year) … Added three steals against the Owls … Led the team with five assists vs Texas Southern and Northern Kentucky … Adding five rebounds vs TX SOU and played over 35 minutes off the bench vs NKU … In the four games of the Collegiate Hoops Roadshow, tied for the team lead with 12 assists and six steals … Part of the 5-guard lineup over the last eight minutes in the SEC-opening win versus Texas A&M … For the game, had five assists, zero turnovers, four rebounds, two steals and was 4-of-4 at the free throw line … Got first start of the season versus TCU and responded with a season-high six assists with seven points and four rebounds … Scored a season-high 11 points at Alabama … Of the 11, scored five straight as part of an 11-1 run that saw the Hogs go from down three to up seven with 1:20 left … His personal 5-0 run consisted of two free throws for the tie and go up one, then hit a 3-pointer … Also, clinging to a 3-point lead versus the Crimson Tide with 21 seconds left, drained two free throws for a 5-point cushion … After going down 14-0 at Georgia, Harris came off the bench to drain a 3-pointer to end the drought … Added two free throws with 2:45 left in the game to trim the deficit to one (83-82) … Added two steals … Started the SEC Tournament win over Vanderbilt … Dished out five assists and scored seven points.

2018-19 (RSo. at Arkansas):
• Voted team tri-captain for the 2018-19 season.
• 7th on the school’s single-season list with 189 assists
• 189 assists are the most in a season by a Razorback sophomore
• 15th in NCAA • 2nd in the SEC in assist-to-turnover ratio (2.86) — 189 assists vs 67 turnovers
• 37th in NCAA • 3rd in the SEC in assists per game (5.6)
• 29th in NCAA • 5th in the SEC in total assists (189)
• Had five games with double-digit assists; 18 with at least five
• Had 16 games with 1 or fewer turnovers (seven with zero — nine with just one)
After having just 12 total assists in the first three games of the season, had 11 helpers with just one turnover in game four (Montana State) … Including that performance versus Montana State, had double-digit assists four times in a six-game span … Run started by getting a then career-high 11 assists versus Montana State (with just one turnover) … Added 11 points against the Bobcats for his first career double-double …. Had 10 assists, with just one turnover, versus FIU … Dished out a career-high 12 assists at Colorado State (with just two turnovers) … Also had career-high four steals … Scored 14 versus UTA, making (8) and taking (11) career highs in free throws … Versus Western Kentucky, had seven assists and no turnovers in 37 minutes … Added 13 points, four rebounds and two steals … Tallied second career double-double, getting 11 points and dishing out 10 assists — with zero turnovers — versus UTSA … Made 7-of-8 from the free throw line … Had seven assists and just one turnover versus Austin Peay … Made just his second 3-pointer of the season, but it was huge to give Arkansas a nine-point lead with 1:48 left … Tied a then career high with 15 points at Texas A&M … Also his first time to lead the team in scoring … Added nine assists with zero turnovers in 36 minutes of playing time versus the Aggies … Had his fifth game with no turnovers, playing 32 minutes versus Missouri … Handed out six assists, scored 10 points and had three steals … At #13 Texas Tech, scored 11 points and had three steals … Made a basket at the buzzer between mid-court and top of the key to give Arkansas a 33-30 lead at the break … Had a career-high two blocked shots versus Georgia as Arkansas blocked 14 as a team … Added 13 points … Scored a career-high 17 points at South Carolina, making 7-of-10 at the free throw line … At Missouri, had 10 assists — most versus SEC competition — with just one turnover, adding four rebounds … Hit game-winning lay-up with 5.9 seconds left in a 74-73 win over Ole Miss … Scored 10 points (3-4 FG and 4-5 FT) versus the Rebels and added nine assists with one turnover (called for a charge) … At Providence, had six assists and three steals with a blocked shot … At Indiana, handed out seven assists with one turnover and two steals.

2017-18 (So. at Arkansas)
Redshirted at Arkansas per NCAA transfer regulations.

2016-17 (Fr. at New Mexico)
Played 20.6 minutes per game for the Lobos, appearing in all 31 contests and making 18 starts as a freshman … Averaged 4.5 points and 2.3 assists per game and scored a career-high 15 points against Nevada on Jan. 7, finishing one rebound shy of a double-double … Finished third on New Mexico’s squad with 2.3 assists per game, including a season-best eight dimes against Utah State on Jan. 4 … Recorded a steal in 17 games, finishing second on the team with 25 takeaways, including a career-high three steals in two different contests.

High School
Played his prep career under head coach Brian Clifton at Word of God Christian Academy in Raleigh, N.C. … Rated a top 15 recruit in the state of North Carolina and led his high school team to a top 40 ranking in the state by MaxPreps … Played for John Wall’s summer team.