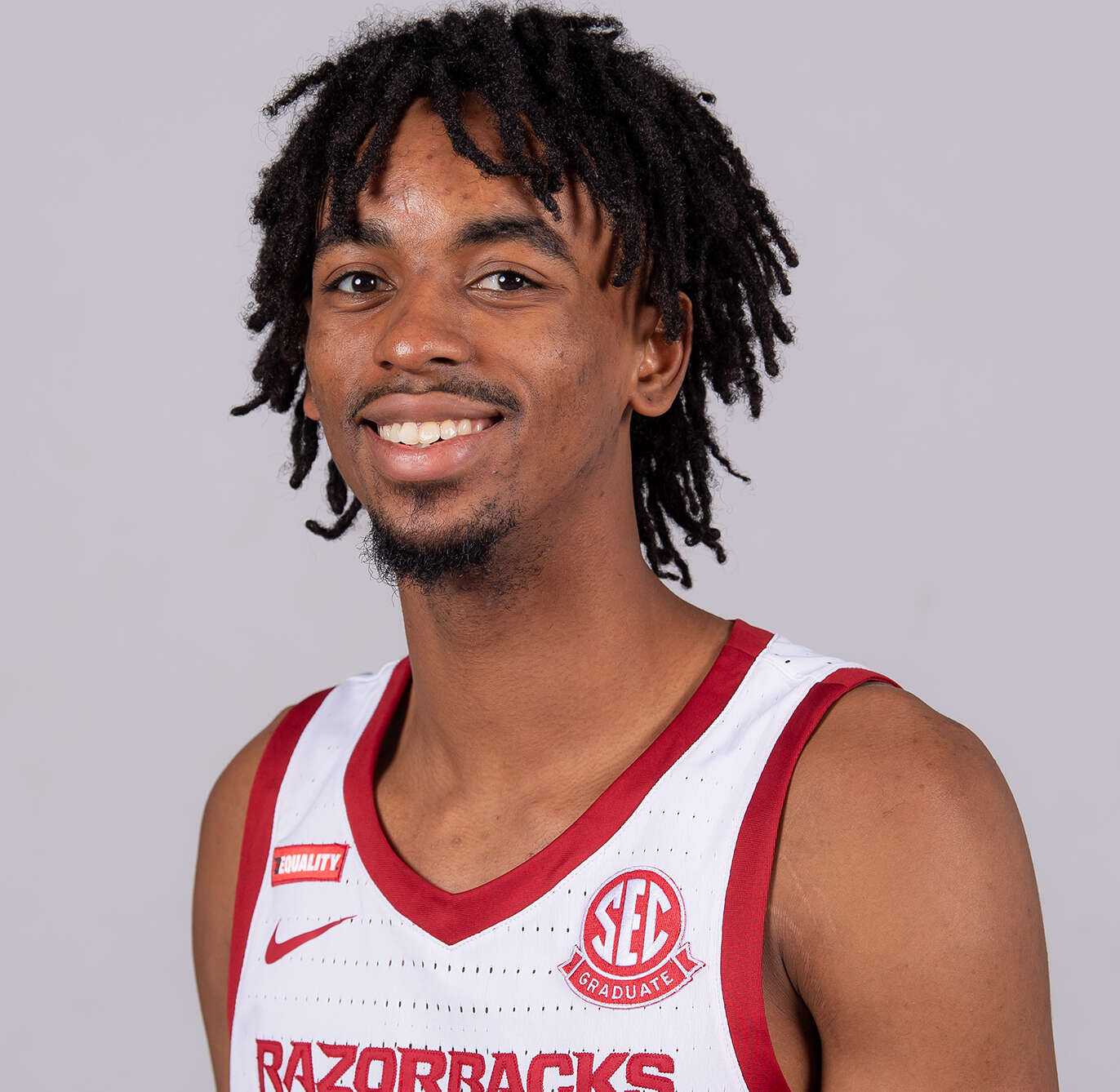 Senior (2020-21 at Arkansas):
• Named the NCAA Tournament All-South Region Team … Averaged 15.5 points, 4.5 rebounds and 3.5 assists in helping Arkansas reach the Elite 8.
• 1 pf 2 Razorbacks to start all 32 games … Had a team-best 123 assists … Averaged 11.0 points for the season but improved to  11.8 in SEC games and 15.5 in the NCAA Tournament.
• Third on the team by taking 13 charges
• Had two double-doubles with 17 points and 11 assists versus Central Arkansas and 15 points with 10 assists versus Georgia … Had a combined 21 assists with one turnover in the two games.
• In addition to strong offensive efforts in wins over Auburn (14 pts) and Vandy (25 pts), had 18 deflections — nine in each game … Added season-best 10 deflections versus Mississippi State
• Was fourth in the SEC in assists (3.8) and fifth in assist-turnover ratio (1.46)
• Only played 17 minutes in the opener, but had 12 points, six assists, five rebounds and a steal
• Stuffed the stat sheet versus UTA with 14 points, six rebounds, four assists, a steal and a blocked shot
• Third career double-double — first in points and assists — versus Central Arkansas with 17 points and a career-high 11 assists … Had zero turnovers • Only played 27 minutes versus Abilene Christian due to an ankle injury … Had season-high seven rebounds and five assists before exiting
• Had 15 points (7-of-11 shooting), six assists and five rebounds at Tennessee
• For the second-straight game, had 15 points but added 10 assists versus Georgia for his second double-double of the year … Only committed one turnover in his 35 minutes played with two steals and four rebounds
• Kept Arkansas in the game vs Auburn (1/20) by scoring 10 of his 14 points in the first half, including a 3-pointer to trim a 16-point deficit with 2:06 left (Arkansas would trail by 12 at the break and won the game) … Added five assists and a season-high four steals
• Had his best game as a Razorback (and second-best career game overall) at Vanderbilt … Scored a season-high 25 points (9-of-15 FG and 3-of-5 3PT) with eight assists, one turnover, five rebounds and tied season-high with four steals
• Only scored six points in the Mississippi State win, but had a season-high 10 deflections, with three steals and a blocked shot, adding five assists
• Scored a team-high 15 points (first time to lead the team in scoring this year) and hit two free throws with 4.3 seconds left to give Arkansas an 81-80 win at Kentucky … Made a season-high five free throws (5-of-5)
• For the second straight game, made a key play late to give Arkansas a win at #10 Missouri as he blocked a shot with 21 seconds left in overtime and the Hogs up one … Finished with 14 points, four assists and four rebounds
• Tallied 12 points with four rebounds in the win over Alabama … Led the team with four assists and had a career-high four blocked shots … Set the tone in the first half, scoring all 12 of his points and making all five field goal attempts in the period
• Only played 12 minutes due to foul trouble in the LSU win, but had six rebounds — his best in an SEC game — and two assists
• Closed the season with an impressive performance versus Texas A&M … Scored 22 points, including 14 in the first half to keep the Hogs in the game … Had a team-best seven rebounds with four assists
• Scored 17 in the NCAA win over Colgate with seven rebounds, four assists and just one turnover in 38:13 … During a 17-0 run in the first half, scored or assisted on 10 of the points
• Led the team with 22 points in the Sweet 16 win over Oral Roberts … Added a team-best six assists with just one turnover in 38 minutes … Scored 10 of his 22 points inside the final 5:35 for the win and assisted on the game-winning shot
• Had 13 points and four rebounds versus Baylor in the Elite 8

Junior (2019-20 at Northern Kentucky):
Horizon League Defensive Player of the Year and earned Horizon League All-Defensive Team honors for the third straight year … Added third team All-Horizon League honors … Averaged 13.9 points, 5.4 rebounds, 3.6 assists and 1.9 steals in helping the Norse to a 23-9 record …Played in 22 games, starting 20 as he missed 10 games due to injury … Named the Horizon League Tournament MVP after putting up 37 points in two games and leading the Norse to the Championship … Turned in a dominant performance in a semifinal win over Green Bay with 23 points – going 6-of-10 from the floor and 10-of-15 at the line – while adding six rebounds, three assists and two steals in a semifinal win over Green Bay … In the championship versus UIC, had 14 points, four rebounds and four assists In his second game back from the injury, had a career-high eight assists with five rebounds at Missouri … Dropped a career-high 31 points versus IUPUI, while also tacking on six boards, seven assists and a career-best six steals … Prior to his career high, had 24 points (9-of-13) with six rebounds and six assists versus Detroit Mercy …. Posted his second career double-double at Green Bay with 17 points and career-high 12 rebounds … Narrowly missed double-doubles with 16 points, nine rebounds and five assists at Milwaukee and 24 points with nine rebounds in the regular-season finale versus Wright State … Closed the season with three straight strong performances, including 16 points and four steals at Cleveland State, 18 points and three steals at Youngstown State and 24 points with two steals versus Wright State … Was on the Lou Henson Award Preseason Watch List … Preseason All-Horizon League First Team.

Sophomore (2018-19 at Northern Kentucky):
Named to Horizon League All-Defensive Team thanks to registering 37 steals and 21 blocks … Showed big improvement over his redshirt freshman season by averaging 13.7 points, 4.4 rebounds and 4.1 assists per game to help the Norse to a 26-9 record and the Horizon League regular-season championship  … Shot 53.9 percent (159-of-295) from the field to rank 54th in nation … Led NKU with 17 points behind 7-for-10 shooting, while adding five rebounds, four assists, two blocks and a steal, in the Horizon League Championship game against Wright State … Earned Horizon League All-Tourney team status … Scored a season-high 30 points in the regular-season. title-clinching win at Green Bay, making 11-of-19 shots, garnering Horizon League Player of the Week honors when coupled with the performance at Milwaukee where he registered first career double-double with 13 points and 10 rebounds at home versus Milwaukee … Poured in 25 points, including 22 in the first half, and dished out six assists against UIC … Went 8-of-11 from the floor and 2-of-3 from three in the game as well .. Preseason All-Horizon League Second Team.

Redshirt Freshman (2017-18 at Northern Kentucky):
Horizon League All-Freshman Team member is averaging 5.8 points, 2.3 rebounds and 2.0 assists per game … Horizon League All-Defensive Team member leads NKU in steals (42) and blocks (19) … Posted 15 points versus James Madison and 14 points against Iona to help NKU to a second-place finish in the Islands of the Bahamas Showcase … Recorded a steal in 26 of NKU’s 32 games, including 12 games with multiple steals.

Freshman (2016-17 at Northern Kentucky):
Received medical redshirt following season-ending hand injury … Started each of the first eight games for the Norse, averaging 4.6 points a contest in 18.8 minutes … Played 36 minutes, shooting 5-of-9 from the floor to score 13 points against Morehead State.

High School:
A 2015 and 2016 all-conference (Ohio Capital Conference) honoree for Pickerington Central HS … Led the Tigers to more than 20-wins and district championship as a senior … Averaged 15 points, seven rebounds and seven assists a game during his junior campaign.