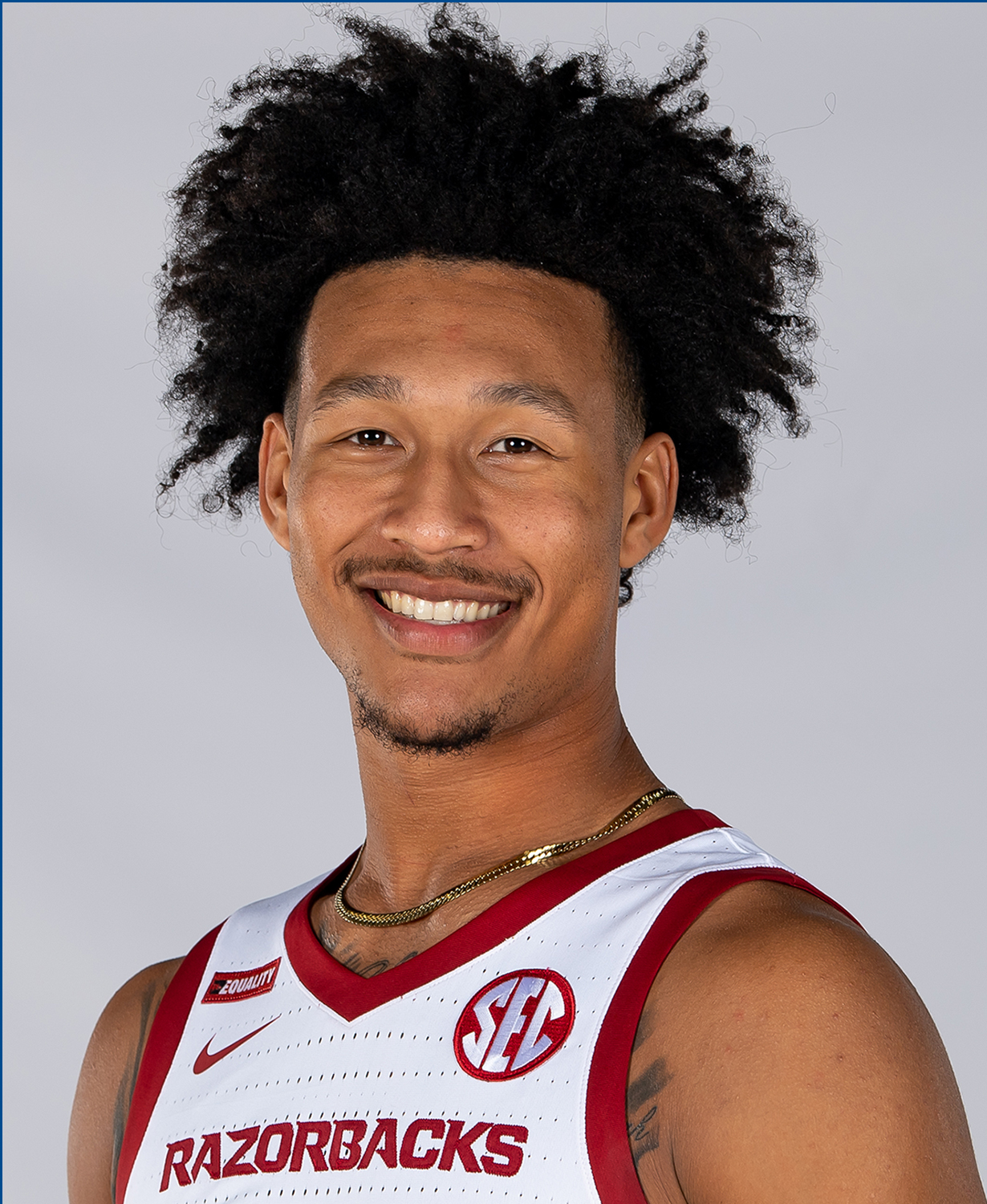 Freshman (2020-21):
• Named the SEC First-Year Academic Honor Roll.
• Played in 26 games with five starts, including the final three games of the NCAA Tournament.
• Led the team by taking 16 charges, including two each versus UT Arlington, Georgia, LSU (1/13), Auburn (1/20) and Texas Tech.
• Became the only Razorback to come off the bench and get 10 rebounds three times in a season: Mississippi Valley State, at LSU and vs Florida. (HogStats.com) … Overall, had four games with double-digit rebounds, getting 10 in a start versus Texas Tech.
• On a per 40-minute basis, averaged a team-best 12.1 rebounds … Averaged 9.6 points and 1.8 blocked shots.
• In his collegiate debut (Miss Valley State) had a game-high 10 rebounds, including eight defensively … Just missed a double-double, scoring nine points (2-5 FG • 2-4 3PT).
• Scored six points with seven rebounds, including six on the defensive end, versus Lipscomb..
• Had two rebounds and an assist in 4:20 played at Auburn.
• Saw extended time versus Missouri and responded with eight points and two blocked shots.
• Earned his first career start at Tennessee … Scored six points on 3-of-3 shooting
• Came off the bench versus Georgia … Only scored two points but impacted the game in other areas … Led the team with nine rebounds (four offensive), took two charges and had two assists with a steal and a blocked shot.
• Tied a season-high by pulling down 10 rebounds at LSU, scored seven points and added two steals … Took two charges.
• Had a breakout game in the win over Auburn (1/20) … Scored seven points (including a 3-pointer) with seven rebounds, two assists, two blocked shots and a steal … Played all 20 minutes of the second half in the come-from-behind win … Grabbed an offensive rebound in midair and threw it down for his first career dunk to cap a 18-4 run and give Arkansas its first lead (47-45).
• Only played nine minutes versus Mississippi State, but had two steals to tie his season high.
• Had nine points and tied for team-high in rebounds with seven in the Kentucky win .. Made a season-high 5-of-6 free throws … Scored four points late in the game, including a put-back on the offensive end at 3:06 to make the score 74-68 and making two free throws with 1:51 left to make the score 78-73.
• Injured his right knee in the first half at Oklahoma State … Missed the second half versus the Cowboys and played just nine minutes versus Mississippi State.
• Dished out a career-high three assists at Missouri.
• Tied his career high with 10 rebounds (seven defensive) vs Florida.
• Scored a career-high 13 points in the win over Alabama .. Had a +30 in his 22 minutes played … Was dominant in the second half … scored 12 of his 13 points in the second half and he pulled down all eight of his rebounds in the period.
• Stuffed the stat sheet in the LSU win .. Season-high four blocked shots and tied season-high with two steals … Added 10 deflections, eight points, six rebounds and two assists and was a team-best +15 in season-high 29:49 minutes played.
• In his third career start – versus Texas Tech in the NCAA second round — only scored one point but tied his career high with 10 rebounds and had a career-high four assists … Had six boards and all four rebounds in the second half … Also took two charges.
• Versus Baylor in the Elite 8, was 4-of-5 from the field and grabbed four rebounds with a blocked shot and a steal … Scored six of Arkansas’ first nine points.