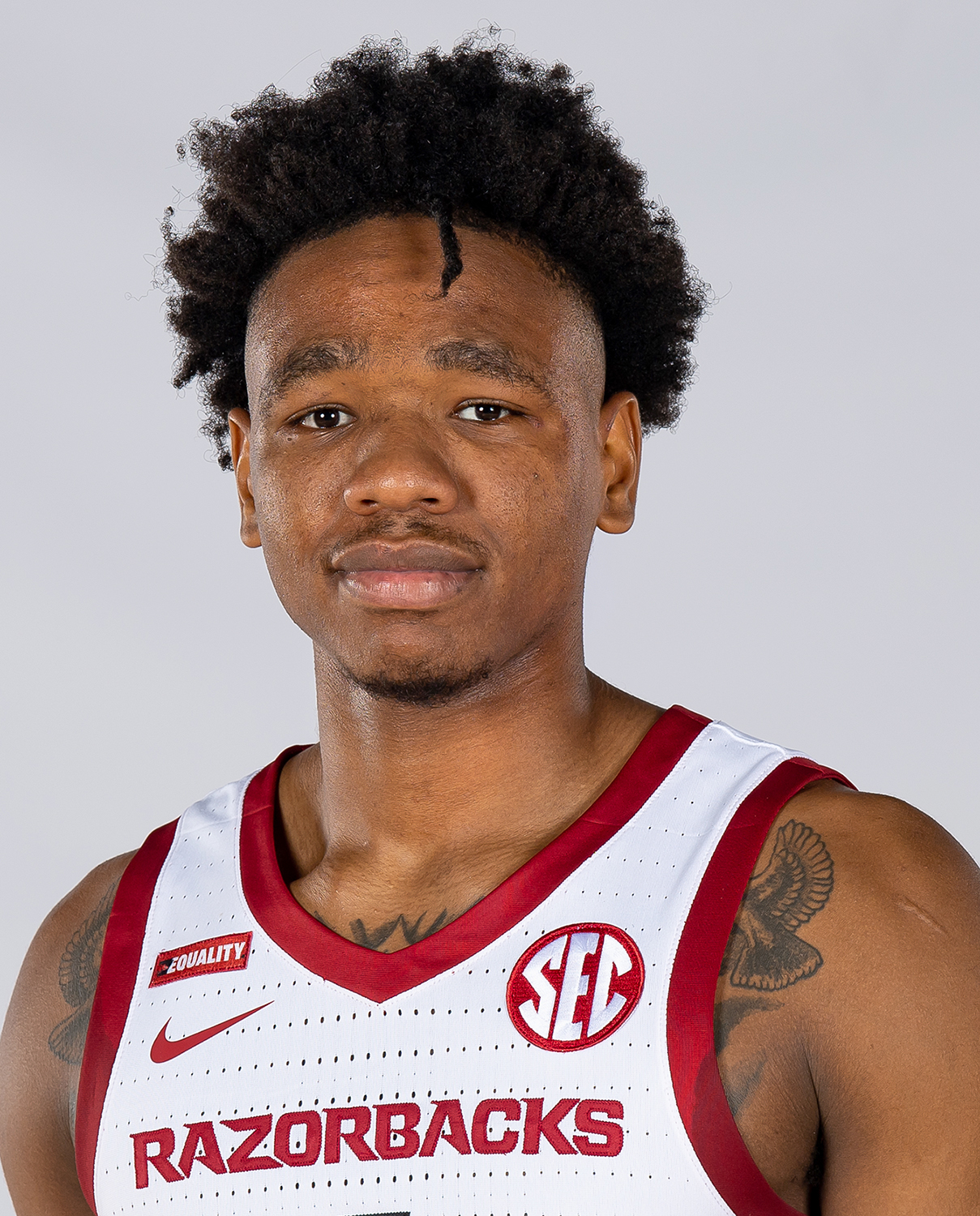 General:
• Played two seasons st Jacksonville before transferring to Arkansas … Was rated the 29th-best “Sit-Out” Transfer in the Nation by ESPN.com for the 2020-21 season.
• Sat out the 2019-20 season at Arkansas due to NCAA transfer regulations and played two seasons with Arkansas.
• AS A RAZORBACK: Scored 1,070 career points
• OVERALL: Scored 1,999 career points and had 228 career steals

2020-21 (R-Jr. at Arkansas):
• Named the Bleacher Report National Sixth Man of the Year and the SEC Coaches Sixth Man of the Year … Was Arkansas’ first sub 16 times and Arkansas was 13-3 in those games … Third on the team in scoring (12.8 ppg) but led the team in scoring 22.2 points per 40 minutes (Moses Moody was second at 19.9 ppg) … Led the team in steals (46) and ranked 12th in the SEC in steals per game (1.44) … Was 7th in the SEC in FT made (92).
• Scored in double figures 21 times this season … Led team in scoring seven times
• Lone start for the season came at home vs Auburn (1/20)
• Had a game-high seven assists with five rebounds in the season opener
• Had 16 points and six rebounds versus North Texas • Scored his 1,000th career point (5:09 of 2nd half) versus Central Arkansas … Had a game-high 22 points, including 17 in the second half, adding three steals and six assists with just one turnover
• Versus Oral Roberts, finished with 15 points, 5 rebounds, three assists and tied career-high with three blocked shots … Made a then career-high seven free throws (7-of-8)
• Scored 19 in the win over Abilene Christian, including 17 in the second half … Made two key 3-pointers —one to put Arkansas up 12 with 3:05 left and hit another to seal the win 1:23 left
• Scored 21 in the win at Auburn, including 19 in the second half … Made a then career-high seven free throws and had a season-high four assists
• Led the team with 19 points at Tennessee (season-best 63.6% shooting 7-of-11 FG) … Added four rebounds and three assists
• Led Arkansas and tied a season-high with 22 points at LSU, including 14 in the first half … Scored nine points during a 12-0 run for the Hogs
• Led the team with 19 points vs Ole Miss – 14 in the second half … Only made four shots from the field but three were 3’s … Had career-highs for free throws made (8) and free throws attempted – tied (9) … Added five rebounds for the second straight game • Scored 11 points at Kentucky, including eight in the first half and making 2-of-3 from deep in the period
• Broke a mini slump with a 12-point performance in the Alabama win, making 2-of-4 from 3-point range … His last triple gave Arkansas its largest lead (16 points with 5:22 left in the game) … Added three assists (his most in 12 games) with two steals
• Played perhaps his best overall game — including his best defensive game — in the win over LSU … Scored 18 points while tying a season-best with six rebounds (his most in an SEC game) and two steals while taking his fourth charge of the season
• Trumped that performance the next time out in the win at South Carolina with 21 points, five rebounds, five assists and five steals … The 21 points and five assists both tie his best performances in an SEC game … He became the first Razorback to have at least 20-5-5-5 in a game since Kareem Reid versus Louisville on Dec. 9, 1997 (HogStats.com)
• Only scored nine in the season finale versus Texas A&M but they all came in the second half (making 6-of-6 FT) as Arkansas completed the come-from-behnd win … Added four rebounds and three steals
• In the SEC quarters versus Mizzou, had a season-best 27 points — his best as a Hog and 4th-best overall in his career — with four assists and four rebounds
• Added three steals in SEC semis vs LSU
• Only made three 3’s versus Colgate but all three were key and added three steals … Down four, Notae scored six straight to put the hogs up two with 10:20 left … With the game tied, made a triple and two free throws and Arkansas led the rest of the way … Last 3 came with 3:21 left to put the game out of reach
• Down 10 in the first half to Texas Tech, hit back-to-back 3-pointers to start a 20-8 run to end the first half and give Arkansas a 2-point lead … Only scored once in the second, a free throw with 19 seconds for a 2-point lead … Grabbed the final rebound on the defensive end to seal to win over the Red Raiders
• In the Elite 8 contest versus Baylor, tied for the team lead in scoring with 14 points despite playing just 14:47 after fouling out with 13:38 left in the second half … Was 5-of-6 from the field, including 2-of-2 from 3-point.

2018-19 (So. at Jacksonville):
Voted second team All-ASUN after averaging 15.5 points, 6.2 rebounds and 3.4 assists; all team highs … Scoring average ranked fifth in the ASUN while ranking fourth in assists, fourth in steals (1.6) and 10th in rebounding … Posted 24 games in double figures, including nine 20-point games, with nine games of five assists or more and three games with at least 10 rebounds … Had three double-doubles, including a triple double at Kennesaw State (15 points, 10 rebounds and 10 assists … First double-double was the game prior to triple double, posting 12 points with 13 rebounds versus Lipscomb … Other double-double came versus Stetson as he scored 16 points and grabbed a career-high 14 rebounds … Scored a career-high 40 points, adding eight rebounds and five assists, versus Florida Memorial … Made 16-of-22 shots from the field and 5-of-6 from 3-point range … Had 29 points and five assists in the regular-season finale versus Florida Gulf Coast … Versus Indiana, posted 15 point and rebounds.

2017-18 (Fr. at Jacksonville):
Named ASUN Freshman of the Year after averaging 15.4 points, 4.7 rebounds and 1.8 steals while shooting 41 percent from 3-point range … Started all 28 games he appeared in until injuring his foot and missing the final five games of the year … Scored 432 points, the second-most by a Dolphin freshman in a season … Scored a then career-high 30 points vs. Middle Georgia State … Scored 20 or more points seven times, four times in ASUN play … Knocked down a season-best five three-pointers twice (at UAB, at Michigan) … Hit two free throws with one second left to lead the Dolphins to a win at Stetson … Led ASUN freshman in scoring (15.4 ppg), minutes (31.4 mpg) and steals (49) … Was the ASUN Player of the Week once and Newcomer of the Week twice.