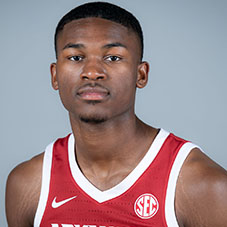 A three-star recruit by 247Sports.com, which also rated him the 11th-best prospect in Texas … Ranked as high as the 37th-best shooting guard in the country by 247Sports.com and as high as the 132nd overall player in the country by Rivals.com … Had a Scout grade of 90 … Played at Grace Preparatory Academy as a senior after beginning his high school career at Cedar Hill High School (Cedar Hill, Texas) … As a senior, named an All-Star by the Texas Association of Basketball Coaches for 6A, 5A Private Schools … At Cedar Hill, averaged 21 points and six rebounds per game … Led the Longhorns to a 29-5 overall record, finishing 12th in the state of Texas … During the spring and summer, Phillips played for Dallas Showtyme Elite, averaging 23 points, six rebounds, seven assists and three steals

Born Feb. 2, 1999, in Fort Worth … Son of Michael and Lynn Phillips … Has one sibling, Kennedy … Majoring in communications.