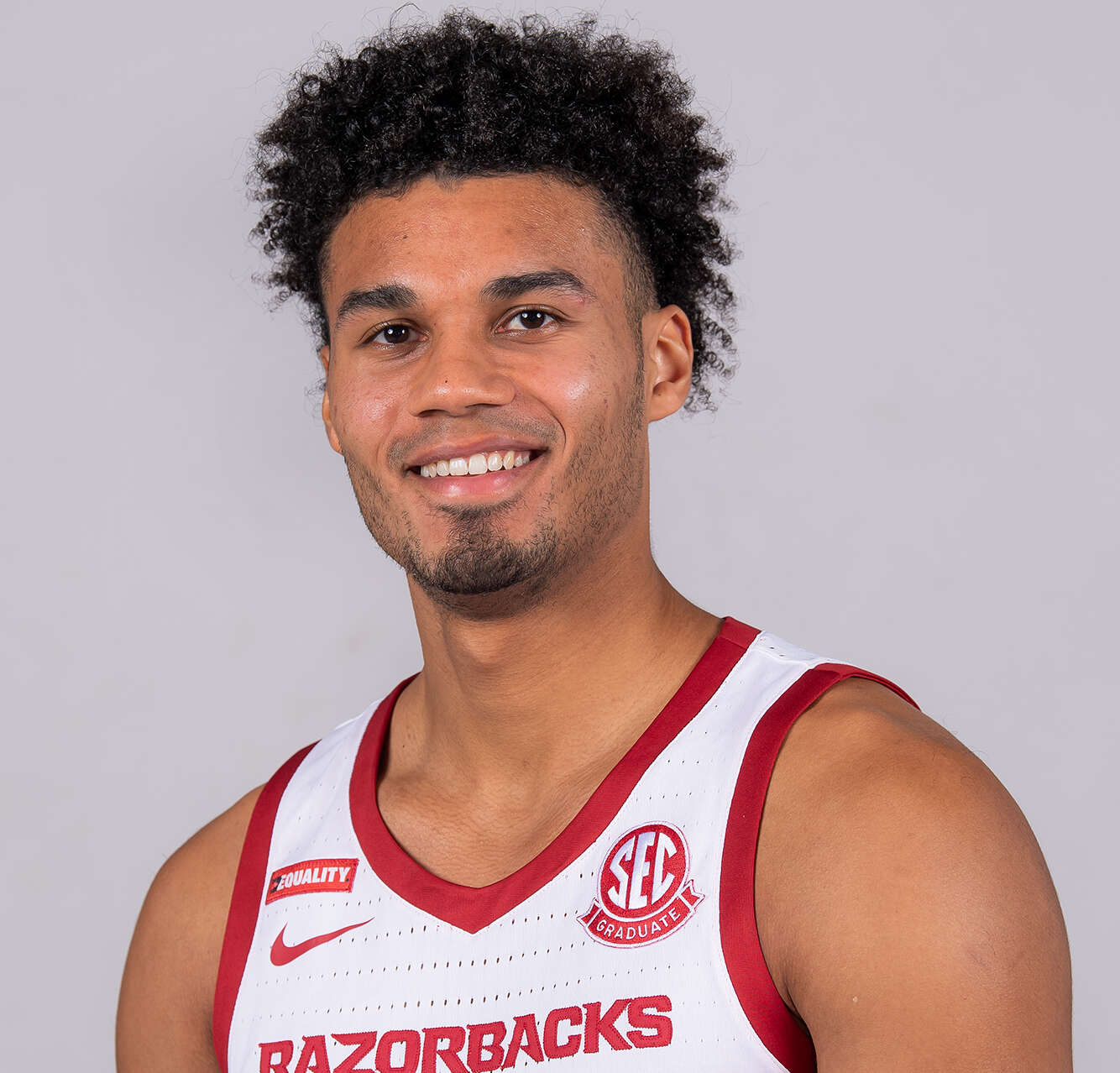 Senior (2020-21 at Arkansas):
• Named 2nd team All-SEC by USA TODAY and named to Seth Davis’ (TheAthletic.com) All-Glue Team
• Made the AD’s Honor Roll (GPA between 3.5-3.99) for Fall 2020
• Injured his right ankle in the first half at Auburn (Dec. 30) … Had surgery Jan. 1 … Missed the Mizzou, Tennessee, Georgia and LSU games (Team was 1-3) … Returned to the lineup 15 days later to start at Alabama but was still limited.
• WITH “HEALTHY” SMITH LAST 18 GAMES, Arkansas was 15-3 (with three losses by an average of 6.3 points) … Smith averaged 15.1 ppg 7.7 rpg 2.2 apg 59.3 FG%  during the span with 5Double-Doubles (2 in the  NCAA Tournament) … Also during the 18 games, scored double-digit points 17x, had 5+ rebounds 16x and had 2+ assists 13x … Career-high 27 points vs Colgate; Added 20 vs Texas Tech … Arkansas was 24-4 with Smith in the starting lineup (one of those losses was his return at Alabama) … Averaged  17.3 pts and 9.5 reb in the NCAA Tournament.
• Ranked 41st NCAA / second SEC in field goal percentage (.545) thanks to a team-best 32 dunks.
• Led the team and was sixth in the SEC in rebounding (7.3 avg.) — 26th NCAA / second in the SEC in off rebs (3.29).
• Second on the team / 18th in the SEC in scoring (13.6 avg.) — Had career bests in scoring (13.6), rebounding (7.2). assists (49), steals (34) and blocked shots (18).
• Has a team-best +10.07 Plus-Minus per 40 minutes
• Scored Arkansas’ first points of the 2020-21 season … Finished with 13 versus Mississippi Valley and tied career high with three steals
• Led the Razorbacks with 18 points and 14 deflections versus North Texas, making 2-of-3 from 3-point range
• Tied for the team lead with nine rebounds, including six offensive boards, versus UTA
• Had two dunks versus Southern — Both making ESPN’s Top 10 Plays • Posted double-double versus Oral Roberts … Led all players with a season-high 22 points and a career-high 17 rebounds, including 10 offensive boards … First Razorback with at least 22 points and 17 rebounds since Nick Davis (Nov. 21, 1997)
• Followed that with a 10-rebound performance versus Abilene Christian
• Only played 11:47 in the first half at Auburn before exiting with an ankle injury but had four points, four rebounds and an assist
• In his first fully healthy game since the surgery; had 12 points and seven rebounds at Vanderbilt … Had five offensive boards (team had 11)
• Led Arkansas in points (18), rebounds (7) and assists (4) at Oklahoma State … Tied career-high with four assists
• Tallied his second double-double of the year with 10 points and 10 rebounds versus Mississippi State … Scored all 10 points in the second half … Tied a season high with seven defensive boards
• At Missouri, he led the team in both scoring (19) and rebounds (6) … Struggled early with his only points being two free throws in the first half — which put him over 1,000 for his career … He scored 11 second-half points and six of the team’s 13 points in overtime .. He made both field goals in OT and made two free throws with three seconds left to seal the win … Made a career-high six free throws
• Posted the team’s best deflection total of the year with 15 versus Florida … Had a career-high five steals and tied his career-high with four assists … Was 7-f-9 from the field ad scored 15 points
• Recorded his third double-double of the year in the win over Alabama … Scored 11 of his 12 points in the second half and had seven of his 12 rebounds in the frame .. Had three dunks in the game
• For the second straight game, posted a double-double — his fourth of the year — with a team-best 19 points and 10 rebounds … Helped the Hogs out-score the Tigers 51-38 in the second half as 12 of his 19 came in the period, making 5-of-6 shots and both free throws … Added 10 deflections
• Had his third-straight impressive performance at South Carolina … Tied his season high with 22 points, which is his best in an SEC game, and he tied a career high with six free throws made … His eight field goals made were his best in an SEC game … Tied for the team lead with eight rebounds
• Only scored 11 in the season finale versus Texas A&M, but had nine in the second half (4-of-5 shooting) in the second half as the Hogs completed a come-from-behind win … Played all 40 minutes
• In SEC quarters vs Mizzou, had 16 pts, tied for team-high 8 rebs, with 3 assists, two steals, a blocked shot and he took two charges … Was 6-of-7 shooting in the 2nd half with 13 of 16 points and all eight rebounds
• In the SEC semis vs LSU, had 21 points (10-of-13 shooting) with seven boards and two assists … Scored 15 of 21 pts in second half (7-of-9 shooting)
• Played all 40 minutes vs Colgate in the NCAA, had a career-high 27 points – going a career-best 11-of-13 at the free throw line – and 12 rebounds for his fifth double-double of the year and fourth in the last 11 games … Tied his career-high with five steals and added two blocked shots to become just the second player to record 27-plus points, 12-plus rebounds, 5-plus steals and 2-plus blocks in an NCAA Tournament game, joining Kansas great Danny Manning in the 1988 championship game
• Led the team with 20 points (9-of-11 shooting) with six rebounds
• Posted a double-double vs ORU in the Sweet 16 with 12 points and 14 rebounds (11 offensive) • Tied for the team lad with six rebounds, adding 10 points, three assists and two steals vs Baylor in the Elite 8.

Junior (2019-20 at Indiana):
Started all 32 games … Led the team in steals (31) and minutes played (971) … Averaged 10.4 points and tied for second on the team with 5.2 rebounds per game … Named IU’s athletic department’s Male Student-Athlete of the Month for January … Tied his career-high with 24 points and with a career-high three steals, adding seven boards, against Western Illinois … Notched 18 points and eight rebounds (five offensive) against Portland State … Scored a team-high 22 points in a win over Troy, making 8-of-9 field goals, both of his 3-point attempts and all four free throw attempts while tying a career-high with three steals … Finished with 18 points and eight boards against South Dakota State … Posted another solid effort with 14 points and five rebounds against Florida State … Logged a double-double with 16 points and 10 boards against Nebraska … Pulled down eight rebounds against  Arkansas … Finished with 18 points, six rebounds and three steals against Northwestern … Posted a team-high 15 points with seven boards at Rutgers … Tallied 15 points, seven rebounds and two assists at Nebraska … Finished with 13 points and seven rebounds at Penn State … Only had six points with seven boards but was credited with playing lock-down defense against Iowa … Also played outstanding defense and with nine points, eight boards and two steals against Penn State … Had 12 points and six rebounds against Nebraska in the Big Ten Tournament.

Sophomore (2018-19 at Indiana):
Earned 2019 Academic All-Big Ten … Played in all 35 games and started 32 times … Fifth on the team averaging 8.2 points and third on the team averaging 4.5 rebounds … Added 22 steals … Pulled down nine rebounds at Penn State and versus Louisville and versus Michigan … Posted a season-high 15 points and added six boards at Purdue … Had two double-doubles for the season … The first was scoring 10 points and tying a career-high with 12 rebounds at Northwestern … The second was at Michigan – and perhaps his best overall game as a Hoosier – as he scored 13 points with 10 rebounds while adding two assists and three blocks, including a game-saving deflection with 3.4 seconds left on a layup … Recorded a career-high 24 points against Michigan State, hitting a career-best three 3-pointers … Had 15 points and seven boards at Illinois … Tallied a career-high three assists against Rutgers … Just missed another double-double with 10 points and nine rebounds against St. Francis in the NIT.

Freshman (2017-18 at Indiana):
Emerged as the top freshman to help the Hoosiers … Played in all 31 games and started 9 times … Averaged 6.5 points and shot 55.0% from the floor … Third on the team in scoring in Big Ten play, averaging 7.8 points … Shot 55.3% from the field in conference play …  Notched his first career double-double with 16 points and 12 rebounds against Howard … Made his first career start at Seton Hall and had 10 points with four rebounds … Logged his second career start at Minnesota and finished with a season-high 20 points … Knocked in a go-ahead triple in the closing minutes versus the Gophers … Finished with 13 points and three rebounds in 13 minutes against Illinois … Had 15 points and three rebounds at Iowa … Tallied 16 points and eight rebounds at Nebraska … Scored 16 points against Ohio State.

High School:
A 2017 graduate of Adlai Stevenson High School … Ranked No. 91 overall in the class by Rivals.com … As a senior, averaged 21 points and nearly 10 rebounds … Logged 16 double-doubles during his senior year … Received second team All-State for Class 4A by the Associated Press … Two-time Lake County Player of the Year by the Daily Herald … During his junior year, posted averages of 17 points, eight rebounds and two assists … Helped Stevenson to the Illinois state title as a sophomore … Played AAU basketball for the Mac Irvin Fire program.