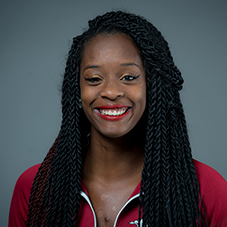 As A Sophomore (2014)
Competed in five meets in her second year with the Razorbacks after missing most of the offseason with an injury … Set a career-high on the bars with a 9.85 at Georgia … Her score counted in four of her five bar routines.

As A Freshman (2013)
Joined the team in December, competed in the bars and the beam … Became just the third Razorback newcomer to be named to the SEC All-Freshman Team, joining Katherine Grable and Sydnie Dillard … Set a career-high in the beam with a 9.85 at a quad meet featuring Missouri, Centenary and Lindenwood … Scored a career-best 9.80 on the bars three times her freshman year (Alabama, SEC Championship, NCAA Championship … Her 9.80 on the bars at the SEC Championship served as one of the top marks in the meet … Helped the Razorbacks beam team be ranked as high as No. 8 during the season.