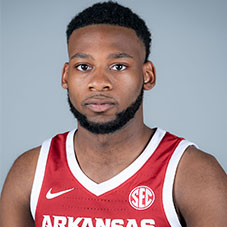 2018-19 (Fr.):
Played in 33 games, missing the SEC Tournament game versus Florida due to an ankle injury … At Texas Tech, was the first sub off the bench for the first time and was been first sub (solo or tied) in seven of the next 11 games … Had career-highs in points with 16 on two occasions (at Ole Miss and at LSU) … Hit a clutch 3-pointer with 14 seconds left to lift Razorbacks to win over Vanderbilt at home … Scored seven points versus UC Davis, including five in the second half … Posted season highs versus FIU with three assists and three steals, while scoring seven points and adding three rebounds … Pumped in a then season-best 14 points at Colorado State, including eight in the first half to keep the Razorbacks in the lead while Daniel Gafford was on the bench in foul trouble … Was 5-of-6 from the field, including 4-of-5 from 3-point range … Matched his then season high with 14 points versus Austin Peay … All came in the second half (nine minutes of play) … More specifically, scored 12 points — including seven straight — during a 20-5 run to lead the Razorbacks to the win … At Ole Miss, scored a career-high 16 points — 12 in the second half … Tied his career high with 16 points at LSU with career highs for field goals made (6) and 3-pointers made (4) … Scored 13 of those in the first half, going 5-of-6 from the field and 3-of-3 from 3-point range … Made two field goals versus Vanderbilt, but one of his two field goals made was huge … The Commodores were up two (66-64) with 40 seconds left, Arkansas called timeout … Embery-Simpson, who had been sitting on the bench for over four minutes due to injury, checked into the game during the stoppage and, 20 seconds later, hit the biggest shot of his young career to put his squad up one with 14 seconds left … Earned first “second-half start” at Auburn and tied career high with 22 minutes played … Only played eight minutes at Kentucky, but had two steals, tying a season-best in SEC play … After spraining his ankle in practice prior to Florida at SEC Tournament and missing that game, returned to the floor at Providence and played six minutes (three each half) … However, the first time he touched the ball, drained a 3-pointer as part of an 8-0 run for an 11-point lead seven minutes into the game.

Prior to Arkansas
Listed as a four-star recruit by 247Sports.com, Rivals.com and Future150.com … 247Sports.com also tabbed him the 22nd-best point guard in the nation and 13th-best prospect in the state of Florida … As a junior at Midwest City HS, averaged 26.8 points and 5.6 rebounds while earning a spot on The Oklahoman’s Super 5 … While at Midwest City, ranked as the No. 1 player in the state of Oklahoma by 247Sports.com and Future150.com.

Personal
Born on May 26, 1999, in Midwest City, Okla. … Son of Jermaine and Keisha Simpson … Has one sister, Ada Rae Simpson … Majoring in communications.