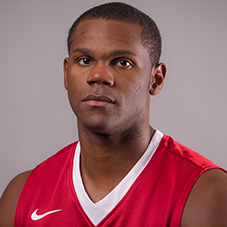 Played in all 36 games, starting 23 … averaged 6.0 points per game … second on the team in rebounding, averaging 4.0 boards per game … led the team with 45 steals … recorded a 3.30 assist-to-turnover ratio, the best on the team …  had just 20 turnovers in 802 minutes, averaging one turnover per 40.1 minutes of action … finished with fourth-best assist/turnover ratio in school history, recording 172 assists and just 74 turnovers in 1960 career minutes … scored a season-high 13 points, to go along with three rebounds, two steals and two assists in Arkansas’ win over Texas A&M (Feb. 22) … tied a career-high with five assists in Arkansas’ win over Ole Miss (Feb. 18) … clinched a road victory at No. 21 South Carolina (Feb. 15) on a jumper with 23 seconds left as the shot clock expired … was 0-of-8 from behind the arc in his first 92 games as a Razorback, before sinking 13-of-28 (.464) attempts in his final 20 games, including a 3-for-3 performance at Texas A&M (Jan. 17) … pulled down five or more rebounds in six of the last seven games, including a season-high eight boards in the second round of the NCAA Tournament against No. 1 seed North Carolina (March 19).

Played in all 32 games, making nine starts during the 2015-16 season … averaged 5.1 points and 3.0 rebounds per game … made his first collegiate start against North Florida (Dec. 22) and scored 11 points … scored six points in upset win over No. 5 Texas A&M (Jan. 27) … had six double-digit scoring games … scored a season-high 14 points against Georgia Tech (Nov. 26) and at Wake Forest (Dec. 4) … grabbed a season-high nine rebounds against Northwestern State (Dec. 1).

Played in all 36 games, averaging 13.9 minutes and 2.6 points per contest … shot 55 percent from the field to lead the team … scored a season-high eight points in the season opener against Alabama State (Nov. 16) and at Ole Miss (Feb. 14) … hit the game-winning shot with 6.4 seconds left at Ole Miss (Feb. 14), going 4-for-4 from the field in the contest … had a season-best four steals, six rebounds and five assists at Iowa State (Dec. 4) in the Big 12/SEC Challenge … played a season-high 27 minutes at Tennessee (Jan. 13) … had multiple steals in eight games and multiple assists 11 different times … finished second on the team with 37 steals … shot 70 percent from the free throw line … averaged two rebounds per game and committed only 28 turnovers in over 500 minutes of action.

Saw time in eight games … had five points and four rebounds on the year … averaged a steal every nine minutes on the floor … had a steal in three games … hit 2-of-3 from the field and 1-of-2 at the free throw line … registered first collegiate points against Southeastern Louisiana (Dec. 3).

High School
Led Fayetteville High School to the 7A state championship game as a senior … averaged 15 points and six rebounds per game … named to the All-Arkansas Boys Basketball first team … helped lead Arkansas Wings Elite to the AAU National Championship in the summer of 2012, playing alongside Bobby Portis and Moses Kingsley.

Personal
Born on Oct. 24, 1994 … son of Melvin and Burrell Watkins … father is the Associate Head Coach on the Arkansas staff … born in Charlotte, N.C. … has an older sister, Keia, and an older brother, Marcus … his brother played basketball at Missouri … majoring in supply chain management.