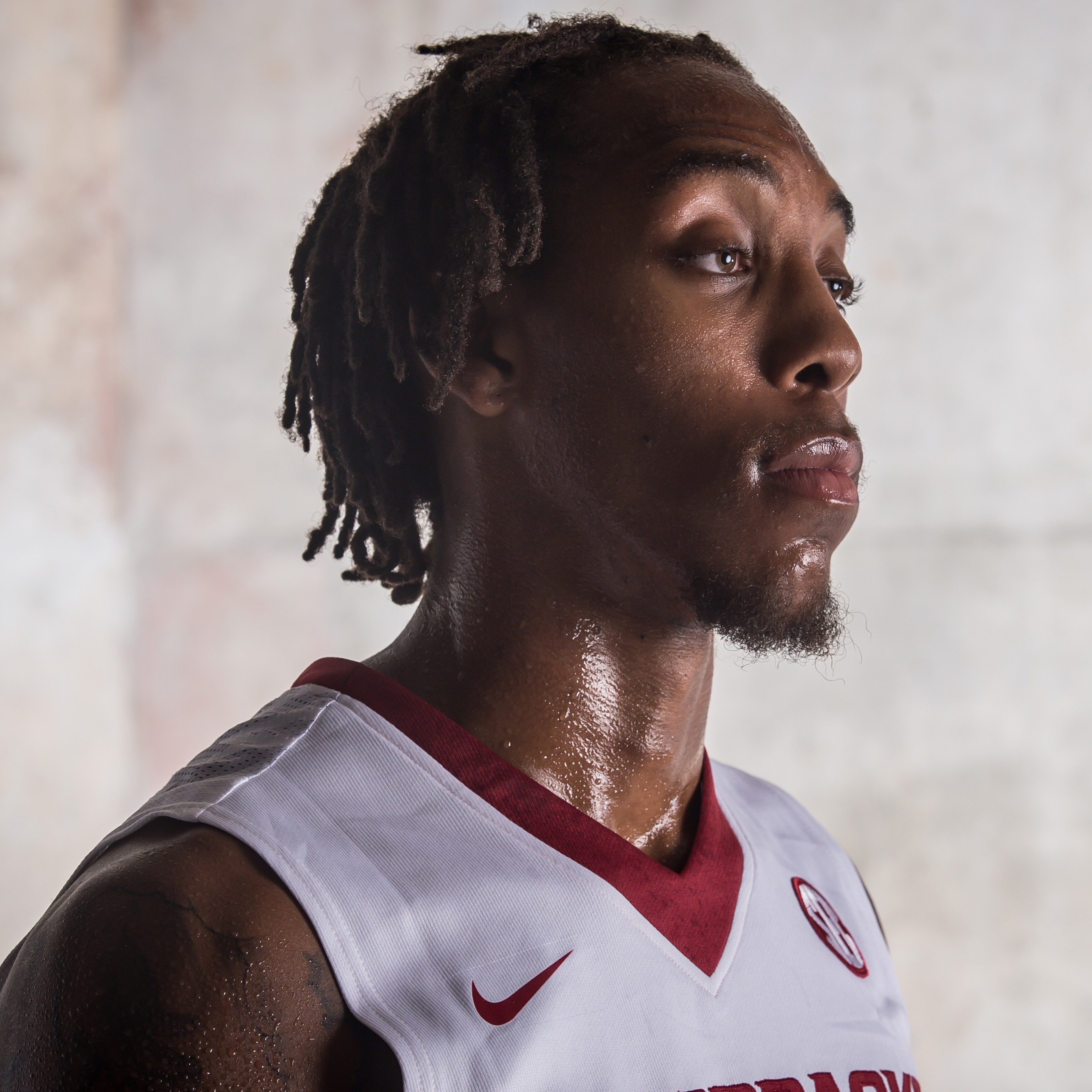 MUST SEE TV
Over his last two seasons (70 games), Qualls appeared on SportsCenter’s Top 10 Plays (#SCtop10) a remarkable 13 times. Qualls landed on seven of the top 10 spots, highlighted by the top spot on Jan. 14, 2014, for his put-back dunk with 0.4 seconds left in overtime that gave Arkansas an 87-85 win over Kentucky at Bud Walton Arena.

As A Junior (2014-15)
• Averaged 23.5 points in the NCAA Tournament, good for second amongst players with two more or more games in the tournament
• Collected first career double-double in his 100th career game, going for 27 points and a career-best 10 rebounds against North Carolina in the NCAA Tournament third round
• 22nd player in Arkansas history to score 20 points in a NCAA Tournament game with a team-best 20 points on 8-of-9 from the field against Wofford
• Averaged a team-best 17.7 points and named to the SEC All-Tournament team
• Named to the All-SEC second team by the AP & league coaches and USBWA All-District VII squad
• Increased scoring average by 11.3 points since his freshman season
• Scored a career-high 30 points against Alabama that included eight points in overtime
• One of five SEC players to score 30 points in a game during the year
• Second on the team and sixth in the SEC in scoring at 15.9 points per game
• Fourth in the SEC with 12 20-point games – eight coming at home
• Had 14 20-point games in his last 45 contests after one of his first 55
• Reached double figures in a half 23 times (1st half – 9/2nd half – 14)
• Team leader with 38 dunks
• Arkansas was 15-4 the last two seasons when he has two dunks
• Reached double figures in 30 games
• Finished one rebound shy of a double-double six times
• Hit multiple threes in 17 contests
• Led the team on the glass eight times (7-1)
• Named the SEC Player of the Week on Dec. 1
• Scored 28 points against Northwestern State that included 21 in the second half
• Went for 21 points, six rebounds and four assists against Missouri
• Attended the LeBron James Skills Academy and the Kevin Durant Camp in the summer

As A Sophomore (2013-14)
Turned in a breakout second season … ranked in the top three on the team in scoring (11.6), rebounding (4.5), assists (1.9) and three-pointers made (42) … reached double figures 24 times, including a trio of 20-point performances … appeared on SportsCenter’s Top 10 Plays eight different times, highlighted by the No. 1 play during a win over Kentucky (Jan. 14) in which he converted a go-ahead put-back dunk with 0.2 seconds left in overtime … led the team with 33 dunks … Arkansas was 7-1 when he dunked at least twice in a game … hit a second-game winning shot in SEC action, drilling a three-pointer at Vanderbilt (Feb. 8) with 2.6 seconds left for a 77-75 victory … shot 35 percent (42-120) from three, making a triple in 21 contests … led the team in scoring eight times, rebounding three times and assists in 10 different games … reached double-digit points in a single half 11 times … also finished second on the team with 54 offensive rebounds while adding 31 steals and 17 blocks … set or equaled a career-high in points in each of the first four games, highlighted by 21 points, including 17 in the second half, against Cal (Nov. 25) at the EA SPORTS Maui Invitational … other two 20-point games came in SEC home wins against South Carolina (Feb. 19) and Georgia (March 1) … scored 500th career point against South Carolina … opened the season with eight straight double figure outings and closed with double-digit points in nine of the last 12 games.

As A Freshman (2012-13)
Role increased as season evolved … saw time in all 31 games, making five starts … led the freshmen class in minutes played (15.6) en route to averages of 4.6 points and 3.4 rebounds … reached double figures five times, including the last two games of the season … fourth on the team with 21 blocks and also added 23 steals … second on the team with 20 dunks … finished with a 40 percent (55-137) clip from the field … averaged 8.0 points and 6.2 rebounds in five games as a starter … led the squad in rebounding five times, grabbing a season-high 11 boards in a win over Tennessee (Feb. 2) … hauled in an offensive rebound in 19 contests, finishing with 30 on the year … had a steal in 16 games and at least one block 13 times … had eight points and a season-best four blocks in first collegiate game against Sam Houston State (Nov. 9) … scored 10 points in 14 minutes vs. Longwood (Nov. 18) … stuffed the box score in 15 minutes against Alcorn State (Dec. 15) with 10 points, seven rebounds, including six offensive, four assists and three steals … followed 11-rebound effort against Tennessee in his first career start with 11 points in a home win over No. 2 Florida (Feb. 5) … led the team in rebounding in back-to-back road games at Florida (Feb. 23) and at LSU (Feb. 27) … finished off the year with a season-high 13 points in the regular season finale against Texas A&M (March 9) and 10 points vs. Vanderbilt (March 14) at the SEC Tournament … named one of five under-the-radar-freshmen by CBS New York prior to the year.

High School
Three-time District MVP and three-time Tournament MVP at Huntington High School … third-ranked player in the state of Louisiana in the class of 2012, with an ESPN.com scout grade of 89 … led Huntington to four district championships … All-State first team choice as a senior and second team as a junior … averaged 17.8 points per game as a senior, guiding Huntington to 33 wins … the Raiders ranked No. 1 in the state his freshman year and No. 7 during his junior campaign … holds the Huntington record for triple-doubles … dropped a career-high of 40 points in a game and had a career-best of 26 rebounds … graduated with a 3.8 grade-point average (GPA) to finish in the top 12 of his graduating class.