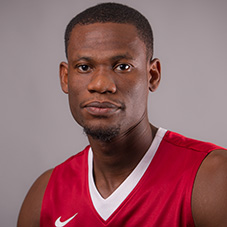 Was the only Razorback to start all 36 games, averaging 12.0 points and 7.7 rebounds per game … became the ninth player in program history to earn All-SEC honors in consecutive seasons, including the third individual in the last 10 years … is the first player in program history to earn multiple selections to the SEC All-Defensive Team … finished with 1,200 career points, good for 25th in school history … joined Oliver Miller as the only two players in program history to reach 1,000 points, 600 rebounds and 200 blocks in a career … pulled down 768 career rebounds, good for sixth in program history … played in 136 career games, the third most ever by a Razorback … finished his career as the SEC’s active leader with 254 blocks, the fourth most in program history … recorded seven double-doubles on the year to end his career with 24 total … recorded 26 multi-block games, including 16 of the final 20 games … led the SEC and ranked 13th in the country in blocked shots at 2.58 swats per game … tied for seventh in the nation with 17 games of three or more blocks … tallied multiple offensive rebounds in 21 contests and pulled down at least one offensive rebound in 20 of the last 22 games … first player in Razorback history to record at least 23 points, six rebounds and four blocks in an NCAA Tournament game when Arkansas knocked off Seton Hall (March 17) … scored a season-high 24 points and attempted a career-high 18 field goals in a win over LSU (Jan. 21) … went 11-of-12 from the charity stripe against Alabama (Feb. 1) … tied his career high with 14 rebounds against No. 25 Florida (Dec. 29) … assisted on a career-high five baskets versus Austin Peay (Dec. 3).

Played in all 32 games, averaging 15.9 points and 9.3 rebounds per game … one of eight high-major players with 16 double-doubles on the year … was one of four players in the country and the only high-major individual with multiple games of 20 points, 10 rebounds and five assists … reached double figures in points in 30 of 32 games and reached the 20-point mark seven times … finished the regular season as one of five high-major players in the country averaging at least 16.0 points and 9.0 rebounds per game … was the first player in school history with two 8-for-8 or better shooting performances in a career when he did so against Southern University (Nov. 13) and at Missouri (Jan. 12) … was the first Arkansas player since 2008-09 to have consecutive 12-plus rebound games to start the year …  recorded a block in 31 of 32 games and ranked second in the SEC with 76 blocks on the season … scored a career-high 26 points at Dayton (Dec. 30), going 9-for-13 from the field and 8-for-9 from the charity stripe, while adding 11 rebounds and three blocks … pulled down a career-high 14 rebounds against Mercer (Dec. 19) and Florida (March 10) in the second round of the SEC Tournament … recorded a career-high eight blocks against Tennessee Tech (Dec. 12) … became the first Razorback in six years to open the season with consecutive double-doubles.

Played in all 36 games with four starts … averaged 3.6 points and 2.5 rebounds per game … finished second on the team with 38 blocks on the year … had three or more blocks in five games, including a season-high five blocks at Mississippi State (Feb. 21) … registered a block in 22-of-36 games played … reached double figures twice, scoring 10 points against Wake Forest (Nov. 19) and Utah Valley (Jan. 3) … pulled down a season-high eight rebounds and played a season-high 21 minutes against North Texas (Nov. 28) … shot 48 percent from the field and 62 percent from the free throw line.

Averaged 4.0 points and 3.2 rebounds over 32 games played … finished second on the team with 49 rejections and seventh in the SEC at 1.5 per game … averaged a block every 7.5 minutes on the floor … turned away at least one shot in 25 of 32 games, including 13 multi-block performances … led the team in rebounding four times, highlighted by first career double-double vs. UT Martin (Dec. 19) that included season-highs of 12 points and 12 rebounds … fourth on the team with 39 offensive rebounds despite playing the 11th-most minutes (11.5) … both double figure scoring games came in non-conference play against UT Martin and High Point (Dec. 28) … came off the bench for nine points and seven rebounds vs. Gonzaga at the EA SPORTS Maui Invitational … blocked a season-best five shots vs. Savannah State (Dec. 12) while adding seven boards … led the team on the glass against Ole Miss (March 5) with eight boards in 14 minutes of work … had seven points and four blocks against South Carolina (March 13) at the SEC Tournament.

High School
Ranked as a top 50 recruit in the 2013 class by 247Sports.com, Scout.com (No. 40) and ESPN.com (No. 43) … rated as high as No. 30 by 247Sports.com … top-ranked player in the state of Mississippi in 2013, with an ESPN.com scout grade of 88 … attended Huntington Prep in West Virginia for senior year in 2012-13, averaging 8.3 points, 8.4 rebounds and 4.1 blocks per game … played alongside Kansas signee and top-ranked recruit Andrew Wiggins … led Huntington Prep with 130 blocks, turning away five or more shots in 14 games … posted six double-doubles and scored 20+ points twice … reached double figures 11 times … had season-highs of 26 points and 15 rebounds against Arlington Country Day HS of Jacksonville … led the Arkansas Wings Elite to the AAU National Championship in the summer of 2012, playing alongside Bobby Portis and Manuale Watkins.

Personal
Born on Nov. 16, 1994 … son of Moses and Gladys Okonkwo … born in Enugu, Nigeria … moved to Mississippi in the 10th grade … has three brothers: Eric, Emmanuel and Levi … also has two sisters; Salome and Faith … majoring in recreation and sport management.